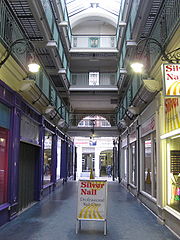 Silver Arcade is a Grade II listed building in the centre
Leicester City Centre
Leicester City Centre is an area covering the core inner city area and central business district of the city of Leicester, England. It is roughly delineated from Leicester's suburbs by the A594, Leicester's inner ring road....
of Leicester
Leicester
Leicester is a city and unitary authority in the East Midlands of England, and the county town of Leicestershire. The city lies on the River Soar and at the edge of the National Forest...
, England
England
England is a country that is part of the United Kingdom. It shares land borders with Scotland to the north and Wales to the west; the Irish Sea is to the north west, the Celtic Sea to the south west, with the North Sea to the east and the English Channel to the south separating it from continental...
. A former shopping arcade, Silver Arcade was built by Amos Hall in 1889. The top floor was closed off in 2000, leaving the units on the ground floor occupied by a number of independent retailers. In 2008, the centre was the focus of a campaign by the Leicester Civic Society to reopen it.
In 2010, plans were announced to reopen the top floors.
The source of this article is wikipedia, the free encyclopedia.  The text of this article is licensed under the GFDL.