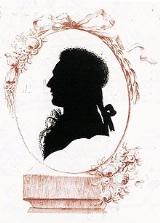 Overview
A silhouette is the image of a person, an object or scene consisting of the outline and a basically featureless interior, with the silhouetted object usually being black. Although the art form has been popular since the mid-18th century, the term “silhouette” was seldom used until the early decades of the 19th century. Silhouette images may be created in any artistic media, but the tradition of cutting portraits from black card has continued into the 21st century.

From its original graphic meaning, the term "silhouette" has been extended to describe the sight or representation of a person, object or scene that is backlit, and appears dark against a lighter background.

I have in my a matching pair of rainbow silhouettes and they are dated 1932. They are two pixies one is playing a small triangular chime and the other...
More
x