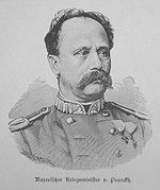 Encyclopedia
Siegmund Freiherr von Pranckh (5 December 1821, Altötting
Altötting
Altötting is a town in Bavaria, capital of the district Altötting.This small town is famous for the Gnadenkapelle , one of the most-visited shrines in Germany. This is a tiny octagonal chapel which keeps a venerated statue of the Virgin Mary...
, Upper Bavaria – May 8, 1888, Munich) was a Bavarian general and Minister of War. Pranckh joined the army in Munich in 1840 from the cadet corps and in 1849 (having risen to captain) worked on the staff of the Generalquartiermeister. He remained in the War Department until 1863 before entering the 3rd Infantry Regiment as an oberst
Oberst
Oberst is a military rank in several German-speaking and Scandinavian countries, equivalent to Colonel. It is currently used by both the ground and air forces of Austria, Germany, Switzerland, Denmark and Norway. The Swedish rank överste is a direct translation, as are the Finnish rank eversti...
and then in 1865 entered the Lifeguards Regiment
Royal Bavarian Infantry Lifeguards Regiment
The Royal Bavarian Infantry Lifeguards Regiment was a household-bodyguard regiment of the Bavarian kings from the end of the Napoleonic Wars until the fall of the Wittelsbach monarchy and the related resolution of the Bavarian army.- Predecessors :...
, with which he fought in the Austro-Prussian War
Austro-Prussian War
The Austro-Prussian War was a war fought in 1866 between the German Confederation under the leadership of the Austrian Empire and its German allies on one side and the Kingdom of Prussia with its German allies and Italy on the...
, participating in the battle of Kissingen and the storming of Nüdlingen. Shortly afterwards, Pranckh (as war minister) and in 1868 reorganised
Bavarian Army Reform (1868)
After the experience of the Bavarian army in the war against Prussia, in 1868 the Bavarian War Minister Siegmund Freiherr von Pranckh fundamentally reformed the army...
the Bavarian Army.

Immediately after the outbreak of the Franco-Prussian War
Franco-Prussian War
The Franco-Prussian War or Franco-German War, often referred to in France as the 1870 War was a conflict between the Second French Empire and the Kingdom of Prussia. Prussia was aided by the North German Confederation, of which it was a member, and the South German states of Baden, Württemberg and...
he rose to Lieutenant General, and prudently and effectively organized the Bavarian army and its munitions after it had suffered considerable losses. He was also significantly involved in the conclusion of the Treaty of Versailles
Treaty of Versailles of 1871
The Treaty of Versailles of 1871 ended the Franco-Prussian War and was signed by Adolphe Thiers, of the French Third Republic, and Otto von Bismarck, of the German Empire on February 26, 1871. This was a preliminary treaty used to solidify the initial armistice of January 27, 1871 between the two...
on 23 November 1870. For his achievements he was granted an endowment of 100,000 crowns from the war compensation awards.

He is buried in the Old Southern Cemetery
Alter Südfriedhof
The Alter Südfriedhof is a cemetery in Munich, Germany. It was founded by Duke Albrecht V as a plague cemetery in 1563 about half a kilometer south of the Sendlinger Gate between Thalkirchner and Pestalozzistraße.-History:...
in Munich.