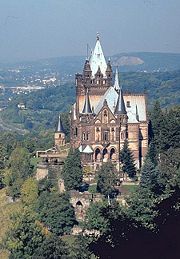 The Siebengebirge is a German
Germany
Germany , officially the Federal Republic of Germany , is a federal parliamentary republic in Europe. The country consists of 16 states while the capital and largest city is Berlin. Germany covers an area of 357,021 km2 and has a largely temperate seasonal climate...
range of hills to the East of the Rhine, southeast of Bonn
Bonn
Bonn is the 19th largest city in Germany. Located in the Cologne/Bonn Region, about 25 kilometres south of Cologne on the river Rhine in the State of North Rhine-Westphalia, it was the capital of West Germany from 1949 to 1990 and the official seat of government of united Germany from 1990 to 1999....
, consisting of more than 40 mountains and hills. It is located in the municipalities of Bad Honnef
Bad Honnef
Bad Honnef is a spa town in Germany near Bonn in the Rhein-Sieg district, North Rhine-Westphalia. It is located on the border of the neighbouring state Rhineland-Palatinate...
and Königswinter
Königswinter
Königswinter is a town and summer resort in the Rhein-Sieg district, in North Rhine-Westphalia, Germany. It is situated on the right bank of the Rhine, opposite to Bonn, at the foot of the Siebengebirge.- Main sights :...
. It is of volcanic
Volcano
2. Bedrock3. Conduit 4. Base5. Sill6. Dike7. Layers of ash emitted by the volcano8. Flank| 9. Layers of lava emitted by the volcano10. Throat11. Parasitic cone12. Lava flow13. Vent14. Crater15...
origin and came into being between 28 and 15 million years ago. Much of the territory covered by the Siebengebirge belongs to the Naturpark Siebengebirge, which is under environmental protection.

The highest peak is the Ölberg at 460 metres. It is a popular tourist
Tourism
Tourism is travel for recreational, leisure or business purposes. The World Tourism Organization defines tourists as people "traveling to and staying in places outside their usual environment for not more than one consecutive year for leisure, business and other purposes".Tourism has become a...
destination for hiking, because of its natural beauty. Large parts of the range are part of the Siebengebirge nature reserve and are subject to environmental protection regulations.

The seven most important hills:


Other mountains and hills:

Origin of the name

The origin of the name Siebengebirge is disputed. Four theories exist: