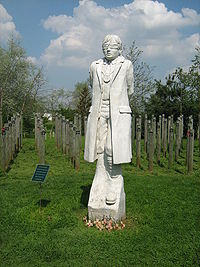 The Shot at Dawn Memorial is a British
United Kingdom
The United Kingdom of Great Britain and Northern IrelandIn the United Kingdom and Dependencies, other languages have been officially recognised as legitimate autochthonous languages under the European Charter for Regional or Minority Languages...
Monument at the National Memorial Arboretum
National Memorial Arboretum
The National Memorial Arboretum is a national site of remembrance at Alrewas, near Lichfield, Staffordshire, England. It gives its purpose as:-Origins:...
near Alrewas
Alrewas
Alrewas is a large village and civil parish within Lichfield District, in Staffordshire, England. It lies on the A38 road, approximately 5 miles north of Lichfield...
, in Staffordshire
Staffordshire
Staffordshire is a landlocked county in the West Midlands region of England. For Eurostat purposes, the county is a NUTS 3 region and is one of four counties or unitary districts that comprise the "Shropshire and Staffordshire" NUTS 2 region. Part of the National Forest lies within its borders...
, UK in memory of the 306 British and Commonwealth
Commonwealth of Nations
The Commonwealth of Nations, normally referred to as the Commonwealth and formerly known as the British Commonwealth, is an intergovernmental organisation of fifty-four independent member states...
soldiers executed after courts-martial for cowardice
Cowardice
Cowardice is the perceived failure to demonstrate sufficient mental robustness and courage in the face of a challenge. Under many military codes of justice, cowardice in the face of combat is a crime punishable by death...
and desertion
Desertion
In military terminology, desertion is the abandonment of a "duty" or post without permission and is done with the intention of not returning...
during World War I
World War I
World War I , which was predominantly called the World War or the Great War from its occurrence until 1939, and the First World War or World War I thereafter, was a major war centred in Europe that began on 28 July 1914 and lasted until 11 November 1918...
. The real usual cause for their offences has been re-attributed in modern times to post-traumatic stress syndrome and combat stress reaction
Combat stress reaction
Combat stress reaction , in the past commonly known as shell shock or battle fatigue, is a range of behaviours resulting from the stress of battle which decrease the combatant's fighting efficiency. The most common symptoms are fatigue, slower reaction times, indecision, disconnection from one's...
.

The memorial portrays a young British soldier blindfolded and tied to a stake ready to be shot by a firing squad. The memorial was modelled on the likeness of 17-year-old Private Herbert Burden, who lied about his age to enlist in the armed forces and was later shot for desertion
Desertion
In military terminology, desertion is the abandonment of a "duty" or post without permission and is done with the intention of not returning...
. It is surrounded by a semicircle of stakes on which are listed the names of every soldier executed in this fashion. These included: Harry Farr
Harry Farr
Private Harry Farr was a British soldier who was executed during World War I for cowardice at age 25. He came from Kensington in London and was in the 1st Battalion, the West Yorkshire Regiment.-Background:...
, Thomas Highgate
Thomas Highgate
Private Thomas James Highgate was a British soldier during the early days of the First World War, and the first British soldier to be convicted of desertion and executed during that war...
, Eric Poole
Eric Poole
Eric Skeffington Poole , was a Second Lieutenant in the West Yorkshires, was one of only three British officers executed during the First World War....
, Lance Corporal Peter Goggins
Peter Goggins
Lance Corporal Peter Goggins was a British soldier who was executed for desertion during the First World War. His case later became a well publicised example of the perceived injustices of British military discipline during the war, and he was pardoned in 2006.Born in South Moor, Durham, Goggins...
and Victor Spencer
Victor Spencer
Victor Manson Spencer was a volunteer from Invercargill, New Zealand who fought in the Otago Regiment of the New Zealand Division in World War I. Victor was executed for desertion in February 1918, despite later suggestions that he was severely traumatised by shellshock, having fought and survived...
.

The memorial was created by the artist Andy De Comyn and was unveiled by Mrs. Gertrude Harris, daughter of Private Farr, in June 2001. Mrs. Marina Brewis, the great niece of Lance Corporal Goggins, also attended the service.