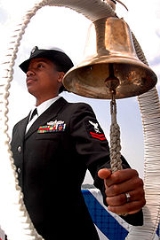 Encyclopedia
A ship's bell is usually made of bronze, and often has the ship's name engraved or cast on it. The ship's cook (or his staff) traditionally has the job of shining the ship's bell.

Strikes of a ship's bell are used to indicate the hour
Time
Time is a part of the measuring system used to sequence events, to compare the durations of events and the intervals between them, and to quantify rates of change such as the motions of objects....
aboard a ship
Ship
Since the end of the age of sail a ship has been any large buoyant marine vessel. Ships are generally distinguished from boats based on size and cargo or passenger capacity. Ships are used on lakes, seas, and rivers for a variety of activities, such as the transport of people or goods, fishing,...
and thereby to regulate the sailors' duty watches. 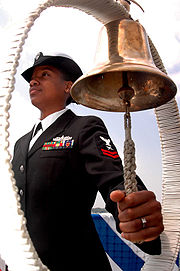 Unlike civil clock
Clock
A clock is an instrument used to indicate, keep, and co-ordinate time. The word clock is derived ultimately from the Celtic words clagan and clocca meaning "bell". A silent instrument missing such a mechanism has traditionally been known as a timepiece...
bells, the strikes of the bell do not accord to the number of the hour. Instead, there are eight bells, one for each half-hour of a four-hour watch. In the age of sailing, watches were timed with a thirty-minute hourglass. Bells would be struck every time the glass was turned, and in a pattern of pairs for easier counting, with any odd bells at the end of the sequence.

The classical system was:
† British usage after the Nore mutiny

‡ Before the introduction of time zones noon was not struck by the glass, but when the captain or officer of the deck confirmed local noon by the sun, using a sextant
Sextant
A sextant is an instrument used to measure the angle between any two visible objects. Its primary use is to determine the angle between a celestial object and the horizon which is known as the altitude. Making this measurement is known as sighting the object, shooting the object, or taking a sight...

At midnight on New Year's Eve sixteen bells would be struck – eight bells for the old year and eight bells for the new.
Most of the crew of a ship would be divided up into between two and four groups called watches. Each watch would take its turn with the essential activities of manning the helm, navigating, trimming sails, and keeping a lookout.
The hours between 16:00 and 20:00 are so arranged because that watch (the "dog watch
Dog watch
Dog watch, in marine or naval terminology, is a watch, a period of work duty or a work shift, between 1600 and 2000 . This period is split into two, with the first dog watch from 1600 to 1800 and the second dog watch from 1800 to 2000...
") was divided into two. The odd number of watches aimed to give each man a different watch each day. It also allows the entire crew of a vessel to eat an evening meal, the normal time being at 1700 with First Dog watchmen eating at 1800.

Some "ship's bell" clocks use a simpler system: 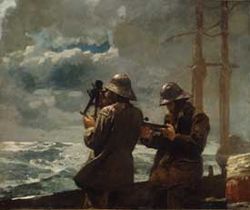 The term "Eight bells" can also be a way of saying that a sailor's watch is over, for instance, in his or her obituary. It is a nautical euphemism for "finished".

Ship's bells are also used for safety in foggy conditions, their most important modern use. On naval vessels, bells additionally are rung as "boat gongs" for officers and dignitaries coming aboard or leaving the ship, in a number equivalent to the number of sideboy
Sideboy
A side boy is a member of an even-numbered group of seamen posted in two rows at the quarterdeck when a visiting dignitary boards or leaves the ship, historically to help him aboard, presently as a ceremonial guard of honour, in a ceremony known as tending the Side. Side boys are instructed by the...
s to which the visitor is entitled.


Name of the ship

The ship's name is traditionally engraved or cast onto the surface the bell, often with the year the ship was launched as well. Occasionally (especially on more modern ships) the bell will also carry the name of the shipyard
Shipyard
Shipyards and dockyards are places which repair and build ships. These can be yachts, military vessels, cruise liners or other cargo or passenger ships. Dockyards are sometimes more associated with maintenance and basing activities than shipyards, which are sometimes associated more with initial...
that built the ship. If a ship's name is changed, maritime tradition is that the original bell carrying the original name will remain with the vessel.
A ship's bell is a prized possession when a ship is broken up, and often provides the only positive means of identification in the case of a shipwreck
Shipwreck
A shipwreck is what remains of a ship that has wrecked, either sunk or beached. Whatever the cause, a sunken ship or a wrecked ship is a physical example of the event: this explains why the two concepts are often overlapping in English....
.

According to seafaring legend, the ship's cooks
Cook
Cook is a family name of English origin.There are several figures named Cook:- A :*Aaron Cook several people*A. J. Cook , actress*A. J...
and boatswain's mates
Boatswain
A boatswain , bo's'n, bos'n, or bosun is an unlicensed member of the deck department of a merchant ship. The boatswain supervises the other unlicensed members of the ship's deck department, and typically is not a watchstander, except on vessels with small crews...
had a duty arrangement to give the cooks more sleep. The boatswain's mates, who worked 24 hours a day on watches
Watchstanding
Watchstanding, or watchkeeping, in nautical terms concerns the division of qualified personnel to operate a ship continuously around the clock. On a typical sea going vessel, be it naval or merchant, personnel keep watch on the bridge and over the running machinery...
, would build the fire in the stove
Kitchen stove
A kitchen stove, cooking stove, cookstove, or cooker is a kitchen appliance designed for the purpose of cooking food. Kitchen stoves rely on the application of direct heat for the cooking process and may also contain an oven, used for baking.In the industrialized world, as stoves replaced open...
, so the cook could get up a little while later and the fire would be already going so he could begin preparing breakfast
Breakfast
Breakfast is the first meal taken after rising from a night's sleep, most often eaten in the early morning before undertaking the day's work...
. In return, between meals, the cooks would shine the bell, which was traditionally the boatswain's mates' responsibility.

It is a naval tradition to baptize children using the ship's bell as a baptismal font
Baptismal font
A baptismal font is an article of church furniture or a fixture used for the baptism of children and adults.-Aspersion and affusion fonts:...
and to engrave the names of the children on the naval bell afterwards. Tracking down and searching for an individual's name on a specific bell from a ship may be a difficult and time-consuming task. Christening information from the bells held by the Canadian Forces
Canadian Forces
The Canadian Forces , officially the Canadian Armed Forces , are the unified armed forces of Canada, as constituted by the National Defence Act, which states: "The Canadian Forces are the armed forces of Her Majesty raised by Canada and consist of one Service called the Canadian Armed Forces."...
Base Esquimalt Museum has been entered into a searchable data archive that is accessible to any interested web site visitors.