A Shepard tone, named after Roger Shepard
Roger Shepard
Roger Newland Shepard is a cognitive scientist and author of Toward a Universal Law of Generalization for Psychological Science. He is seen as a father of research on spatial relations....
, is a sound consisting of a superposition of sine waves separated by octave
Octave
In music, an octave is the interval between one musical pitch and another with half or double its frequency. The octave relationship is a natural phenomenon that has been referred to as the "basic miracle of music", the use of which is "common in most musical systems"...
s. When played with the base pitch
Pitch (music)
Pitch is an auditory perceptual property that allows the ordering of sounds on a frequency-related scale.Pitches are compared as "higher" and "lower" in the sense associated with musical melodies,...
of the tone moving upward or downward, it is referred to as the Shepard scale. This creates the auditory illusion
Auditory illusion
An auditory illusion is an illusion of hearing, the aural equivalent of an optical illusion: the listener hears either sounds which are not present in the stimulus, or "impossible" sounds...
of a tone that continually ascends or descends in pitch, yet which ultimately seems to get no higher or lower. It has been described as a "sonic barber's pole
Barber's pole
A barber's pole is a type of sign used by barbers to signify the place or shop where they perform their craft. The trade sign is, by a tradition dating back to the Middle Ages, a staff or pole with a helix of colored stripes...
".


Construction of a Shepard scale

The acoustical illusion can be constructed by creating a series of overlapping ascending or descending scales. Similar to the Penrose stairs
Penrose stairs
The Penrose stairs or Penrose steps, also dubbed the impossible staircase, is an impossible object created by Lionel Penrose and his son Roger Penrose...
optical illusion
Optical illusion
An optical illusion is characterized by visually perceived images that differ from objective reality. The information gathered by the eye is processed in the brain to give a perception that does not tally with a physical measurement of the stimulus source...
(as in M. C. Escher
M. C. Escher
Maurits Cornelis Escher , usually referred to as M. C. Escher , was a Dutch graphic artist. He is known for his often mathematically inspired woodcuts, lithographs, and mezzotints...
's lithograph Ascending and Descending
Ascending and Descending
Ascending and Descending is a lithograph print by the Dutch artist M. C. Escher which was first printed in March 1960.The original print measures 14" x 11 1/4”. The lithograph depicts a large building roofed by a never-ending staircase. Two lines of identically dressed men appear on the staircase,...
) or a barber's pole
Barber's pole
A barber's pole is a type of sign used by barbers to signify the place or shop where they perform their craft. The trade sign is, by a tradition dating back to the Middle Ages, a staff or pole with a helix of colored stripes...
, the basic concept is shown in figure 1.

Each square in the figure indicates a tone, any set of squares in vertical alignment together making one Shepard tone. The color of each square indicates the loudness
Loudness
Loudness is the quality of a sound that is primarily a psychological correlate of physical strength . More formally, it is defined as "that attribute of auditory sensation in terms of which sounds can be ordered on a scale extending from quiet to loud."Loudness, a subjective measure, is often...
of the note, with purple being the quietest and green the loudest. Overlapping notes that play at the same time are exactly one octave apart, and each scale fades in and fades out so that hearing the beginning or end of any given scale is impossible. As a conceptual example of an ascending Shepard scale, the first tone could be an almost inaudible C(4) (middle C
Middle C
C or Do is the first note of the fixed-Do solfège scale. Its enharmonic is B.-Middle C:Middle C is designated C4 in scientific pitch notation because of the note's position as the fourth C key on a standard 88-key piano keyboard...
) and a loud C(5) (an octave higher). The next would be a slightly louder C#(4) and a slightly quieter C#(5); the next would be a still louder D(4) and a still quieter D(5). The two frequencies would be equally loud at the middle of the octave (F#), and the eleventh tone would be a loud B(4) and an almost inaudible B(5) with the addition of an almost inaudible B(3). The twelfth tone would then be the same as the first, and the cycle could continue indefinitely. (In other words, each tone consists of ten sine waves with frequencies separated by octaves; the intensity of each is a gaussian function of its separation in semitone
Semitone
A semitone, also called a half step or a half tone, is the smallest musical interval commonly used in Western tonal music, and it is considered the most dissonant when sounded harmonically....
s from a peak frequency, which in the above example would be B(4).) 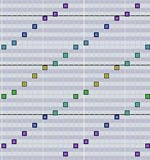 The scale as described, with discrete steps between each tone, is known as the discrete Shepard scale. The illusion is more convincing if there is a short time between successive notes (staccato
Staccato
Staccato is a form of musical articulation. In modern notation it signifies a note of shortened duration and separated from the note that may follow by silence...
or marcato
Marcato
Marcato is a musical instruction indicating a note, chord, or passage is to be played louder or more forcefully than surrounding music. The instruction may involve the word marcato itself written above or below the staff or it may take the form of an accent mark, ^ , an open vertical wedge...
instead of legato
Legato
In musical notation the Italian word legato indicates that musical notes are played or sung smoothly and connected. That is, in transitioning from note to note, there should be no intervening silence...
or portamento
Portamento
Portamento is a musical term originated from the Italian expression "portamento della voce" , denoting from the beginning of the 17th century a vocal slide between two pitches and its emulation by members of the violin family and certain wind instruments, and is sometimes used...
).
As a more concrete example, consider a brass trio consisting of a trumpet, a horn, and a tuba. They all start to play a repeating C scale (C–D–E–F–G–A–B–C) in their respective ranges, i.e. they all start playing Cs, but their notes are all in different octaves. When they reach the G of the scale, the trumpet drops down an octave, but the horn and tuba continue climbing. They're all still playing the same pitch class, but at different octaves. When they reach the B, the horn similarly drops down an octave, but the trumpet and tuba continue to climb, and when they get to what would be the second D of the scale, the tuba drops down to repeat the last seven notes of the scale. So no instrument ever exceeds an octave range, and essentially keeps playing exactly the same seven notes over and over again. But because two of the instruments are always "covering" the one that drops down an octave, it seems that the scale never stops rising.

Jean-Claude Risset
Jean-Claude Risset
Jean-Claude Risset is a French composer, best known for his pioneering contributions to computer music. He is a former student of André Jolivet and former co-worker of Max Mathews at Bell Labs....
subsequently created a version of the scale where the steps between each tone are continuous, and it is appropriately called the continuous Risset scale or Shepard–Risset glissando. When done correctly, the tone appears to rise (or descend) continuously in pitch, yet return to its starting note. Risset has also created a similar effect with rhythm
Rhythm
Rhythm may be generally defined as a "movement marked by the regulated succession of strong and weak elements, or of opposite or different conditions." This general meaning of regular recurrence or pattern in time may be applied to a wide variety of cyclical natural phenomena having a periodicity or...
in which tempo seems to increase or decrease endlessly.