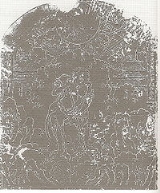 Of the multitude styles of kung fu and wushu
Wushu (sport)
The sport of wushu is both an exhibition and a full-contact sport derived from traditional Chinese martial arts. It was created in the People's Republic of China after 1949, in an attempt to nationalize the practice of traditional Chinese martial arts...
, only some are actually related to Shaolin. Aside from a few very well known systems, such as Xiao Hong Quan, the Da Hong Quan, Yin Shou Gun, Damo Sword, etc.,, after the loss of records during the 20th Century Cultural Revolution it would be almost impossible for a particular style to conclusively establish a connection to the Temple.
Huang Zongxi
Huang Zongxi
Huang Zongxi , courtesy name Taichong , was the name of a Chinese naturalist, political theorist, philosopher, and soldier during the latter part of the Ming dynasty into the early part the Qing.-Biography:...
described martial arts in terms of Shaolin or "external" arts versus Wudang or internal
Neijia
Nèijiā is a term in Chinese martial arts, grouping those styles that practice nèijìng , usually translated as internal martial arts, occupied with spiritual, mental or qi-related aspects, as opposed to an "external" approach focused on physiological aspects...
arts in 1669.