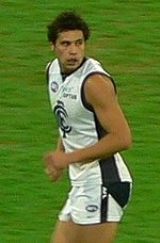 Encyclopedia
Setanta "Carlos" Ó hAilpín (born in Sydney
Sydney
Sydney is the most populous city in Australia and the state capital of New South Wales. Sydney is located on Australia's south-east coast of the Tasman Sea. As of June 2010, the greater metropolitan area had an approximate population of 4.6 million people...
, Australia
Australia
Australia , officially the Commonwealth of Australia, is a country in the Southern Hemisphere comprising the mainland of the Australian continent, the island of Tasmania, and numerous smaller islands in the Indian and Pacific Oceans. It is the world's sixth-largest country by total area...
on 18 March 1983) is an Australian-Irish sportsman. He was a hurler
Hurling
Hurling is an outdoor team game of ancient Gaelic origin, administered by the Gaelic Athletic Association, and played with sticks called hurleys and a ball called a sliotar. Hurling is the national game of Ireland. The game has prehistoric origins, has been played for at least 3,000 years, and...
with the Cork senior team before becoming a professional Australian Rules football
Australian rules football
Australian rules football, officially known as Australian football, also called football, Aussie rules or footy is a sport played between two teams of 22 players on either...
er. He is of mixed Irish
Irish people
The Irish people are an ethnic group who originate in Ireland, an island in northwestern Europe. Ireland has been populated for around 9,000 years , with the Irish people's earliest ancestors recorded having legends of being descended from groups such as the Nemedians, Fomorians, Fir Bolg, Tuatha...
and Rotuman
Rotuman people
The Rotuman people are the indigenous inhabitants of Rotuma, a small island group forming part of the Republic of Fiji. The island itself is a cultural melting pot at the crossroads of the Micronesian, Melanesian and Polynesian divisions of the Pacific Ocean, and due to the seafaring nature of...
background. His brothers Seán Óg
Seán Óg Ó hAilpín
Seán Óg Ó hAilpín is an iconic Irish-Fijian sportsperson. A former dual player, he currently plays hurling with his local club Na Piarsaigh and is a member of the Cork senior inter-county team. Ó hAilpín captained Cork to the All-Ireland title in 2005...
, Teu
Teu Ó hAilpín
Teu Ó hAilpín is an Irish sportsperson playing for Na Piarsaigh GAA. Born in Cork, he was a Gaelic Athletic Association player who played for the Éire Óg club in Ennis and Na Piarsaigh in Cork. He is the brother of Cork senior hurling players Seán Óg Ó hAilpín and Aisake and older brother of...
and Aisake
Aisake Ó hAilpín
Aisake Faga Ó hAilpín is an Irish Australian sportsperson. He grew up in Cork and played hurling and Gaelic football with Na Piarsaigh. Ó hAilpín played Australian rules football with the Carlton Football Club between 2005 and 2008...
are also noted sportsmen.

He joined his elder brother Seán Óg
Seán Óg Ó hAilpín
Seán Óg Ó hAilpín is an iconic Irish-Fijian sportsperson. A former dual player, he currently plays hurling with his local club Na Piarsaigh and is a member of the Cork senior inter-county team. Ó hAilpín captained Cork to the All-Ireland title in 2005...
on the Cork team for the All-Ireland Senior Hurling Championship 2003
All-Ireland Senior Hurling Championship 2003
The All-Ireland Senior Hurling Championship 2003 was the 117th since its establishment in 1887. The first matches of the season were played in May 2003, and the championship ended on 14 September 2003...
, which lost the final to Kilkenny
Kilkenny GAA
The Kilkenny County Board of the Gaelic Athletic Association is one of the 32 county boards of the GAA in Ireland and is responsible for Gaelic Games in County Kilkenny. The county board has its head office and main grounds at Nowlan Park and is also responsible for Kilkenny inter-county teams...
in September. His contribution to the campaign earned him an All-Star award
GAA All Stars Awards
The All Stars Awards, currently sponsored by Vodafone, are given annually since 1971 by the Gaelic Athletic Association to the best player in each of the fifteen positions in Gaelic football and Hurling in Ireland. Additionally, one player in each code is selected as the player of the year...
and the Young Hurler of the Year award.

Ó hAilpín was placed on Carlton's senior list in 2006. After playing largely in the forward line for the first years of his development, he was shifted to half-back
Half-back line
In the sport of Australian rules football, the half-back line refers to the positions of the 3 players on the field that occupy the centre-half back and left and right half-back flank positions....
in early 2006. He gained regular senior selection late in the season, going on to play in the final ten games of the season.

Setanta became a crowd favourite amongst Carlton fans. His nickname "Carlos" is derived from the similarity between Setanta and Santana, the surname of Mexican/American guitarist Carlos Santana
Carlos Santana
Carlos Augusto Alves Santana is a Mexican rock guitarist. Santana became famous in the late 1960s and early 1970s with his band, Santana, which pioneered rock, salsa and jazz fusion...
. "Setanta" was the birth-name of Cúchulainn
Cúchulainn
Cú Chulainn or Cúchulainn , and sometimes known in English as Cuhullin , is an Irish mythological hero who appears in the stories of the Ulster Cycle, as well as in Scottish and Manx folklore...
, hero of the Ulster Cycle
Ulster Cycle
The Ulster Cycle , formerly known as the Red Branch Cycle, one of the four great cycles of Irish mythology, is a body of medieval Irish heroic legends and sagas of the traditional heroes of the Ulaid in what is now eastern Ulster and northern Leinster, particularly counties Armagh, Down and...
of Irish mythology
Irish mythology
The mythology of pre-Christian Ireland did not entirely survive the conversion to Christianity, but much of it was preserved, shorn of its religious meanings, in medieval Irish literature, which represents the most extensive and best preserved of all the branch and the Historical Cycle. There are...
.

On 6 February 2009, Ó hAilpín was suspended indefinitely by the Carlton Football Club for his involvement in a violent altercation with teammate Cameron Cloke
Cameron Cloke
Cameron Cloke is former Australian rules footballer. He is the son of former Richmond and Collingwood champion David Cloke.-AFL career:...
in an internal trial match. His actions were scrutinised by the AFL's match review panel on 9 February, and he faced being forced into anger management counselling. On 9 February 2009, Ó hAilpín was suspended for four weeks by the AFL tribunal after being charged with a level 4 offence for striking Cloke and a level 2 offence for kicking him. He came close to returning to Ireland.

Before the game that would have seen Ó hAilpín play his first AFL final, the Irishman was dropped by the Carlton selection committee before the Elimination final against Brisbane.

Following the departure of Fevola in the 2009/10 offseason, Ó hAilpín became the regular full forward/half forward in the Carlton lineup. He began to average over two goals per game, and on May 2, he booted a career high five goals, becoming the first Irish player to do so.

During the AFL Trade Week at the end of 2010, Ó hAilpín was linked with a move to Western Bulldogs
Western Bulldogs
The Western Bulldogs are an Australian rules football club which plays in the Australian Football League . The club is based at the Whitten Oval in West Footscray, an inner-western suburb of Melbourne...
after apparently being unhappy at being dropped from the Blues' side midway through the season and never getting back in. He played eight matches in 2011, including two finals, but was delisted at the end of the season; Carlton indicated that it would have preferred to have kept him on the list, but was forced to delist one more of its out-of-contract players due to league requirements that clubs make three changes to their primary list each season.

In the following offseason, Ó hAilpín was recruited to the inaugural AFL playing list of the Greater Western Sydney Football Club, the club using its fifth round selection in the 2011 AFL National Draft
2011 AFL Draft
The 2011 AFL Draft consists of four opportunities for player acquisitions during the 2011/12 Australian Football League off-season.They are:*Trade Week; which will be held between...
(No. 79 overall) to recruit him.