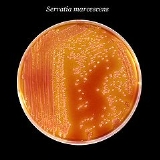 Encyclopedia
Serratia is a genus
Genus
In biology, a genus is a low-level taxonomic rank used in the biological classification of living and fossil organisms, which is an example of definition by genus and differentia...
of Gram-negative
Gram-negative
Gram-negative bacteria are bacteria that do not retain crystal violet dye in the Gram staining protocol. In a Gram stain test, a counterstain is added after the crystal violet, coloring all Gram-negative bacteria with a red or pink color...
, facultatively anaerobic
Facultative anaerobic organism
A facultative anaerobic organism is an organism, usually a bacterium, that makes ATP by aerobic respiration if oxygen is present but is also capable of switching to fermentation...
, rod-shaped
Bacillus
Bacillus is a genus of Gram-positive, rod-shaped bacteria and a member of the division Firmicutes. Bacillus species can be obligate aerobes or facultative anaerobes, and test positive for the enzyme catalase. Ubiquitous in nature, Bacillus includes both free-living and pathogenic species...
bacteria
Bacteria
Bacteria are a large domain of prokaryotic microorganisms. Typically a few micrometres in length, bacteria have a wide range of shapes, ranging from spheres to rods and spirals...
of the Enterobacteriaceae
Enterobacteriaceae
The Enterobacteriaceae is a large family of bacteria that includes many of the more familiar pathogens, such as Salmonella, Escherichia coli, Yersinia pestis, Klebsiella and Shigella. This family is the only representative in the order Enterobacteriales of the class Gammaproteobacteria in the...
family. The most common species in the genus, S. marcescens
Serratia marcescens
Serratia marcescens is a species of Gram-negative, rod-shaped bacterium in the family Enterobacteriaceae. A human pathogen, S. marcescens is involved in nosocomial infections, particularly catheter-associated bacteremia, urinary tract infections and wound infections, and is responsible for 1.4% of...
, is normally the only pathogen
Pathogen
A pathogen gignomai "I give birth to") or infectious agent — colloquially, a germ — is a microbe or microorganism such as a virus, bacterium, prion, or fungus that causes disease in its animal or plant host...
and usually causes nosocomial infection
Nosocomial infection
A nosocomial infection , also known as a hospital-acquired infection or HAI, is an infection whose development is favoured by a hospital environment, such as one acquired by a patient during a hospital visit or one developing among hospital staff...
s. However, rare strains of S. plymuthica, S. liquefaciens, S. rubidaea, and S. odoriferae have caused diseases through infection. Members of this genus produce characteristic red pigment
Pigment
A pigment is a material that changes the color of reflected or transmitted light as the result of wavelength-selective absorption. This physical process differs from fluorescence, phosphorescence, and other forms of luminescence, in which a material emits light.Many materials selectively absorb...
, prodigiosin
Prodigiosin
Prodigiosin is the red pigment produced by many strains of the bacterium Serratia marcescens, other Gram negative gamma proteobacteria such as Vibrio psychroerythrus and Hahella chejuensis It is in a family of compounds termed prodiginines which are produced in some Gram negative gamma...
, and can be distinguished from other members of the family Enterobacteriaceae by its unique production of three enzymes: DNase, lipase, and gelatinase.

The genus is named after Serafino Serrati, an Italian physicist.

In the hospital, Serratia species tend to colonize the respiratory and urinary tracts, rather than the gastrointestinal tract, in adults.

Serratia infection is responsible for about 2% of nosocomial infections of the bloodstream, lower respiratory tract, urinary tract, surgical wounds, and skin and soft tissues in adult patients. Outbreaks of S. marcescens meningitis, wound infections, and arthritis have occurred in pediatric wards.

Serratia infection has caused endocarditis and osteomyelitis in people addicted to heroin.

Cases of Serratia arthritis have been reported in outpatients receiving intra-articular injections.

S. marcescens was once thought to be a non-pathogenic bacteria. Because of the red pigment it produces, it was widely used to trace bacterial transmission and to study settling and drifting of bacteria in air currents. In 1950 the US Navy conducted a secret experiment called “Operation Seaspray” to study wind currents that might carry biological weapons. They filled balloons with S. marcescens and burst them over San Francisco. Shortly thereafter, doctors in the area noted a drastic increase in pneumonia and urinary tract infections.
The source of this article is wikipedia, the free encyclopedia.  The text of this article is licensed under the GFDL.