The American Civil War
American Civil War
The American Civil War was a civil war fought in the United States of America. In response to the election of Abraham Lincoln as President of the United States, 11 southern slave states declared their secession from the United States and formed the Confederate States of America ; the other 25...
(1861–1865) policy yielded the cessation of legal slavery
History of slavery in the United States
Slavery in the United States was a form of slave labor which existed as a legal institution in North America for more than a century before the founding of the United States in 1776, and continued mostly in the South until the passage of the Thirteenth Amendment to the United States Constitution in...
in the U.S., however not the intent of a different class of citizen. Before the end of the war, the Morrill Land-Grant Colleges Act
Morrill Land-Grant Colleges Act
The Morrill Land-Grant Acts are United States statutes that allowed for the creation of land-grant colleges, including the Morrill Act of 1862 and the Morrill Act of 1890 -Passage of original bill:...
(Morrill Act of 1862) was passed to provide for federal funding of higher education by each state with the details left to the state legislatures. Following the war, the Fourteenth Amendment
Fourteenth Amendment to the United States Constitution
The Fourteenth Amendment to the United States Constitution was adopted on July 9, 1868, as one of the Reconstruction Amendments.Its Citizenship Clause provides a broad definition of citizenship that overruled the Dred Scott v...
to the United States Constitution guaranteed equal protection under the law to all citizens, and Congress established the Freedmen's Bureau to assist the integration of former slaves into Southern society. After the end of Reconstruction in 1877, former slave-holding states enacted various laws to undermine the equal treatment of African Americans, although the 14th Amendment as well as federal Civil Rights laws enacted during reconstruction were meant to guarantee it. However Southern states contended that the requirement of equality could be met in a manner that kept the races separate. Furthermore, the state and federal courts tended to reject the pleas by African American's that their 14th amendment rights were violated, arguing that the 14th amendment applied only to federal, not state, citizenship. This rejection is evident in the Slaughter-House Cases and Civil Rights Cases
Civil Rights Cases
The Civil Rights Cases, 109 U.S. 3 , were a group of five similar cases consolidated into one issue for the United States Supreme Court to review...
.

After the end of Reconstruction, the federal government adopted a general policy of leaving racial segregation up to the individual states. One example of this policy was the second Morrill Act (Morrill Act of 1890), which implicitly accepted the legal concept of separate but equal for the 17 states which had institutionalized segregation.

Provided, That no money shall be paid out under this act to any State or Territory for the support and maintenance of a college where a distinction of race or color is made in the admission of students, but the establishment and maintenance of such colleges separately for white and colored students shall be held to be a compliance with the provisions of this act if the funds received in such State or Territory be equitably divided as hereinafter set forth. 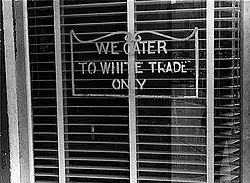 Although the Constitutional doctrine required equality, the facilities and social services offered to African-Americans were of lower quality than those offered to whites; for example, many African American schools received less public funding per student than nearby white schools. In Texas, the state established a state-funded law school for whites without any law school for blacks.

Many companies disobeyed the Jim Crow laws
Jim Crow laws
The Jim Crow laws were state and local laws in the United States enacted between 1876 and 1965. They mandated de jure racial segregation in all public facilities, with a supposedly "separate but equal" status for black Americans...
for years. According to Jennifer Roback, the market automatically punishes companies that discriminate: they lose customers and get additional expenses.

The repeal of such restrictive laws, generally known as Jim Crow laws
Jim Crow laws
The Jim Crow laws were state and local laws in the United States enacted between 1876 and 1965. They mandated de jure racial segregation in all public facilities, with a supposedly "separate but equal" status for black Americans...
, was a key focus of the civil rights movement prior to 1954. In Sweatt v. Painter
Sweatt v. Painter
Sweatt v. Painter, , was a U.S. Supreme Court case that successfully proved lack of equality, in favor of a black applicant, the "separate but equal" doctrine of racial segregation established by the 1896 case Plessy v. Ferguson. The case was also influential in the landmark case of Brown v...
, the Supreme Court addressed a legal challenge to the doctrine by a student seeking admission to a state supported law school in Texas. Because Texas did not have a law school for blacks, the lower court delayed the case until Texas could create one. However, the Supreme Court ordered that the student be admitted to the white law school on the grounds that the separate school failed to qualify as being "equal," both because of quantitative differences in facilities and intangible factors, such as its isolation from most of the future lawyers with whom its graduates would interact. The court held that, when considering graduate education, intangibles must be considered as part of "substantive equality." The same day, the Supreme Court in McLaurin v. Oklahoma State Regents
McLaurin v. Oklahoma State Regents
McLaurin v. Oklahoma State Regents, 339 U.S. 637 , was a United States Supreme Court case that reversed a lower court decision upholding the efforts of the state-supported University of Oklahoma to adhere to the state law requiring African-Americans to be provided graduate or professional education...
ruled that Oklahoma segregation laws which required a graduate student working on a Doctor of Education degree to sit in the hallway outside the classroom door did not qualify as 'separate but equal.' These cases ended 'separate but equal' in graduate and professional education.

In Brown v. Board of Education
Brown v. Board of Education
Brown v. Board of Education of Topeka, 347 U.S. 483 , was a landmark decision of the United States Supreme Court that declared state laws establishing separate public schools for black and white students unconstitutional. The decision overturned the Plessy v. Ferguson decision of 1896 which...
, 347 U.S. 483 (1954), attorneys for the NAACP referred to the phrase "equal but separate" used in Plessy v. Ferguson
Plessy v. Ferguson
Plessy v. Ferguson, 163 U.S. 537 , is a landmark United States Supreme Court decision in the jurisprudence of the United States, upholding the constitutionality of state laws requiring racial segregation in private businesses , under the doctrine of "separate but equal".The decision was handed...
as a custom de jure
De jure
De jure is an expression that means "concerning law", as contrasted with de facto, which means "concerning fact".De jure = 'Legally', De facto = 'In fact'....
racial segregation
Racial segregation
Racial segregation is the separation of humans into racial groups in daily life. It may apply to activities such as eating in a restaurant, drinking from a water fountain, using a public toilet, attending school, going to the movies, or in the rental or purchase of a home...
enacted into law. The NAACP, led by the soon-to-be first black Supreme Court Justice Thurgood Marshall
Thurgood Marshall
Thurgood Marshall was an Associate Justice of the United States Supreme Court, serving from October 1967 until October 1991...
, was successful in challenging the constitutional
Constitutionality
Constitutionality is the condition of acting in accordance with an applicable constitution. Acts that are not in accordance with the rules laid down in the constitution are deemed to be ultra vires.-See also:*ultra vires*Company law*Constitutional law...
viability of the separate but equal doctrine, and the court voted to overturn sixty years of law that had developed under Plessy. The Supreme Court outlawed segregated public education facilities for blacks and whites at the state level. The companion case of Bolling v. Sharpe
Bolling v. Sharpe
Bolling v. Sharpe, 347 U.S. 497 , is a landmark United States Supreme Court case which deals with civil rights, specifically, segregation in the District of Columbia's public schools. Originally argued on December 10–11, 1952, a year before Brown v. Board of Education, 347 U.S...
, 347 U.S. 497 outlawed such practices at the Federal level in the District of Columbia. The Brown court held:


We conclude that, in the field of public education, the doctrine of "separate but equal" has no place. Separate educational facilities are inherently unequal. Therefore, we hold that the plaintiffs and others similarly situated for whom the actions have been brought are, by reason of the segregation complained of, deprived of the equal protection of the laws guaranteed by the Fourteenth Amendment.

Even though the Constitutionality of separate but equal education had been overturned, it would be almost ten more years before the Civil Rights Act of 1964
Civil Rights Act of 1964
The Civil Rights Act of 1964 was a landmark piece of legislation in the United States that outlawed major forms of discrimination against African Americans and women, including racial segregation...
would extinguish the application of separate but equal in all areas of public accommodations such as transportation and hotels. Additionally, in 1967 under Loving v. Virginia
Loving v. Virginia
Loving v. Virginia, , was a landmark civil rights case in which the United States Supreme Court, in a unanimous decision, declared Virginia's anti-miscegenation statute, the "Racial Integrity Act of 1924", unconstitutional, thereby overturning Pace v...
, the United States Supreme Court declared Virginia
Virginia
The Commonwealth of Virginia , is a U.S. state on the Atlantic Coast of the Southern United States. Virginia is nicknamed the "Old Dominion" and sometimes the "Mother of Presidents" after the eight U.S. presidents born there...
's anti-miscegenation statute, the "Racial Integrity Act of 1924
Racial Integrity Act of 1924
On March 20, 1924 the Virginia General Assembly passed two laws that had arisen out of contemporary concerns about eugenics and race: SB 219, entitled "The Racial Integrity Act" and SB 281, "An ACT to provide for the sexual sterilization of inmates of State institutions in certain cases",...
", unconstitutional, thereby ending all race-based legal restrictions on marriage
Marriage
Marriage is a social union or legal contract between people that creates kinship. It is an institution in which interpersonal relationships, usually intimate and sexual, are acknowledged in a variety of ways, depending on the culture or subculture in which it is found...
("anti-miscegenation laws
Anti-miscegenation laws
Anti-miscegenation laws, also known as miscegenation laws, were laws that enforced racial segregation at the level of marriage and intimate relationships by criminalizing interracial marriage and sometimes also sex between members of different races...
") in the United States. Although federal legislation prohibits racial discrimination in college admissions, the HBCUs continue to teach student bodies that are 75% to 90% African American. In 1975, Jake Ayers Sr. filed a lawsuit against Mississippi
Mississippi
Mississippi is a U.S. state located in the Southern United States. Jackson is the state capital and largest city. The name of the state derives from the Mississippi River, which flows along its western boundary, whose name comes from the Ojibwe word misi-ziibi...
for giving more financial support to its predominantly white public colleges. The state settled the lawsuit in 2002 and agreed to direct $503 million to three historically black colleges, collectively, over 17 years.