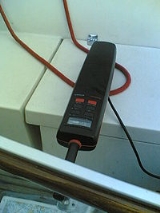 Encyclopedia
Self-steering gear is equipment used on ships and boats to maintain a chosen course without constant human action. It is also known by several other terms, such as autopilot
Autopilot
An autopilot is a mechanical, electrical, or hydraulic system used to guide a vehicle without assistance from a human being. An autopilot can refer specifically to aircraft, self-steering gear for boats, or auto guidance of space craft and missiles...
(borrowed from aircraft and considered incorrect by some) and autohelm (technically a Raymarine trademark, but often used generically). Several forms of self-steering gear exist, divided into two categories: electronic and mechanical. 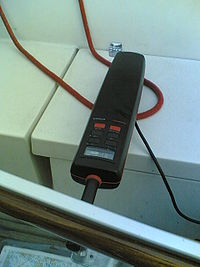 Electronic self-steering is controlled by electronics operating according to one or more input sensors, invariably at least a magnetic compass and sometimes wind direction or GPS
Global Positioning System
The Global Positioning System is a space-based global navigation satellite system that provides location and time information in all weather, anywhere on or near the Earth, where there is an unobstructed line of sight to four or more GPS satellites...
position versus a chosen waypoint. The electronics module calculates the required steering movement and a drive mechanism (usually electrical, though possibly hydraulic in larger systems) causes the rudder
Rudder
A rudder is a device used to steer a ship, boat, submarine, hovercraft, aircraft or other conveyance that moves through a medium . On an aircraft the rudder is used primarily to counter adverse yaw and p-factor and is not the primary control used to turn the airplane...
to move accordingly.

There are several possibilities for the interface between the drive mechanism and the conventional steering system. On yachts, the three most common systems are:
Depending on the sophistication of the control unit (e.g. tiller pilot, steering wheel attached Chartplotter
Chartplotter
A Chartplotter is a device used in marine navigation that integrates GPS data with an electronic navigational chart . The chartplotter displays the ENC along with the position, heading and speed of the ship, and may display additional information from radar, automatic information systems or other...
, ....), electronic self-steering gear can be programmed to hold a certain compass course, to maintain a certain angle to the wind (so that sailing boats need not change their sail trim), to steer towards a certain position, or any other function which can reasonably be defined. However, the amount of power required by electrical actuators, especially if constantly in action because of sea and weather conditions, is a serious consideration. Long-distance cruisers, which have no external source of electricity and often do not run their engines for propulsion, typically have relatively strict power budgets and do not use electrical steering for any length of time. As the electronic autopilot systems require electricity to operate, many vessels also make use of PV solar panels
Photovoltaics
Photovoltaics is a method of generating electrical power by converting solar radiation into direct current electricity using semiconductors that exhibit the photovoltaic effect. Photovoltaic power generation employs solar panels composed of a number of solar cells containing a photovoltaic material...
or small wind turbine
Wind turbine
A wind turbine is a device that converts kinetic energy from the wind into mechanical energy. If the mechanical energy is used to produce electricity, the device may be called a wind generator or wind charger. If the mechanical energy is used to drive machinery, such as for grinding grain or...
s on the boat. This eliminates extra pollution
Pollution
Pollution is the introduction of contaminants into a natural environment that causes instability, disorder, harm or discomfort to the ecosystem i.e. physical systems or living organisms. Pollution can take the form of chemical substances or energy, such as noise, heat or light...
and cuts costs. 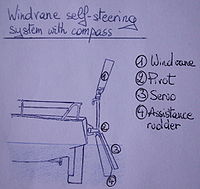 Mechanical or "wind vane" self-steering started out as a way to keep model sail boats on course. The first time that it was used to cross an ocean was on a motorboat. The most widespread form of self steering, the servo pendulum was introduced to cope with the power requried to operate a larger rudder and was a successor to the servo trim tab principle. (introduced by Herbert "Blondie" Hasler
Herbert Hasler
Lieutenant-Colonel Herbert George "Blondie" Hasler, DSO, OBE was a distinguished Royal Marines officer in World War II, responsible for many of the concepts which ultimately led to the post-war formation of the Special Boat Service...
) Both methods use the power derived from the motion of the boat through the water to hold a constant angle to the wind with the use of the boat's main rudder. Despite the popularity of servo systems one manufacturer has successfully developed a system that uses an auxiliary rudder direct from the windvane; the picture of the windvane shown uses this principle with the previously used large fabric vane on a vertical axis.(the use of wind vanes with a horrizontal axis is now predominant used) Offshore, the wind direction is relatively stable, so over a number of hours this results in a reasonably constant compass course, and also means that the sails need not be adjusted. Mechanical self-steering can be complicated to set up, so it is typically used only for long-distance sailing where the same course is maintained for long periods. Many boats fitted with mechanical self-steering also carry an electrical autohelm for use over shorter periods where it is not worth setting up the wind vane.

Mechanical self-steering gear is made by a number of manufacturers, but most share the same principle. A narrow upright board, the wind vane, is mounted on a horrizontal axis carrier that is itself rotated so that with the boat traveling in the desired direction the vane is vertical and edge-on to the wind. The wind vane is held upright by a small weight below the pivot, but if the boat turns so that the board is no longer edge-on to the wind it will be blown over to one side as the extra surface area is revealed. This movement is transmitted by a series of linkages to a blade (or oar) in the water. In the simplest devices this blade acts directly as a secondary rudder, and steers the boat back onto the proper course however most designs of windvane self steering find that the force provided by the wind vane alone is not sufficient to make this system work and hence a so-called servo pendulum system is used.

As the blade described above turns, the pressure of water moving past it causes it to swing out sideways on the end of a pivoted rod. The length of this rod and the speed of the water means that a considerable force is available at the top end of it, sufficient to change the course of much larger boats. This is achieved either by a connection to the main wheel or tiller (typically involving a complex arrangement of lines and blocks rigged around the stern of the boat) or by fixing the main steering in place and equipping the self-steering gear with its own rudder. Once the boat has moved back to its correct course, the wind vane stands up again as it is no longer blown over by the wind.

To make wind vane self steering work well it is essential to have the vessel's sails balanced with little load on the rudder before any attempt is made to engage the self steering. With the sails are trimmed correctly wind vane self-steering is very effective. Some experimentation and judgement is usually needed, however, to determine the proper settings for a given vessel and steering mechanism. In addition, wind vanes perform poorly in very light winds, as the forces needed to operate them are much reduced. The same applies when travelling downwind, as the apparent wind speed is reduced by the speed of the boat.

As well as their requirement for power, many long-distance cruisers observe that electronic self-steering machinery is complex and unlikely to be repairable without spare parts in remote areas. By contrast, the often agricultural-looking mechanism of a wind vane gear offers at least the possibility of an improvised repair at sea, and can usually be rebuilt on land using non-specific parts (sometimes plumbing parts) by a local welder or machinist.

Another version of wind vane self steering on sail boats is known as the vertical axis vane and usually, because of the inferior power it has to its Servo Pendulum cousins it makes use of a trim tab hung off the rudder to control the course of the boat. The vane spins at right angles to the ground and can lock to the trim tab in any desired position, as the boat falls off the wind the vane will be turned by the wind and will take the trim tab with it which in turn causes the rudder to move in the opposite direction and thus corrects course. Generally self steering like this, with a trim tab can only be used on boats with transom (or aft hung double enders) rudders as the trim tab needs to be mounted directly to and aft of the rudder to produce the desired effect, and of course has to be controlled even as the rudder swings side to side. This is typically accomplished by use of a slotted bar in which the connection to the vane assembly can slide in as the rudder turns. These self steering systems are generally simpler and are thus easier to set and adjust course as they don't make use of lines controlling the rudder but control it more directly through solid linkages.

A popular source on contemporary windvane technology is The Windvane Self-Steering Handbook. One particularly valuable contribution of Morris's book is his coverage of the variety of alloys used in vane gear manufacturing. Morris admits to his practice of setting a kitchen timer for a half hour at a time and sleeping while the windvane steering device controls the helm, even in head winds of 25 to 35 knots. In a recent interview, he said he once narrowly missed being hit by a huge freighter while sleeping on his sail up the Red Sea. Morris points out, "An autopilot wouldn't have made any difference in this case. If I had been using an electronic autopilot, that freighter still would have been there. I made a choice to sail two-thirds of my circumnavigation single-handed, and I accepted the risks that came with that decision. I guess fate was on my side."

For quite a long time there was little development in the self steering systems that were available commercially.
Most new developments came in the form of self-build systems. Crucial roles were played by Walt Murray, an American who published his designs on his website.(This website is no longer in existence). and Dutchman Jan Alkema who developed a new windvane, the so called Up Side Down windvane (USD for short, commercially available from only one brand) and a new kind of servo pendulum system that could be fitted to boats with a transom hung rudder. For this last invention Jan Alkema was rewarded the John Hogg-Price from the AYRS ( Amateur Yacht Research Society) in 2005. Jan Alkema published a lot of his inventions on Walt Murray's website.