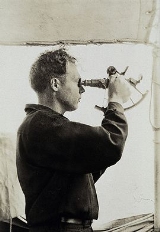 Overview
A second mate or second officer is a licensed member
Licensed mariner
A licensed mariner is a person who holds a license issued by one or more countries to hold senior positions aboard ships, boats, and similar vessels. The United States Coast Guard grants licenses to members of the United States Merchant Marine in five categories: deck officers, engineers, staff...
of the deck department
Deck department
The Deck Department is an organizational unit aboard naval and merchant ships. A Deck Officer is an officer serving in the deck department.-Merchant shipping:...
of a merchant ship. The second mate is the third in command (or on some ocean liners fourth) and a watchkeeping officer, customarily the ship's navigator
Navigator
A navigator is the person on board a ship or aircraft responsible for its navigation. The navigator's primary responsibility is to be aware of ship or aircraft position at all times. Responsibilities include planning the journey, advising the Captain or aircraft Commander of estimated timing to...
. Other duties vary, but the second mate is often the medical officer and in charge of maintaining distress signaling equipment
Global Maritime Distress Safety System
The Global Maritime Distress and Safety System is an internationally agreed-upon set of safety procedures, types of equipment, and communication protocols used to increase safety and make it easier to rescue distressed ships, boats and aircraft....
. On oil tanker
Oil tanker
An oil tanker, also known as a petroleum tanker, is a merchant ship designed for the bulk transport of oil. There are two basic types of oil tankers: the crude tanker and the product tanker. Crude tankers move large quantities of unrefined crude oil from its point of extraction to refineries...
s, the second mate usually assists the chief mate
Chief Mate
A Chief Mate or Chief Officer, usually also synonymous with the First Mate or First Officer , is a licensed member and head of the deck department of a merchant ship...
with the tank-cleaning operations.

The navigator role focuses on creating the ship's passage plan
Passage planning
Passage planning or voyage planning is a procedure to develop a complete description of a vessel's voyage from start to finish. The plan includes leaving the dock and harbor area, the en-route portion of a voyage, approaching the destination, and mooring, the industry term for this is 'berth to...
s.

Deat sir, i have 36 months of sea service presently i m sailing as a able seamen.i have not done my g.p course i received my c.d.c on the basi...
More
x