Encyclopedia
Sebastes is a genus
Genus
In biology, a genus is a low-level taxonomic rank used in the biological classification of living and fossil organisms, which is an example of definition by genus and differentia...
of fish
Fish
Fish are a paraphyletic group of organisms that consist of all gill-bearing aquatic vertebrate animals that lack limbs with digits. Included in this definition are the living hagfish, lampreys, and cartilaginous and bony fish, as well as various extinct related groups...
in the family Sebastidae
Sebastidae
Sebastidae is a family of marine fish in the order Scorpaeniformes. Their common names include rockfishes, thornyheads and rockcods. Despite the latter name, they are not closely related to the cods in the genus Gadus, nor the rock cod, Lotella rhacina.Not all authorities recognise this family as...
(though some include this in Scorpaenidae), most of which have the common name of rockfish. Most of the world's almost 110 Sebastes species live in the north Pacific
Pacific Ocean
The Pacific Ocean is the largest of the Earth's oceanic divisions. It extends from the Arctic in the north to the Southern Ocean in the south, bounded by Asia and Australia in the west, and the Americas in the east.At 165.2 million square kilometres in area, this largest division of the World...
, although two (S. capensis and S. oculatus) live in the south Pacific/Atlantic
Atlantic Ocean
The Atlantic Ocean is the second-largest of the world's oceanic divisions. With a total area of about , it covers approximately 20% of the Earth's surface and about 26% of its water surface area...
and four (S. fasciatus, S. marinus, S. mentella and S. viviparus) live in the north Atlantic. The coast off South California
California
California is a state located on the West Coast of the United States. It is by far the most populous U.S. state, and the third-largest by land area...
is the area of highest rockfish diversity
Species richness
Species richness is the number of different species in a given area. It is represented in equation form as S.Species richness is the fundamental unit in which to assess the homogeneity of an environment. Typically, species richness is used in conservation studies to determine the sensitivity of...
, with 56 species living in the Southern California Bight
Southern California Bight
The Southern California Bight includes coastal southern California, the Channel Islands and part of the Pacific Ocean.Within the Southern California bight lie the traditional territories of the Chumash and the Gabrieliño. These two cultures are considered the epitome of hunter-gatherer complexity...
.

The fossil record of rockfish goes back to the Miocene
Miocene
The Miocene is a geological epoch of the Neogene Period and extends from about . The Miocene was named by Sir Charles Lyell. Its name comes from the Greek words and and means "less recent" because it has 18% fewer modern sea invertebrates than the Pliocene. The Miocene follows the Oligocene...
, from California and Japan (although fossil otolith
Otolith
An otolith, , also called statoconium or otoconium is a structure in the saccule or utricle of the inner ear, specifically in the vestibular labyrinth of vertebrates. The saccule and utricle, in turn, together make the otolith organs. They are sensitive to gravity and linear acceleration...
s from Belgium
Belgium
Belgium , officially the Kingdom of Belgium, is a federal state in Western Europe. It is a founding member of the European Union and hosts the EU's headquarters, and those of several other major international organisations such as NATO.Belgium is also a member of, or affiliated to, many...
, "Sebastes" weileri, may push the record back as far as the Oligocene
Oligocene
The Oligocene is a geologic epoch of the Paleogene Period and extends from about 34 million to 23 million years before the present . As with other older geologic periods, the rock beds that define the period are well identified but the exact dates of the start and end of the period are slightly...
).

Rockfish range from the intertidal zone
Intertidal zone
The intertidal zone is the area that is above water at low tide and under water at high tide . This area can include many different types of habitats, with many types of animals like starfish, sea urchins, and some species of coral...
to almost 3000 metres (9,842.5 ft) deep, usually living benthically on various substrates, often (as the name suggests) around rock outcrops. Some rockfish species are very long lived, amongst the longest living fish on earth, with a maximum reported age of 205 years for S. aleutianus (Cailliet et al. 2001).

Rockfish are an important sport and commercial fish, and many species have been overfished. As a result seasons are tightly controlled in many areas. 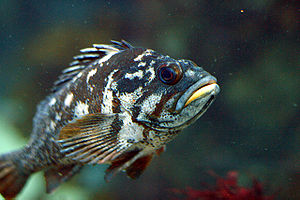 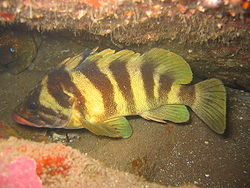