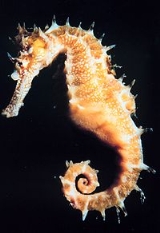 Overview
Seahorses compose the fish genus
Genus
In biology, a genus is a low-level taxonomic rank used in the biological classification of living and fossil organisms, which is an example of definition by genus and differentia...
Hippocampus within the family Syngnathidae
Syngnathidae
Syngnathidae is a family of fish which includes the seahorses, the pipefishes, and the weedy and leafy sea dragons. The name is derived from Greek, meaning "fused jaw" - syn meaning fused or together, and gnathus meaning jaws. This fused jaw trait is something the entire family has in common...
, in order
Order (biology)
In scientific classification used in biology, the order is# a taxonomic rank used in the classification of organisms. Other well-known ranks are life, domain, kingdom, phylum, class, family, genus, and species, with order fitting in between class and family...
Syngnathiformes
Syngnathiformes
Syngnathiformes is an order of ray-finned fishes that includes the pipefishes and seahorses.These fishes have elongate, narrow, bodies surrounded by a series of bony rings, and small, tubular mouths. Several groups live among seaweed and swim with the body aligned vertically, to blend in with the...
. Syngnathidae also includes the pipefish
Pipefish
Pipefishes or pipe-fishes are a subfamily of small fishes, which, together with the seahorses, form the family Syngnathidae.-Anatomy:...
es. "Hippocampus" comes from the Ancient Greek
Ancient Greek
Ancient Greek is the stage of the Greek language in the periods spanning the times c. 9th–6th centuries BC, , c. 5th–4th centuries BC , and the c. 3rd century BC – 6th century AD of ancient Greece and the ancient world; being predated in the 2nd millennium BC by Mycenaean Greek...
hippos meaning "horse" and kampos meaning “sea monster”.

There are nearly 50 species of seahorse. They are mainly found in shallow tropical and temperate waters throughout the world. They prefer to live in sheltered areas such as seagrass
Seagrass
Seagrasses are flowering plants from one of four plant families , all in the order Alismatales , which grow in marine, fully saline environments.-Ecology:...
beds, coral reef
Coral reef
Coral reefs are underwater structures made from calcium carbonate secreted by corals. Coral reefs are colonies of tiny living animals found in marine waters that contain few nutrients. Most coral reefs are built from stony corals, which in turn consist of polyps that cluster in groups. The polyps...
s, or mangroves.

I would only like to ask if there's such a fossil seahorse that is as large as present day horse.., Thanks for sharing your time.

What are their adaptations?

Is a seahorse really a horse if not what is it?

What is the habitat of the slender seahorse?
More
x