The seabed is the bottom of the ocean
Ocean
An ocean is a major body of saline water, and a principal component of the hydrosphere. Approximately 71% of the Earth's surface is covered by ocean, a continuous body of water that is customarily divided into several principal oceans and smaller seas.More than half of this area is over 3,000...
. 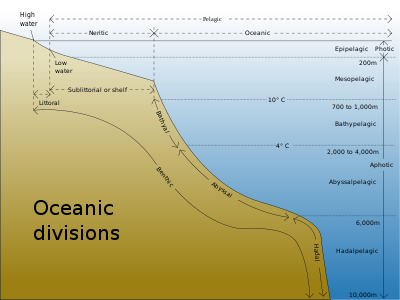 Most of the oceans have a common structure, created by common physical phenomena, mainly from tectonic movement, and sediment from various sources. The structure of the oceans, starting with the continents, begins usually with a continental shelf
Continental shelf
The continental shelf is the extended perimeter of each continent and associated coastal plain. Much of the shelf was exposed during glacial periods, but is now submerged under relatively shallow seas and gulfs, and was similarly submerged during other interglacial periods. The continental margin,...
, continues to the continental slope - which is a steep descent into the ocean, until reaching the abyssal plain
Abyssal plain
An abyssal plain is an underwater plain on the deep ocean floor, usually found at depths between 3000 and 6000 metres. Lying generally between the foot of a continental rise and a mid-ocean ridge, abyssal plains cover more than 50% of the Earth’s surface. They are among the flattest, smoothest...
- a topographic plain
Plain
In geography, a plain is land with relatively low relief, that is flat or gently rolling. Prairies and steppes are types of plains, and the archetype for a plain is often thought of as a grassland, but plains in their natural state may also be covered in shrublands, woodland and forest, or...
, the beginning of the seabed, and its main area. The border between the continental slope and the abyssal plain usually has a more gradual descent, and is called the continental rise
Continental rise
The continental rise is an underwater feature found between the continental slope and the abyssal plain. This feature can be found all around the world, and it represents the final stage in the boundary between continents and the deepest part of the ocean...
, which is caused by sediment
Sediment
Sediment is naturally occurring material that is broken down by processes of weathering and erosion, and is subsequently transported by the action of fluids such as wind, water, or ice, and/or by the force of gravity acting on the particle itself....
cascading down the continental slope.

The mid-ocean ridge
Mid-ocean ridge
A mid-ocean ridge is a general term for an underwater mountain system that consists of various mountain ranges , typically having a valley known as a rift running along its spine, formed by plate tectonics. This type of oceanic ridge is characteristic of what is known as an oceanic spreading...
, as its name implies, is a mountainous rise through the middle of all the oceans, between the continents. Typically a rift
Rift
In geology, a rift or chasm is a place where the Earth's crust and lithosphere are being pulled apart and is an example of extensional tectonics....
runs along the edge of this ridge. Along tectonic plate edges there are typically oceanic trenches - deep valleys, created by the mantle circulation movement from the mid-ocean mountain ridge to the oceanic trench.

Hotspot
Hotspot
Hot spot generally refers to small areas of intense or important activity embedded in a larger area of relative calm. Specifically, it may refer to:-Arts and entertainment:* Hot Spot , a 1963 Musical...
volcanic island ridges are created by volcanic activity, erupting periodically, as the tectonic plates pass over a hotspot. In areas with volcanic activity and in the oceanic trenches, there are Hydrothermal vents - releasing high pressure and extremely hot water and chemicals into the typically freezing water around it.

The ocean water is divided into layers, each with typical features of salinity, pressure, temperature and marine life, according to their depth called Abyssal zones. Lying along the top of the abyssal plain
Abyssal plain
An abyssal plain is an underwater plain on the deep ocean floor, usually found at depths between 3000 and 6000 metres. Lying generally between the foot of a continental rise and a mid-ocean ridge, abyssal plains cover more than 50% of the Earth’s surface. They are among the flattest, smoothest...
is the abyssalpelagic layer, whose lower boundary lies at about 6,000 metres (20,000 ft). The hadalpelagic - which includes the oceanic trenches, lies between 6,000–11,000 metres (20,000–36,000 ft) and is the deepest oceanic zone.

Each area of the seabed has typical features such as common soil composition, typical topography, salinity of water layers above it, marine life, magnetic direction of rocks, and sedimenting.

Seabed topography is flat where sedimenting is heavy and covers the tectonic features. Sedimenting comes from various sources:

Where sedimenting is avoided, such as in the Atlantic ocean
Atlantic Ocean
The Atlantic Ocean is the second-largest of the world's oceanic divisions. With a total area of about , it covers approximately 20% of the Earth's surface and about 26% of its water surface area...
especially in the northern and eastern Atlantic, the original tectonic activity can be clearly seen as straight line "cracks" or "vents" thousands of kilometers long.

Recently there has been the discovery of abundant marine life in the deep sea
Deep sea
The deep sea, or deep layer, is the lowest layer in the ocean, existing below the thermocline and above the seabed, at a depth of 1000 fathoms or more. Little or no light penetrates this part of the ocean and most of the organisms that live there rely for subsistence on falling organic matter...
, especially around hydrothermal vents. Large deep sea communities
Deep sea communities
Deep sea communities currently remain largely unexplored, due the technological and logististical challenges and expense involved in visiting these remote biomes. Because of the unique challenges , it was long believed that little life existed in this hostile environment...
of marine life have been discovered around black and white 'smokers' - hydrothermal vents emitting typical chemicals toxic to humans and most of the vertebrates. This marine life receives its energy from both the extreme temperature difference (typically a drop of 150 degrees) and from chemosynthesis
Chemosynthesis
In biochemistry, chemosynthesis is the biological conversion of one or more carbon molecules and nutrients into organic matter using the oxidation of inorganic molecules or methane as a source of energy, rather than sunlight, as in photosynthesis...
by bacteria
Bacteria
Bacteria are a large domain of prokaryotic microorganisms. Typically a few micrometres in length, bacteria have a wide range of shapes, ranging from spheres to rods and spirals...
.

The seabed has been explored by submersibles such as Alvin
DSV Alvin
Alvin is a manned deep-ocean research submersible owned by the United States Navy and operated by the Woods Hole Oceanographic Institution in Woods Hole, Massachusetts. The vehicle was built by General Mills' Electronics Group in the same factory used to manufacture breakfast cereal-producing...
and, to some extent, scuba divers with special apparatuses. The process that continually adds new material to the ocean floor is seafloor spreading
Seafloor spreading
Seafloor spreading is a process that occurs at mid-ocean ridges, where new oceanic crust is formed through volcanic activity and then gradually moves away from the ridge. Seafloor spreading helps explain continental drift in the theory of plate tectonics....
and the continental slope. In recent years satellite images show a very clear mapping of the seabed, and are used extensively in the study and exploration of the ocean floor.

see History of Oceanography for a full description of the history of ocean exploration, including the seabed.


In art and culture