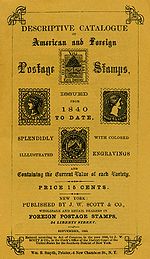 The Scott catalogue of postage stamp
Postage stamp
A postage stamp is a small piece of paper that is purchased and displayed on an item of mail as evidence of payment of postage. Typically, stamps are made from special paper, with a national designation and denomination on the face, and a gum adhesive on the reverse side...
s, published by Scott Publishing Co, a subsidiary of Amos Press, is updated annually and lists all the stamps of the entire world which its editors recognize as issued for postal purposes. It is published in six large volumes (as of 2008) and is also produced in non-printable CD and DVD editions. The numbering system
Stamp numbering system
Philatelists' traditional method of identifying postage stamps uniquely has long been to number each country's stamps consecutively; Norway #1 is the 4-skilling blue stamp issued in 1855, and so forth...
used by Scott to identify stamps is dominant among stamp collectors
Stamp collecting
Stamp collecting is the collecting of postage stamps and related objects. It is one of the world's most popular hobbies, with the number of collectors in the United States alone estimated to be over 20 million.- Collecting :...
in the United States and Canada.

The first Scott catalogue was a 21-page pamphlet with the title
Descriptive Catalogue of American and Foreign Postage Stamps, Issued from 1840 to Date, Splendidly Illustrated with Colored Engravings and Containing the Current Value of each Variety. It was published in September 1868 by John Walter Scott
John Walter Scott
John Walter Scott , of New York City, was originally from England, but he emigrated to the United States to take part in the California Gold Rush. Unsuccessful at the prospecting trade, Scott began to sell postage stamps for collectors and in a short period of time became the nation’s leading stamp...
, an early stamp dealer in New York
New York
New York is a state in the Northeastern region of the United States. It is the nation's third most populous state. New York is bordered by New Jersey and Pennsylvania to the south, and by Connecticut, Massachusetts and Vermont to the east...
, and purported to list all the stamps of the world, with prices for each. A notice inside does caution the reader that "it is simply impossible for any one to always have every stamp" in stock. The original catalog has been reprinted.

In subsequent years, the Scott company gave up dealing in stamps but continued to publish the catalog, gradually providing more detail as the hobby
Hobby
A hobby is a regular activity or interest that is undertaken for pleasure, typically done during one's leisure time.- Etymology :A hobby horse is a wooden or wickerwork toy made to be ridden just like a real horse...
evolved and collectors became more sophisticated. In addition to the factual information about the stamps, the catalog includes price information based on market analysis
Market analysis
A market analysis studies the attractiveness and the dynamics of a special market within a special industry. It is part of the industry analysis and this in turn of the global environmental analysis. Through all these analyses the chances, strengths, weaknesses and risks of a company can be...
and reported sales from the previous year. As of 2006, and despite annual changes to save space, the catalog was more than 5,000 pages. 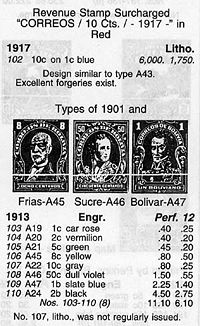 The Scott numbering system
Stamp numbering system
Philatelists' traditional method of identifying postage stamps uniquely has long been to number each country's stamps consecutively; Norway #1 is the 4-skilling blue stamp issued in 1855, and so forth...
assigns plain numbers for regular mail stamps, and uses capital letter prefixes for special-purpose types, such as "B" for semi-postals and "C" for airmail
Airmail stamp
An airmail stamp is a postage stamp intended to pay either an airmail fee that is charged in addition to the surface rate, or the full airmail rate, for a piece of mail to be transported by air....
. The numbers are generally consecutive; there are gaps among older stamps, where some numbered types were later renumbered, and among newer stamps where Scott has left numbers unassigned in the anticipation of additional stamps in a series. If more stamps than expected appear, Scott will add a capital letter as suffix, or if the change is very recent, it will renumber stamps.
Minor variations, such as shades or errors, get a lowercase letter; so the "C3a" above indicates a variation (error in this case) on the third US airmail stamp
Inverted Jenny
The Inverted Jenny is a United States postage stamp first issued on May 10, 1918 in which the image of the Curtiss JN-4 airplane in the center of the design was accidentally printed upside-down; it is probably the most famous error in American philately...
.

Because of its commercial importance the publishers of the Scott Catalogue claim copyright
Copyright
Copyright is a legal concept, enacted by most governments, giving the creator of an original work exclusive rights to it, usually for a limited time...
on their numbering systems, and grant only limited licences for their use by others. The inconsistency with which Scott enforced these licences resulted in a lawsuit by Krause Publications
Krause Publications
Krause Publications is a publisher of leisure-time & enthusiast magazines and books. Best known for its Standard Catalog of World Coins, a series of numismatic catalogs commonly referred to as Krause-Mishler catalogues or simply Krause catalogues. They provide information, pricing, and...
(publishers of the Minkus Catalogue) for copyright infringement. After Krause filed a defence the suit was settled out of court, and Krause continued to reference the Scott numbers. It has been speculated that Scott was not successful .

Editors of this, the dominant catalog in the US, have great influence over what is and is not considered to be a valid postage stamp. For instance, in the 1960s the countries of the United Arab Emirates
United Arab Emirates
The United Arab Emirates, abbreviated as the UAE, or shortened to "the Emirates", is a state situated in the southeast of the Arabian Peninsula in Western Asia on the Persian Gulf, bordering Oman, and Saudi Arabia, and sharing sea borders with Iraq, Kuwait, Bahrain, Qatar, and Iran.The UAE is a...
issued many stamps that were likely never actually on sale in a post office
Post office
A post office is a facility forming part of a postal system for the posting, receipt, sorting, handling, transmission or delivery of mail.Post offices offer mail-related services such as post office boxes, postage and packaging supplies...
, so Scott does not list them. One must go to a Michel catalog
Michel catalog
The Michel catalog is the largest and best-known stamp catalog in the German-speaking world. First published in 1910, it has become an important reference work for philately, with information not available in the English-language Scott catalog.The catalog started out as a price list for the dealer...
, for instance, to see them described. The lack of a Scott listing, though, means that most American dealers will refuse to trade in such stamps. 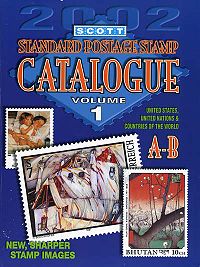 Similarly, Scott does not list most stamps from countries embargo
Embargo
An embargo is the partial or complete prohibition of commerce and trade with a particular country, in order to isolate it. Embargoes are considered strong diplomatic measures imposed in an effort, by the imposing country, to elicit a given national-interest result from the country on which it is...
ed by the US government, or in some cases lists them but with no prices. To some extent, this is unavoidable, since the ban on importation means that Scott's editors are unable even to acquire copies of the stamps to be described. Moreover, since US dealers and collectors are unable to buy the stamps legally, they are unlikely to have any need of the data. (Again, interested persons typically use Michel
Michel catalog
The Michel catalog is the largest and best-known stamp catalog in the German-speaking world. First published in 1910, it has become an important reference work for philately, with information not available in the English-language Scott catalog.The catalog started out as a price list for the dealer...
or other catalogs instead.) The policy changes with government policy; stamps of Libya
Libya
Libya is an African country in the Maghreb region of North Africa bordered by the Mediterranean Sea to the north, Egypt to the east, Sudan to the southeast, Chad and Niger to the south, and Algeria and Tunisia to the west....
and North Vietnam
North Vietnam
The Democratic Republic of Vietnam , was a communist state that ruled the northern half of Vietnam from 1954 until 1976 following the Geneva Conference and laid claim to all of Vietnam from 1945 to 1954 during the First Indochina War, during which they controlled pockets of territory throughout...
recently reappeared in Scott after an absence of some years.

The dominance of Scott is such that US collectors know many of the numbers by heart, and dealers need only mention the number in their price lists. For instance, United States no. "C3a" is instantly recognized as the Inverted Jenny
Inverted Jenny
The Inverted Jenny is a United States postage stamp first issued on May 10, 1918 in which the image of the Curtiss JN-4 airplane in the center of the design was accidentally printed upside-down; it is probably the most famous error in American philately...
, a rare US airmail inverted error stamp.

The contents of each volume (in current editions) are as follows :

In May, 2001 Scott announced a project to include a scan of each stamp in its catalogues. Many were made from its own reference collection
Reference collection
A reference collection is a collection of objects maintained for the purpose of study and authentication. Reference collections are generally large undertakings maintained by institutions; instead of having a single representative of each object, they will typically have multiples, so as to...
and introduced in the 6 volume 2002 edition as black and white images. Color images were introduced in 2003 in the Classic Specialized Catalogue and in 2005 in the Specialized Catalogue of United States. In 2006 color images were included in the main Scott catalogues. Shortly after the program was announced Scott Publishing received a letter from Hsien-ming Meng, a physician in Dayton, Ohio and worldwide collector of mint stamps with a nearly complete collection. Dr. Meng offered to permit scanning of his collection, an offer that was eagerly accepted by Scott Publishing. Scans from Dr. Meng's collection began appearing in volume 4 of the 2002 catalog. Together with generous access by many other collectors Dr. Meng's cooperation has resulted in creation of scanned images of all but 500 stamps by Scott as of 2011. Dr. Meng, born in 1926, died February 8, 2011.

Scott Publishing Co also produces a related volume which more comprehensively lists all United States Postage Stamps and Postal History. It is generally known as the "Scott Specialized" and is regarded by many as the definitive single volume reference to USA postage stamps. The catalogue provides more detail than Volume One, with particular emphasis on varieties and errors. A new edition of the catalogue is produced annually with a particular edition year date generally indicating production in the middle of the previous year. Biannual Valuing Supplements are also issued in the Spring and Fall.


Scott Classic Specialized Catalogue: Stamps and Covers of the World

Scott Classic Specialized Catalogue: Stamps and Covers of the World is limited to stamps and covers that were produced between 1840-1940 or for the British Commonwealth nations to 1952. It covers all postage stamp producing nations in one volume for those years.