A schoolgirl is a girl
Girl
A girl is any female human from birth through childhood and adolescence to attainment of adulthood. The term may also be used to mean a young woman.-Etymology:...
attending either primary or secondary school, generally aged between four and eighteen years old. 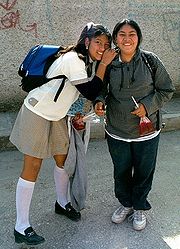 This has led in some countries to calls for greater equality for education in the school system. In the United States, according to The National Center for Fair & Open Testing, "despite the fact that females earn higher grades throughout both high school and college, they consistently receive lower scores on the exam than do their male counterparts. Some researchers, such as Howe, have argued that schoolgirls respond less well to a competitive environment than do schoolboys, and some argue that girls are better suited to a single sex classroom environment. 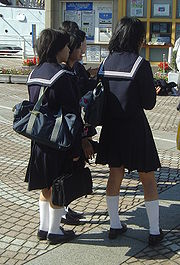 In many schools, students are required to wear school uniform
School uniform
A school uniform is an outfit—a set of standardized clothes—worn primarily for an educational institution. They are common in primary and secondary schools in various countries . When used, they form the basis of a school's dress code.Traditionally school uniforms have been largely subdued and...
s. For many girls, this gives them a sense of collective identity
Cultural identity
Cultural identity is the identity of a group or culture, or of an individual as far as one is influenced by one's belonging to a group or culture. Cultural identity is similar to and has overlaps with, but is not synonymous with, identity politics....
, unity and equality. Girls options for a school uniform generally consist of culottes, dresses, skirts (sometimes with bike shorts or leggings underneath) and bootleg pants.