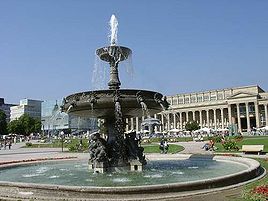 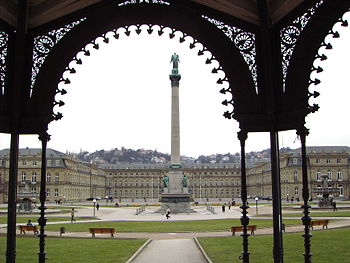 Schlossplatz is the largest square in the centre of the city of Stuttgart
Stuttgart
Stuttgart is the capital of the state of Baden-Württemberg in southern Germany. The sixth-largest city in Germany, Stuttgart has a population of 600,038 while the metropolitan area has a population of 5.3 million ....
and home to the New Castle
New Castle (Stuttgart)
The New Palace is a building which stands on the south edge of Schlossplatz, the central square in Stuttgart, Germany. The castle is built in late Baroque style....
which was built between 1746 and 1807.

Schlossplatz stands next to two other popular squares in Stuttgart: Karlspatz to the south and Schillerplatz
Schillerplatz (Stuttgart)
Schillerplatz is a square in the old city centre of Stuttgart, Germany named in honour of the German poet, philosopher, historian, and dramatist Friedrich Schiller...
to the south west.

The entire square was last fully renovated in 1977 to mark the staging of the Bundesgartenschau
Bundesgartenschau
The Bundesgartenschau is the biennial Federal horticulture show in Germany. It also covers topics like landscaping. Taking place in different cities, the location changes in a two-year cycle....
(State Garden Show) in Stuttgart. The lawns and flowerbeds were renewed in 2006 following the staging of the 2006 World Cup Finals
FIFA World Cup
The FIFA World Cup, often simply the World Cup, is an international association football competition contested by the senior men's national teams of the members of Fédération Internationale de Football Association , the sport's global governing body...
.

Every year Schlossplatz is home to major outdoor events such as open air concerts, children's fairs and parts of the Christmas market including an outdoor ice rink. During the 2006 World Cup Finals
FIFA World Cup
The FIFA World Cup, often simply the World Cup, is an international association football competition contested by the senior men's national teams of the members of Fédération Internationale de Football Association , the sport's global governing body...
the square regularly held more than 40,000 spectators who watched live matches on 3 huge screens.

Schlossplatz featured the United Buddy Bears
United Buddy Bears
Buddy Bears are a series of painted, life-size fibreglass bear sculptures originally developed in Berlin, Germany. The first Buddy Bear was created by the German businesspeople Klaus and Eva Herlitz, in cooperation with the sculptor Roman Strobl in 2001....
exhibition in summer 2008 - an array of 144 two metre-high sculptures, each designed by a different artist, touring the world as a symbol of cultural understanding, tolerance and mutual trust.
The source of this article is wikipedia, the free encyclopedia.  The text of this article is licensed under the GFDL.