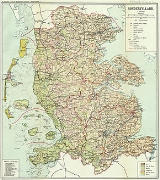 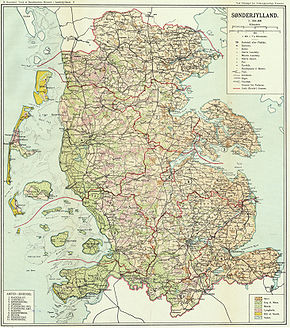 The Schleswig Plebiscites were two plebiscites, organized according to section XII, articles 109 to 114 of the Treaty of Versailles
Treaty of Versailles
The Treaty of Versailles was one of the peace treaties at the end of World War I. It ended the state of war between Germany and the Allied Powers. It was signed on 28 June 1919, exactly five years after the assassination of Archduke Franz Ferdinand. The other Central Powers on the German side of...
of June 28, 1919, in order to determine the future border between Denmark
Denmark
Denmark is a Scandinavian country in Northern Europe. The countries of Denmark and Greenland, as well as the Faroe Islands, constitute the Kingdom of Denmark . It is the southernmost of the Nordic countries, southwest of Sweden and south of Norway, and bordered to the south by Germany. Denmark...
and Germany
Germany
Germany , officially the Federal Republic of Germany , is a federal parliamentary republic in Europe. The country consists of 16 states while the capital and largest city is Berlin. Germany covers an area of 357,021 km2 and has a largely temperate seasonal climate...
through the former duchy of Schleswig
Schleswig
Schleswig or South Jutland is a region covering the area about 60 km north and 70 km south of the border between Germany and Denmark; the territory has been divided between the two countries since 1920, with Northern Schleswig in Denmark and Southern Schleswig in Germany...
. The process was monitored by a commission with representatives from France
France
The French Republic , The French Republic , The French Republic , (commonly known as France , is a unitary semi-presidential republic in Western Europe with several overseas territories and islands located on other continents and in the Indian, Pacific, and Atlantic oceans. Metropolitan France...
, the United Kingdom
United Kingdom
The United Kingdom of Great Britain and Northern IrelandIn the United Kingdom and Dependencies, other languages have been officially recognised as legitimate autochthonous languages under the European Charter for Regional or Minority Languages...
, Norway
Norway
Norway , officially the Kingdom of Norway, is a Nordic unitary constitutional monarchy whose territory comprises the western portion of the Scandinavian Peninsula, Jan Mayen, and the Arctic archipelago of Svalbard and Bouvet Island. Norway has a total area of and a population of about 4.9 million...
and Sweden
Sweden
Sweden , officially the Kingdom of Sweden , is a Nordic country on the Scandinavian Peninsula in Northern Europe. Sweden borders with Norway and Finland and is connected to Denmark by a bridge-tunnel across the Öresund....
.

The Danish-ruled Duchy of Schleswig had been conquered by Prussia and Austria in the 1864 Second War of Schleswig
Second War of Schleswig
The Second Schleswig War was the second military conflict as a result of the Schleswig-Holstein Question. It began on 1 February 1864, when Prussian forces crossed the border into Schleswig.Denmark fought Prussia and Austria...
along with the Danish-ruled German provinces of Holstein
Holstein
Holstein is the region between the rivers Elbe and Eider. It is part of Schleswig-Holstein, the northernmost state of Germany....
and Lauenburg. Article 5 of the Austro-Prussian Peace of Prague
Peace of Prague (1866)
The Peace of Prague was a peace treaty signed at Prague on 23 August 1866, which ended the Austro-Prussian War. The treaty was lenient toward the Austrian Empire because Otto von Bismarck had persuaded William I that maintaining Austria's place in Europe would be better in the future for Prussia...
stipulated that a plebiscite should be held within 6 years to give the people of the northern part of Schleswig the possibility of voting between staying German or separating parts of Schleswig and repartitioning them to Denmark, an arrangement already denied by Denmark after the war of 1848 and again after the war of 1864, and then dropped completely in 1878 in the Treaty of Gastein between Austria and Imperial Germany. The border was respected later by both Denmark and Germany in the Optant Treaty of Copenhagen 1907. After the defeat of Germany in World War I
World War I
World War I , which was predominantly called the World War or the Great War from its occurrence until 1939, and the First World War or World War I thereafter, was a major war centred in Europe that began on 28 July 1914 and lasted until 11 November 1918...
Germany was forced to accept a plebiscite whose unilateral conditions then were defined by Denmark.

The plebiscites were held in two zones that were defined by Denmark. according to the ideas of the Danish historian Hans Victor Clausen Zone I was dimensioned as far towards the South as possible, therefore changing the Clausen-Line southerly from Tondern instead of northerly, and had to vote en bloc, all of it to one country or another, while, in the following smaller Zone II, each municipality
Municipality
A municipality is essentially an urban administrative division having corporate status and usually powers of self-government. It can also be used to mean the governing body of a municipality. A municipality is a general-purpose administrative subdivision, as opposed to a special-purpose district...
was to decide its own allegiance, allowing Denmark to gain further territory and put the frontier farther southward according to eventual majorities in northern municipalities .

The first plebiscite was held in Zone I, the later Northern Schleswig on February 10, 1920. There, 74.9 % (75,431 votes) of the public voted to come under Danish rule, 25.1 % (25,329 votes) to stay German, but in three of the four major towns, especially in the southern region directly at the frontier to Zone II German majorities existed, especially a large German majority between 70% and 80% in and around Tønder
Tønder
Tønder is a municipality in Region of Southern Denmark on the Jutland peninsula in south Denmark. The municipality covers an area of 1,278 km², and has a total population of 40,367...
and Højer
Højer
Højer , is a town with a population of 1,255 and a former municipality in south Denmark, in Region of Southern Denmark on the west coast of the Jutland peninsula. The municipality covered an area of 117 km², and had a total population of 2,861...
. It was mostly this area that caused discussions after the voting, especially as this area had been regarded also by Clausen to be south of an imaginary German-Danish border.

Central Schleswig (Zone II) voted on March 14, 1920. 80.2 % (51,742 votes) fell to Germany, 19.8 % (12,800) to Denmark. Since a Danish majority in this zone was produced in only three small villages on the island of Föhr
Föhr
Föhr is one of the North Frisian Islands on the German coast of the North Sea. It is part of the Nordfriesland district in the federal state of Schleswig-Holstein. Föhr is the second-largest North Sea island of Germany....
, none of which were aligned with the coming border, the Commission Internationale de Surveillance du Plébiscite Slésvig decided on a line almost identical to the border between the two zones. The poor result for Denmark in Central Schleswig, particularly in Flensburg
Flensburg
Flensburg is an independent town in the north of the German state of Schleswig-Holstein. Flensburg is the centre of the region of Southern Schleswig...
, Schleswig's largest city, triggered Denmark's 1920 Easter Crisis
Easter Crisis of 1920
The Easter Crisis of 1920 was a constitutional crisis and a significant event in the development of constitutional monarchy in Denmark. It began with the dismissal of the elected government by the reigning monarch, King Christian X, a reserve power which was granted to him by the Danish constitution...
.

A plebiscite was not held in the southernmost third of the province (Zone III) as the population was almost all pro-German.

Directly after the announcement of the results from Zone I, an alternative draft for the frontier was made by the German historian Johannes Tiedje. The proposed frontier would have incorporated Tondern, Hoyer, Tingleff and neighbouring areas and also some parts north from Flensburg – the so called Tiedje Belt – and would have created almost equal minorities on both sides of the frontier instead of 30,000 to 35,000 Germans in Denmark and 6,000 to 8,000 Danes in Germany.

This and suggestions like this were not accepted and so Northern Schleswig was surrendered to Denmark on 15 June 1920, and the territory was officially named the South Jutlandic districts, more commonly Southern Jutland
Southern Jutland
Southern Jutland is the name for the region south of the Kongeå in Jutland, Denmark. The region north of the Kongeå is called Nørrejylland . Both territories had their own ting assemblies in the Middle Ages . South Jutland is mentioned for the first time in the Knýtlinga saga.In the 13th century...
, although this name is historically identical to the whole of Schleswig
Schleswig
Schleswig or South Jutland is a region covering the area about 60 km north and 70 km south of the border between Germany and Denmark; the territory has been divided between the two countries since 1920, with Northern Schleswig in Denmark and Southern Schleswig in Germany...
.