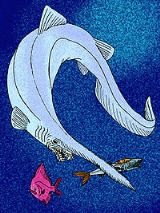 Encyclopedia
Scapanorhynchus is an extinct genus of shark
Shark
Sharks are a type of fish with a full cartilaginous skeleton and a highly streamlined body. The earliest known sharks date from more than 420 million years ago....
from the Cretaceous
Cretaceous
The Cretaceous , derived from the Latin "creta" , usually abbreviated K for its German translation Kreide , is a geologic period and system from circa to million years ago. In the geologic timescale, the Cretaceous follows the Jurassic period and is followed by the Paleogene period of the...
era. Their extreme similarities to the living goblin shark
Goblin shark
The goblin shark, Mitsukurina owstoni, is a deep-sea shark, the sole living species in the family Mitsukurinidae. The most distinctive characteristic of the goblin shark is the unusual shape of its head. It has a long, trowel-shaped, beak-like rostrum or snout, much longer than other sharks' snouts...
, Mitsukurina owstoni, lead some experts to consider reclassifying it as Scapanorhynchus owstoni. However, most shark specialists regard the goblin shark to be distinct enough from its prehistoric relatives to merit placement in its own genus.

Scapanorhynchus had an elongated, albeit, flattened snout, and sharp awl
Bradawl
A bradawl is a tool with a blade similar to that of a straight screwdriver and a handle made from wood or plastic. A bradawl is used to make an indentation in wood or other materials in order to ease the insertion of a nail or screw...
-shaped teeth, ideal for seizing fish, or tearing chunks of flesh from its prey.
The source of this article is wikipedia, the free encyclopedia.  The text of this article is licensed under the GFDL.