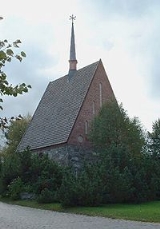 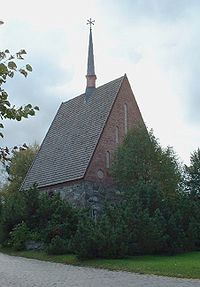 The Stone Sacristy is located in Savilahti, Mikkeli
Mikkeli
Mikkeli is a town and municipality in Finland. It is located in what used to be the province of Eastern Finland and is part of the Southern Savonia region. The municipality has a population of and covers an area of of which is water...
, Finland
Finland
Finland , officially the Republic of Finland, is a Nordic country situated in the Fennoscandian region of Northern Europe. It is bordered by Sweden in the west, Norway in the north and Russia in the east, while Estonia lies to its south across the Gulf of Finland.Around 5.4 million people reside...
and is the sacristy
Sacristy
A sacristy is a room for keeping vestments and other church furnishings, sacred vessels, and parish records.The sacristy is usually located inside the church, but in some cases it is an annex or separate building...
of the old church. It is considered to be one of Savonia
Savonia (historical province)
Savonia is a historical province in the east of Finland. It borders to Uusimaa, Tavastia, Ostrobothnia, and Karelia. Largest cities in Savo by population are Kuopio, Mikkeli, Savonlinna and Varkaus.-Administration:...
's oldest buildings and one of the most famous symbols of Mikkeli. No one is sure of the date it was built. The sacristy's current façade is the result of renovations in the 1930s.

In 1930, the town council
Town council
A town council is a democratically elected form of government for small municipalities or civil parishes. A council may serve as both the representative and executive branch....
granted the museum association funds to convert the sacristy into an ecclesiastical museum. The following year, the sacristy was opened as a museum with a collection of ecclesiastical artefacts from Mikkeli and the surrounding regions.