The old fortified city has been inhabited for more than 2,500 years and contains a wealth of intact architectural gems. It was declared a World Heritage Site
World Heritage Site
A UNESCO World Heritage Site is a place that is listed by the UNESCO as of special cultural or physical significance...
by the United Nations in 1986. Efforts are underway to preserve some of the oldest buildings, some of which, such the Samsarh and the Great Mosque of Sana'a
Great Mosque of Sana'a
Great Mosque of Sana'a is an ancient mosque in Sana'a, Yemen, just east of the old Ghumdan Palace. It dates to the 7th century and was reportedly built in part from the materials of the initial Ghumdan palace which was destroyed by Caliph Uthman because he feared it could be used as a stronghold...
, are more than 1400 years old. Surrounded by ancient clay walls which stand 9–14 m (29.5–45.9 ft) high, the old city contains more than 100 mosques, 12 hammams (baths) and 6,500 houses. Many of the houses resemble ancient skyscrapers, reaching several stories high and topped with flat roofs. They are decorated with elaborate friezes and intricately carved frames and stained-glass windows.

One of the most popular attractions is Suq al-Milh (Salt Market), where it is possible to buy not only salt but also bread, spices, raisins, cotton, copper, pottery, silverware, and antiques. The majestic 7th-century Jami' al-Kabir (Great Mosque) is one of the oldest in the Muslim world. The Bāb al-Yaman (Yemen Gate) is an iconized entry point through the city walls and is more than 1000 years old. Nearby is Tahreer Square, also known as Freedom Square or Change Square, which has been the site of protests
2011 Yemeni uprising
The 2011 Yemen Uprising followed the initial stages of the Tunisian Revolution and occurred simultaneously with the Egyptian Revolution and other mass protests in the Middle East in early 2011. In its early phase, protests in Yemen were initially against unemployment, economic conditions and...
and where Nobel Peace Prize winner Tawakel Karman
Tawakel Karman
Tawakel Karman became the international public face of the 2011 Yemeni uprising that is part of the Arab Spring uprisings...
has been camped in a tent throughout the Arab Spring
Arab Spring
The Arab Spring , otherwise known as the Arab Awakening, is a revolutionary wave of demonstrations and protests occurring in the Arab world that began on Saturday, 18 December 2010...
movement.

A commercial area of the old city is Al Madina, where development is proceeding rapidly. In addition to three large hotels, there are numerous stores and restaurants. The area also contains three parks and the President
Ali Abdullah Saleh
Field Marshal Ali Abdullah Saleh is the first President of the Republic of Yemen. Saleh previously served as President of the Yemen Arab Republic from 1978 until 1990, at which time he assumed the office of chairman of the Presidential Council of a post-unification Yemen. He is the...
's palace.


Sana'a is the fastest growing capital city in the world with a growth rate of 7%, while the growth rate of the nation as a whole is 3.2%. If the current rate is maintained, the population of Sana'a will double in ten years. The majority of this increase is due to rural to urban migration for employment.

Jews have been present in Yemen since the days of King Solomon and form one of the most historic Jewish diaspora
Jewish diaspora
The Jewish diaspora is the English term used to describe the Galut גלות , or 'exile', of the Jews from the region of the Kingdom of Judah and Roman Iudaea and later emigration from wider Eretz Israel....
s. After the creation of the state of Israel about 49,000 (of an estimated 51,000) of Yemeni Jews were airlifted to Israel, almost 10,000 of which were from Sana'a (see the English-language book Jews and Muslims in lower Yemen: a study in protection and restraint, 1918-1949). There was essentially no Jewish population in Sana'a until the Sa'dah insurgency
Sa'dah insurgency
The Shia Insurgency in Yemen, also known as the Houthi rebellion, Sa'dah War or Sa'dah conflict is a civil war in Northern Yemen. It began in June 2004 when dissident cleric Hussein Badreddin al-Houthi, head of the Shia Zaidiyyah sect, launched an uprising against the Yemeni government...
broke out in Saada Governorate in 2004. The Houthi
Houthis
The Houthis Houthis) are a Zaidi Shia insurgent group operating in Yemen. They have also been referred to as a "powerful clan," and by the title Ash-Shabab al-Muminin or Youthful Believers). The group takes its name from Hussein Badreddin al-Houthi, their former commander, who was reportedly...
rebels directly threatened the Jewish community in 2007, prompting the government of President Saleh to offer them refuge in Sana'a. As of 2010, there were around 70 Jews living in the capital under government protection.

As the capital city of Yemen, 40% of jobs in Sana'a are in the public sector. Other primary sources of formal employment in the city are trade and industry. Like many other cities in the developing world, Sana'a has a large informal sector which is estimated to constitute 32% of nongovernmental employment.
However, while there are a greater variety of jobs in Sana'a as compared to other cities in Yemen, there is also greater poverty and unemployment. It is estimated that 25% of the labor force in Sana'a is unemployed.

Yemenia
Yemenia
Yemenia , also known as Yemen Airways is the national airline of Yemen, based in Sana'a. It operates scheduled domestic and international passenger flights to destinations in Africa and the Middle East, as well as to Asia and Europe, out of its hubs at Sana'a International Airport, and Aden...
, the national airline of Yemen, has its head office in Sana'a. Sana'a International Airport
Sana'a International Airport
Sana'a International Airport or El Rahaba Airport is an international airport located in Sana'a, the capital of Yemen. The runway is shared with a large military base with several fighter jets and transport aircraft of the Yemeni Air Force.-Airlines and destinations:*Note: All flights operate...
is Yemen's main domestic and international airport. There is currently no rail network but there are plans to install one in the future. A primary means of transport in the city is via dababs, minibuses which carry about 10 people. Taxis are also a very common form of public transport and there are coaches to major cities such as Aden
Aden
Aden is a seaport city in Yemen, located by the eastern approach to the Red Sea , some 170 kilometres east of Bab-el-Mandeb. Its population is approximately 800,000. Aden's ancient, natural harbour lies in the crater of an extinct volcano which now forms a peninsula, joined to the mainland by a...
and Taiz. 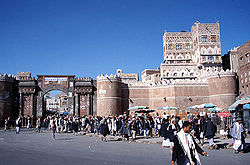 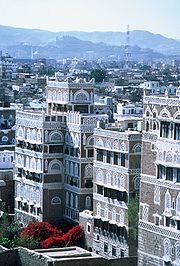 "" (Sana'a must be seen) are famous words first attributed to (768-820) who visited the ancient capital several times.

Many travellers in ancient days were impressed by the beauty of Sana'a. The well-known Yemeni geographer and historian al Hamdani marveled at the cleanliness of the city:
The Persian traveller Ibn Rustah, a contemporary of al-Hamdani, noted its food: 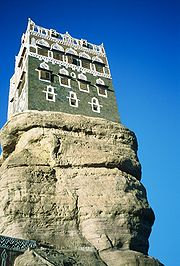 The British writer Jonathan Raban
Jonathan Raban
Jonathan Raban is a British travel writer and novelist. He has received several awards, such as the National Book Critics Circle Award, The Royal Society of Literature's Heinemann Award, the Thomas Cook Travel Book Award, the PEN West Creative Nonfiction Award, the Pacific Northwest Booksellers...
devotes a chapter of his 1979 book, 'Arabia Through the Looking Glass' to Sana'a. He initially found the city disorienting:
Later, as he became more familiar with the place, and had made more acquaintances with its residents, he becomes admiring. In one striking sequence where he is invited onto the roof of somebody's home, the cityscape is revealed to him in a different way:

Sana'a features the very rare mild version of a desert climate
Desert climate
A desert climate , also known as an arid climate, is a climate that does not meet the criteria to be classified as a polar climate, and in which precipitation is too low to sustain any vegetation at all, or at most a very scanty scrub.An area that features this climate usually experiences less than...
. Sana'a sees on average approximately 200 mm of precipitation per year. However, due to its high elevation, temperatures are much more moderate than many other cities on the Arabian Peninsula
Arabian Peninsula
The Arabian Peninsula is a land mass situated north-east of Africa. Also known as Arabia or the Arabian subcontinent, it is the world's largest peninsula and covers 3,237,500 km2...
. In fact, average temperatures remain relatively constant throughout the year in Sana'a, with its coldest month being January and its warmest month in July. The city seldom experiences extreme heat or cold. However, some areas around the city can see temperatures fall to around 15 or 20 degrees Fahrenheit during winter. Frost usually occurs in the early winter mornings, and there is a slight wind chill
Wind chill
Wind chill is the felt air temperature on exposed skin due to wind. The wind chill temperature is always lower than the air temperature, and the windchill is undefined at the higher temps...
in the city that causes the cold mornings to be oddly bitter. The Sun warms the city to the 60s during the noontime but it drops drastically as night falls in. Sana'a receives half of its annual rainfall during the months of July and August. Rainfall comes depending on the year; some years could see 500–600 mm of rainfall, while others can barely get 150 mm. High temperatures have increased slightly during the summer over the past few years, however, low temperatures and winter temperatures have dramatically fallen over the same period