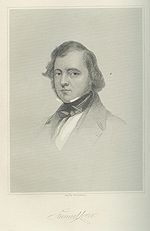 Samuel Lover was an Anglo-Irish
Anglo-Irish
Anglo-Irish was a term used primarily in the 19th and early 20th centuries to identify a privileged social class in Ireland, whose members were the descendants and successors of the Protestant Ascendancy, mostly belonging to the Church of Ireland, which was the established church of Ireland until...
songwriter, novelist, as well as a painter of portraits, chiefly miniatures. He was the grandfather of Victor Herbert
Victor Herbert
Victor August Herbert was an Irish-born, German-raised American composer, cellist and conductor. Although Herbert enjoyed important careers as a cello soloist and conductor, he is best known for composing many successful operettas that premiered on Broadway from the 1890s to World War I...
.

Samuel was born at number 60 Grafton Street and went to school at Samuel Whyte's at 79 Grafton Street, now home to Bewley's
Bewley's
Bewley's Limited is an Irish company, established in 1840, that produces tea and coffee for sale around the world. The company is owned by Campbell Bewley Group Ltd....
cafe. By 1830 he was secretary of the Royal Hibernian Academy
Royal Hibernian Academy
The Royal Hibernian Academy is an artist-based and artist-oriented institution in Ireland, founded in Dublin in 1823.-History:The RHA was founded as the result of 30 Irish artists petitioning the government for a charter of incorporation...
and lived at number 9 D'Olier Street
D'Olier Street
D'Olier Street is a street in the southern city-centre of Dublin, the capital of Ireland. It and Westmoreland Street are two broad streets whose northern ends meet at the southern end of O'Connell Bridge over the River Liffey...
.

Samuel eventually moved to London
London
London is the capital city of :England and the :United Kingdom, the largest metropolitan area in the United Kingdom, and the largest urban zone in the European Union by most measures. Located on the River Thames, London has been a major settlement for two millennia, its history going back to its...
and made his main residence there.

Lover produced a number of Irish songs, of which several — including The Angel's Whisper, Molly Bawn, and The Four-leaved Shamrock — attained great popularity. He also wrote some novels, of which Rory O'More
Rory (Roger) O'Moore
Rory O'Moore or Roger O'Moore , was an Irish noble and principal organizer of the Irish Rebellion of 1641.-Life:He belonged to an ancient Irish noble family claiming descent from the mythical Conall Cernach...
(in its first form a ballad), and Handy Andy
Handy Andy
Handy Andy may refer to:* Handy Andy, a book by Samuel Lover* Handy Andy , a brand of children's carpentry tools* Andy Kane, a carpenter in the BBC DIY TV show Changing Rooms...
are the best known, and short Irish sketches, which, with his songs, he combined into a popular entertainment called Irish Nights. He joined with Dickens in founding Bentley's Magazine.

"When once the itch of literature comes over a man, nothing can cure it but the scratching of a pen." - Samuel Lover

A memorial in St Patrick's Cathedral, Dublin summarises his achievements Poet, painter, novelist and composer, who, in the exercise of a genius as distinguished in its versatility as in its power, by his pen and pencil illustrated so happily the characteristics of the peasantry of his country that his name will ever be honourably identified with Ireland.