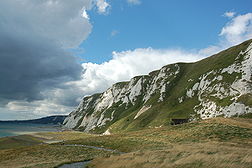 Samphire Hoe is a new part of Kent
Kent
Kent is a county in southeast England, and is one of the home counties. It borders East Sussex, Surrey and Greater London and has a defined boundary with Essex in the middle of the Thames Estuary. The ceremonial county boundaries of Kent include the shire county of Kent and the unitary borough of...
, United Kingdom
United Kingdom
The United Kingdom of Great Britain and Northern IrelandIn the United Kingdom and Dependencies, other languages have been officially recognised as legitimate autochthonous languages under the European Charter for Regional or Minority Languages...
, consisting of reclaimed land made from 4.9 million cubic metres of chalk marl
Marl
Marl or marlstone is a calcium carbonate or lime-rich mud or mudstone which contains variable amounts of clays and aragonite. Marl was originally an old term loosely applied to a variety of materials, most of which occur as loose, earthy deposits consisting chiefly of an intimate mixture of clay...
dug to create the Channel Tunnel
Channel Tunnel
The Channel Tunnel is a undersea rail tunnel linking Folkestone, Kent in the United Kingdom with Coquelles, Pas-de-Calais near Calais in northern France beneath the English Channel at the Strait of Dover. At its lowest point, it is deep...
, deposited on the seaward side of the famous White Cliffs of Dover
White cliffs of Dover
The White Cliffs of Dover are cliffs which form part of the British coastline facing the Strait of Dover and France. The cliffs are part of the North Downs formation. The cliff face, which reaches up to , owes its striking façade to its composition of chalk accentuated by streaks of black flint...
. It is accessible by the public via single-track tunnel controlled by traffic light
Traffic light
Traffic lights, which may also be known as stoplights, traffic lamps, traffic signals, signal lights, robots or semaphore, are signalling devices positioned at road intersections, pedestrian crossings and other locations to control competing flows of traffic...
s, which crosses over the Kent Coast railway line
Kent Coast Line
The Kent Coast Line is railway line that runs from Dover Priory to Margate in the English county of Kent.It was electrified by BR under the 1955 Modernisation Plan.- Services :...
. Visitor facilities are provided including car parking, toilets and a cafe.

The new name for this new part of the United Kingdom was coined by Mrs Gillian Janaway, a retired English teacher from Dover, by way of a public competition. The name refers to Rock Samphire
Rock samphire
Samphire or rock samphire, Crithmum maritimum, is the sole species of the genus Crithmum. It is an edible wild plant found on southern and western coasts of Britain and Ireland, on mediterranean and western coasts of Europe including the Canary Islands, North Africa and the Black Sea...
, a plant which used to be collected from neighbouring cliffs, and a 'hoe', meaning a spur of land.

The ecology of Samphire Hoe is very special and what is now chalk meadow-land is home to a number of nationally rare plant species including the Early Spider Orchid
Ophrys sphegodes
Ophrys sphegodes, commonly known as the Early Spider Orchid, is a species of orchid found on alkaline meadows and waste land. It has a distribution that includes western and northern Europe extending to parts of southern England but may also be found as far east as Corfu and possibly also in...
.