Encyclopedia
was a Japan
Japanese people
The are an ethnic group originating in the Japanese archipelago and are the predominant ethnic group of Japan. Worldwide, approximately 130 million people are of Japanese descent; of these, approximately 127 million are residents of Japan. People of Japanese ancestry who live in other countries...
ese career diplomat
Diplomat
A diplomat is a person appointed by a state to conduct diplomacy with another state or international organization. The main functions of diplomats revolve around the representation and protection of the interests and nationals of the sending state, as well as the promotion of information and...
. He is remembered now as an envoy who tried to negotiate peace and understanding with the United States
United States
The United States of America is a federal constitutional republic comprising fifty states and a federal district...
while Japan was secretly preparing the attack on Pearl Harbor
Attack on Pearl Harbor
The attack on Pearl Harbor was a surprise military strike conducted by the Imperial Japanese Navy against the United States naval base at Pearl Harbor, Hawaii, on the morning of December 7, 1941...
.

As Imperial Japan's ambassador to Germany
Germany
Germany , officially the Federal Republic of Germany , is a federal parliamentary republic in Europe. The country consists of 16 states while the capital and largest city is Berlin. Germany covers an area of 357,021 km2 and has a largely temperate seasonal climate...
from 1939 to November 1941, he signed the Tripartite Pact
Tripartite Pact
The Tripartite Pact, also the Three-Power Pact, Axis Pact, Three-way Pact or Tripartite Treaty was a pact signed in Berlin, Germany on September 27, 1940, which established the Axis Powers of World War II...
along with the foreign ministers of Nazi Germany
Nazi Germany
Nazi Germany , also known as the Third Reich , but officially called German Reich from 1933 to 1943 and Greater German Reich from 26 June 1943 onward, is the name commonly used to refer to the state of Germany from 1933 to 1945, when it was a totalitarian dictatorship ruled by...
and Fascist Italy
Kingdom of Italy (1861–1946)
The Kingdom of Italy was a state forged in 1861 by the unification of Italy under the influence of the Kingdom of Sardinia, which was its legal predecessor state...
on September 27, 1940.

Kurusu was born in Kanagawa Prefecture
Kanagawa Prefecture
is a prefecture located in the southern Kantō region of Japan. The capital is Yokohama. Kanagawa is part of the Greater Tokyo Area.-History:The prefecture has some archaeological sites going back to the Jōmon period...
in 1883. He graduated from Tokyo Commercial College (now Hitotsubashi University
Hitotsubashi University
is a national university specialised in the social sciences in Tokyo, Japan. The University has campuses in Kunitachi, Kodaira, and Kanda.Hitotsubashi is considered as one of the most prestigious universities in Japan. It is ranked 25th in the world in 2011 by École des Mines de Paris.Hitotsubashi...
) in 1909. The following year, he entered diplomatic service and, in 1914, first came to the United States as the Japanese Consul in Chicago. During his six-year service in Chicago, Kurusu married Alice Jay Little. He had three children, a son Ryo, and a daughter Jaye were both born in the United States; another daughter, Teruko Pia, was born in Italy in 1926. Both daughters married Americans and moved back to the United States. The only son, Captain Ryo Kurusu was killed in a freak accident in 1945. Kurusu did not have any other son, although an American newspaper erroneously reported "his son, Captain Makoto "Norman" Kurusu, was killed in a dogfight over Chiba." After Saburo's death, Alice Kurusu adopted a girl.

Early foreign service experience included posts in Chile, Italy, Germany and Peru. As Japanese Consul in Lima, Peru in 1930, he sought to defuse anti-Japanese violence by promoting Japanese immigrant settlements in the rural highlands rather than in urban Lima. Kurusu was promoted to director of the Foreign Office Commerce Bureau to negotiate trade agreements. In 1937, he was made ambassador to Belgium, and two years later the ambassador to Germany. On September 27, 1940, Kurusu signed the Tripartite Pact in Berlin on behalf of the Japanese Empire, entering into a 10-year military and economic treaty between Germany, Italy and Japan. 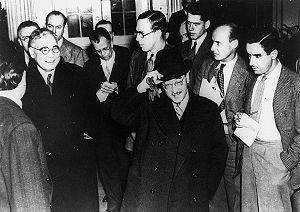 After peace talks between the United States and Japan bogged down in 1941, Kurusu was dispatched as the Imperial government's "special envoy". Arriving in Washington on November 15, Kurusu told newsmen "I am indeed glad to be here in your nation's capital. I extend greetings to all from the bottom of my heart." Two days later, Secretary of State Cordell Hull
Cordell Hull
Cordell Hull was an American politician from the U.S. state of Tennessee. He is best known as the longest-serving Secretary of State, holding the position for 11 years in the administration of President Franklin Delano Roosevelt during much of World War II...
brought Kurusu to the White House to meet with President Roosevelt. On November 20, Kurusu presented Japan's proposal that the United States cease aid to China and resume trade relations that had been frozen in December 1939. On November 26, Hull conveyed President Roosevelt's demands for Japan to withdraw its troops from China and to sever its Axis ties with Germany and Italy as a condition for peace. Kurusu reviewed the demand and replied, "If this is the attitude of the American government, I don't see how an agreement is possible. Tokyo will throw up its hands at this."

Over the next three weeks, Kurusu and Ambassador Kichisaburō Nomura
Kichisaburō Nomura
-External links:...
continued to confer with Hull while awaiting Japan's reply. On the afternoon of December 7 Kurusu delivered Japan's reply, breaking relations and closing with the statement that "The immutable policy of Japan is to promote world peace." At that moment, the bombing of Pearl Harbor had commenced. Unaware of what was happening, news reporters questioned Kurusu and Nomura as they left Hull's office. "Is this your last conference?" one asked, and an unsmiling Nomura had no answer. "Will the embassy issue a statement later?" asked another, and Kurusu replied, "I don't know."
In addressing Congress the next day, President Roosevelt said, "Indeed, one hour after Japanese squadrons had commenced bombing in Oahu, the Japanese ambassador to the United States and his colleague delivered to the Secretary of State a formal reply to a recent American message."

After the bombing of Pearl Harbor, Kurusu was interned in the United States at Hot Springs, Virginia
Hot Springs, Virginia
Hot Springs is a census-designated place in Bath County, Virginia, United States. The population as of the 2010 Census was 738. It is located about 5 miles southwest of Warm Springs on U.S. Route 220. Hot Springs is the site of a number of resorts that make use of the springs.The area is...
, until the United States and Japan negotiated an exchange of their diplomatic personnel and citizens. In June 1942, Kurusu sailed to Mozambique on board the ocean liner MS Gripsholm
MS Gripsholm
MS Gripsholm may refer to one of these passenger ships:, an ocean liner operated by the Swedish American Line, 1925–1954, a combined ocean liner/cruise ship operated by the Swedish American Line, 1957–1975, a cruise ship operated by Transocean Tours 1996–1997...
, which then brought back American ambassador to Japan Joseph Grew
Joseph Grew
Joseph Clark Grew was a United States diplomat and career foreign service officer. He was the chargé d'affaires at the U.S. embassy in Vienna when Austria-Hungary severed diplomatic relations with the United States on April 9, 1917. Later he was the U.S. Ambassador to Denmark 1920–1921 and U.S....
and other Americans who had been interned in Japan. Following the Allied victory in Japan, the American military tribunal elected in February, 1946, not to prosecute either Kurusu or Nomura. Kurusu was a visiting professor at Tokyo University and lived at a country estate in Karuizawa with his wife Alice. Like Nomura, Kurusu maintained for the rest of his life that he had been unaware of the plans for Pearl Harbor. "It must seem absurd to you," he told Frank Robertson of INS
International News Service
International News Service was a U.S.-based news agency founded by newspaper publisher William Randolph Hearst in 1909.Established two years after the Scripps family founded the United Press Association, INS scrapped among the newswires...
, "but it's true. The militarists kept their secret extremely well." He died at the age of 68.