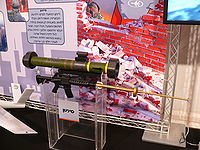 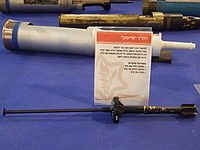 The SIMON is a rifle grenade
Rifle grenade
A rifle grenade is a grenade that uses a rifle-based launcher to permit a longer effective range than would be possible if the grenade was thrown by hand...
designed to breach through doors, developed by Rafael Advanced Defense Systems. It is intended for use with 5.56 mm rifle
Rifle
A rifle is a firearm designed to be fired from the shoulder, with a barrel that has a helical groove or pattern of grooves cut into the barrel walls. The raised areas of the rifling are called "lands," which make contact with the projectile , imparting spin around an axis corresponding to the...
s such as the M4 carbine
M4 carbine
The M4 carbine is a family of firearms tracing its lineage back to earlier carbine versions of the M16, all based on the original AR-15 designed by Eugene Stoner and made by ArmaLite. It is a shorter and lighter variant of the M16A2 assault rifle, with 80% parts commonality.It is a gas-operated,...
.

The system consists of a bullet-trap tail section which slides over the muzzle
Muzzle (firearm)
The muzzle of a firearm is the end of the barrel from which the projectile will exit.Precise machining of the muzzle is crucial to accuracy, because it is the last point of contact between the barrel and the projectile...
of the rifle, an explosive mid-section and a front standoff rod. The grenade is propelled by a normal ball or tracer round
Tracer ammunition
Tracer ammunition are bullets that are built with a small pyrotechnic charge in their base. Ignited by the burning powder, the phosphorus tail burns very brightly, making the projectile visible to the naked eye...
to a maximum range of 30 meters and is detonated
Detonation
Detonation involves a supersonic exothermic front accelerating through a medium that eventually drives a shock front propagating directly in front of it. Detonations are observed in both conventional solid and liquid explosives, as well as in reactive gases...
by the impact of the standoff rod against the door to be breached, the standoff distance allowing the blast wave
Blast wave
A blast wave in fluid dynamics is the pressure and flow resulting from the deposition of a large amount of energy in a small very localised volume. The flow field can be approximated as a lead shock wave, followed by a 'self-similar' subsonic flow field. In simpler terms, a blast wave is an area of...
to affect as much of the door surface as possible, negating any need to aim for hinges or locks.

A version which is manually attached to the door is also available, known as "static SIMON".

- A variant of the SIMON 120 is in service with the U.S. Army as the M100 Grenade Rifle Entry Munition (GREM). Changes from the original specification involved fuzing and reliability issues. An inert round, the M101 GREM-Target Practice (GREM-TP) allows training for accuracy without the explosive hazard. The system was given a U.S. Army award as one of the top 10 best inventions of 2005.