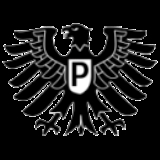 Encyclopedia
SC Preußen Münster are a German association football club
Football in Germany
Association football is the most popular sport in Germany. The German Football Association is the sport's national governing body, with 6.6 million members organized in over 26,000 football clubs. There is a league system, with the 1. and 2. Bundesliga on top, and the winner of the first...
based in Münster
Münster
Münster is an independent city in North Rhine-Westphalia, Germany. It is located in the northern part of the state and is considered to be the cultural centre of the Westphalia region. It is also capital of the local government region Münsterland...
, North Rhine-Westphalia
North Rhine-Westphalia
North Rhine-Westphalia is the most populous state of Germany, with four of the country's ten largest cities. The state was formed in 1946 as a merger of the northern Rhineland and Westphalia, both formerly part of Prussia. Its capital is Düsseldorf. The state is currently run by a coalition of the...
.

The club was founded as FC Preussen in 1906 and has its roots in a group formed at the Johann-Conrad-Schlaun Grammar School. In 1921 the team took on their current name, and progressed to second division competition in 1928.

In 1933, Preußen advanced to the Gauliga Westfalen
Gauliga Westfalen
The Gauliga Westphalia was the highest football league in the Prussian province of Westphalia and the small Free State of Lippe from 1933 to 1945...
, one of sixteen top-flight leagues established through the re-organization of German football under the Third Reich. They earned only mediocre results there and were relegated twice. Their second demotion in 1941 left them out of first division football until after World War II.

The team played three seasons in the Landesliga Westfalen Gr. 2 (II) before returning to the top-flight in the Oberliga West in the 1948–49 season. That arrival was accompanied by some notoriety as Preußen Münster became the first German football club to build a team by buying players, something previously unheard of in a country committed to the ideal of amateurism. Siegfried Rachuba, Adolf Preissler, Rudolf Schulz, Felix Gerritzen, and Josef Lammers formed a front five dubbed by the press as the "Hundred-Thousand-Mark Line", even though that much money never did change hands.


Founding member of the Bundesliga

Their results as a mid-table side in the tough Oberliga West in the ten years prior to the formation of the Bundesliga in 1963 were good enough to earn them admission as one of the five teams from that league to earn a place in Germany's new sixteen-team professional circuit. The club made only a cameo appearance in the Bundesliga, being relegated after a next-to-last 15th place finish.

Preußen Münster played out the 1960s and 1970s as a second division side in the Regionalliga West and 2. Bundesliga Nord. They slipped to the Amateur Oberliga Westfalen (III) in the 1981–82 season, and except for a short adventure in the 2. Bundesliga in the 1990 and 1991 seasons, have since played third tier football in the Regionalliga West/Sudwest (1993–2000) and Regionalliga Nord (2000–2006). During this period, they captured the German Amateur Championship in 1994 with a 1:0 win over Kickers Offenbach
Kickers Offenbach
Kickers Offenbach is a German association football club in Offenbach am Main, Hesse. The club was founded on 27 May 1901 in the Rheinischer Hof restaurant by footballers who had left established local clubs including Melitia, Teutonia, Viktoria, Germania and Neptun...
.

In 2006, the club once slipped to the Oberliga Westfalen, now a fourth tier circuit. Management subsequently invested significant financial resources into a high-profile team of experienced second- and third-tier players in pursuit of immediate re-promotion. The attempt ended in failure and the club re-built itself with young players in place of expensive veterans and also put in place a young and relatively unknown coach, Roger Schmidt. The re-worked side finished first place in the 2007 / 2008 season, and so qualified for the new Regionalliga West (IV). They finished Regionalliga as 4th in 2008–2009 and as 6th in 2009–10 seasons. They finally promoted to 3rd Liga after finishing champion of West Group of Regionalliga in 2010-11 season.

The club play in the Preußenstadion, built in 1923, which has a capacity of 15,050 spectators (~1,560 seats). The construction of a new facility was considered in the 80's, but the idea was abandoned in December 2000. In spring 2008 it was decided to run reconstructions to make the stadium more attractive and fitting to modern standards. The seats area will be replaced by a new one including 2931 seats and VIP lounges. The terraces which still are uncovered will get a roof. The demolition of the seats area has begun in November 2008. The works are planned to be finished end of February 2009.