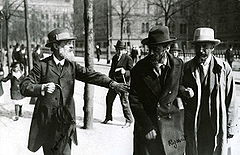 After the 1912 split, the General Jewish Labour Bund in Lithuania, Poland and Russia became a federated part of the Russian Social Democratic Labour Party (Menshevik) (by this time the Mensheviks had accepted the idea of a federated party organization).

At the 1917 congress of the Russian Social Democratic Labour Party (Menshevik) a party Central Committee
Central Committee
Central Committee was the common designation of a standing administrative body of communist parties, analogous to a board of directors, whether ruling or non-ruling in the twentieth century and of the surviving, mostly Trotskyist, states in the early twenty first. In such party organizations the...
was elected, consisting of Raphael Abramovich, I. Akhmatov, I. Astrov, Pavel Axelrod
Pavel Axelrod
Pavel Borisovich Axelrod was a Russian Menshevik.- Early life and career :Born Pinches Borutsch in Potscheff near Chernigov and raised to Shklov, a small provincial town in and Mogilev, the biggest town of the three in the Russian Empire , Axelrod was the son of a Jewish innkeeper.In 1875 in...
, B. Gurevich, E. Broido, F. Lipkin, Fyodor Dan, Henryk Ehrlich
Henryk Ehrlich
Henryk Ehrlich was an activist of the Russian Social Democratic Labour Party , member of the Petrograd Soviet, Warsaw City Council and member of the executive committee of the Second International...
, V. Ezhov, K. G. Gogua, B. Gorev, Ivan Maisky, Julius Martov
Julius Martov
Julius Martov or L. Martov was born in Constantinople in 1873...
, Alexander Martinov
Alexander Martinov
Alexander Martinov was a Menshevik before the Russian revolutions of 1917, and for a few years after the revolution an opponent of the Soviet government....
, A. Frumson, Pinkevich, S. Semkovskii and I. Volkov


After the October Revolution

After the October Revolution, differences emerged inside the party. In 1921 the party issued the 'Platform of the Russian Social Democratic Labour Party', calling for liquidating the political monopoly of the Communist Party, which was identified as something quite different from the dictatorship of the proletariat
Dictatorship of the proletariat
In Marxist socio-political thought, the dictatorship of the proletariat refers to a socialist state in which the proletariat, or the working class, have control of political power. The term, coined by Joseph Weydemeyer, was adopted by the founders of Marxism, Karl Marx and Friedrich Engels, in the...
, privatizations of large sectors of industry and giving full voting rights to the peasantry and those treated by the Soviet government as the bourgeois class. From the beginning of 1921, after the suppression of the Kronstadt garrison revolt, the 10th Communist Party congress and the introduction of the NEP and ending of forcible confiscation of grain from the peasantry, the Russian Social Democratic Labour Party was forced to operate underground in the Soviet Russia and Soviet Union, and openly only in exile in Europe and North America. The Foreign Delegation of the party had been established in 1920, and was at first located in Berlin
Berlin
Berlin is the capital city of Germany and is one of the 16 states of Germany. With a population of 3.45 million people, Berlin is Germany's largest city. It is the second most populous city proper and the seventh most populous urban area in the European Union...
(until 1933), then shifted to Paris
Paris
Paris is the capital and largest city in France, situated on the river Seine, in northern France, at the heart of the Île-de-France region...
and in 1940 moved to New York
New York
New York is a state in the Northeastern region of the United States. It is the nation's third most populous state. New York is bordered by New Jersey and Pennsylvania to the south, and by Connecticut, Massachusetts and Vermont to the east...
. In exile the party consisted of small groups in Geneva
Geneva
Geneva In the national languages of Switzerland the city is known as Genf , Ginevra and Genevra is the second-most-populous city in Switzerland and is the most populous city of Romandie, the French-speaking part of Switzerland...
, Liège
Liège
Liège is a major city and municipality of Belgium located in the province of Liège, of which it is the economic capital, in Wallonia, the French-speaking region of Belgium....
, Berlin, Paris, Bern and (later) New York.

The party published Sotsialisticheskii vestnik (Socialist Courier) from 1921-1965, from February 1, 1921 to 1933 in Berlin, then in Paris until 1940 and in New York from then until 1965.
The source of this article is wikipedia, the free encyclopedia.  The text of this article is licensed under the GFDL.