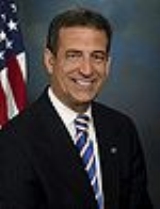 He is a recipient of the John F. Kennedy Profile in Courage Award
Profile in Courage Award
The Profile in Courage Award is a private award given to recognize displays of courage similar to those John F. Kennedy described in his book Profiles in Courage...
, and cosponsored the Bipartisan Campaign Reform Act
Bipartisan Campaign Reform Act
The Bipartisan Campaign Reform Act of 2002 is a United States federal law that amended the Federal Election Campaign Act of 1971, which regulates the financing of political campaigns. Its chief sponsors were Senators Russell Feingold and John McCain...
(McCain–Feingold Act), a major piece of campaign finance reform
Campaign finance reform
Campaign finance reform is the common term for the political effort in the United States to change the involvement of money in politics, primarily in political campaigns....
legislation. He was the only Senator to vote against the USA PATRIOT Act
USA PATRIOT Act
The USA PATRIOT Act is an Act of the U.S. Congress that was signed into law by President George W. Bush on October 26, 2001...
during the first vote on the legislation.