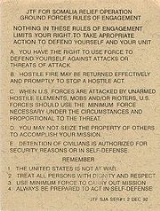 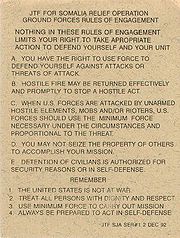 Rules of Engagement (ROE) refers to those responses that are permitted in the employment of military
Military
A military is an organization authorized by its greater society to use lethal force, usually including use of weapons, in defending its country by combating actual or perceived threats. The military may have additional functions of use to its greater society, such as advancing a political agenda e.g...
personnel during operations or in the course of their duties. These rules of engagement are determined by the legal framework within which these duties are being carried out. Such rules may be general or specific, and there have been large variations between cultures throughout history. Rules of Engagement would frequently be classified in order to reduce the risk to the military to whom they apply however some elements may be made known in some circumstances.

Rules of Engagement provide those who provide political direction to military operations with a degree of confidence that the actions of military personnel are conducted within a legally defensible framework. It provides commanders and personnel with a clearly delineated set of responsibilities and operational constraints.

Within this the RoE dictates where, when and against whom military force may be used what forms of military activity are appropriate and acceptable and what evidence is required to support an action decision. RoE would not normally dictate how a result is to be achieved but will indicate what measures may be unacceptable.

An abbreviated description of how the RoE can be applied may be issued to all personnel to provide a reference during the performance of their duties.
The source of this article is wikipedia, the free encyclopedia.  The text of this article is licensed under the GFDL.