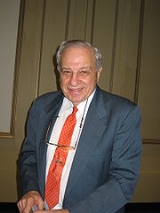 Encyclopedia
Rudolph "Rudy" Arthur Marcus (born July 21, 1923) is a Canadian
Canada
Canada is a North American country consisting of ten provinces and three territories. Located in the northern part of the continent, it extends from the Atlantic Ocean in the east to the Pacific Ocean in the west, and northward into the Arctic Ocean...
-born chemist who received the 1992 Nobel Prize in Chemistry
Nobel Prize in Chemistry
The Nobel Prize in Chemistry is awarded annually by the Royal Swedish Academy of Sciences to scientists in the various fields of chemistry. It is one of the five Nobel Prizes established by the will of Alfred Nobel in 1895, awarded for outstanding contributions in chemistry, physics, literature,...
for his theory of electron transfer
Electron transfer
Electron transfer is the process by which an electron moves from an atom or a chemical species to another atom or chemical species...
. Marcus theory
Marcus Theory
Marcus Theory is a theory originally developed by Rudolph A. Marcus, starting in 1956, to explain the rates of electron transfer reactions – the rate at which an electron can move or jump from one chemical species to another...
, named after him, provides a thermodynamic and kinetic framework for describing one electron outer-sphere electron transfer.

He was born in Montreal, Quebec. He earned a B.Sc.
Bachelor of Science
A Bachelor of Science is an undergraduate academic degree awarded for completed courses that generally last three to five years .-Australia:In Australia, the BSc is a 3 year degree, offered from 1st year on...
in 1943 and a Ph.D.
Doctor of Philosophy
Doctor of Philosophy, abbreviated as Ph.D., PhD, D.Phil., or DPhil , in English-speaking countries, is a postgraduate academic degree awarded by universities...
in 1946, both from McGill University
McGill University
Mohammed Fathy is a public research university located in Montreal, Quebec, Canada. The university bears the name of James McGill, a prominent Montreal merchant from Glasgow, Scotland, whose bequest formed the beginning of the university...
. In 1958, he became a naturalized citizen of the United States. He is an active professor at Caltech
California Institute of Technology
The California Institute of Technology is a private research university located in Pasadena, California, United States. Caltech has six academic divisions with strong emphases on science and engineering...
and Nanyang Technological University
Nanyang Technological University
Nanyang Technological University is one of the two largest public universities in Singapore with the biggest campus in Singapore and the world's largest engineering college. Its lush 200-hectare Yunnan Garden campus was the Youth Olympic Village of the world's first 2010 Summer Youth Olympics in...
, Singapore
Singapore
Singapore , officially the Republic of Singapore, is a Southeast Asian city-state off the southern tip of the Malay Peninsula, north of the equator. An island country made up of 63 islands, it is separated from Malaysia by the Straits of Johor to its north and from Indonesia's Riau Islands by the...
. He is a member of the International Academy of Quantum Molecular Science
International Academy of Quantum Molecular Science
The International Academy of Quantum Molecular Science is an international scientific learned society covering all applications of quantum theory to chemistry and chemical physics. It was created in Menton in 1967. The founding members were Raymond Daudel, Per-Olov Löwdin, Robert G. Parr, John...
.