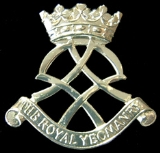 Encyclopedia
The Royal Yeomanry is an armoured
Armoured warfare
Armoured warfare or tank warfare is the use of armoured fighting vehicles in modern warfare. It is a major component of modern methods of war....
regiment
Regiment
A regiment is a major tactical military unit, composed of variable numbers of batteries, squadrons or battalions, commanded by a colonel or lieutenant colonel...
of the Territorial Army consisting of five squadrons and a military band:

The Royal Yeomanry's role is to provide chemical, biological, radiological, and nuclear (CBRN) reconnaissance as part of the British Army's combat arm.

The Royal Yeomanry was formed in 1967, following the amalgamation of six distinguished county yeomanry
Yeomanry
Yeomanry is a designation used by a number of units or sub-units of the British Territorial Army, descended from volunteer cavalry regiments. Today, Yeomanry units may serve in a variety of different military roles.-History:...
regiments, as a medium reconnaissance regiment equipped with armoured cars. It continued in this role until 1996, when it became the British Army's
British Army
The British Army is the land warfare branch of Her Majesty's Armed Forces in the United Kingdom. It came into being with the unification of the Kingdom of England and Scotland into the Kingdom of Great Britain in 1707. The new British Army incorporated Regiments that had already existed in England...
NBC defence regiment. It served exclusively in this role until 1999, when the Joint NBC Regiment was formed. Two of the Royal Yeomanry's squadrons, A Squadron and the W Squadron, were retained in the NBC role to provide reserves for front line NBC troops. The remaining three converted to the Challenger 2
Challenger 2 tank
FV4034 Challenger 2 is a British main battle tank currently in service with the armies of the United Kingdom and Oman. It was designed and built by the British company Vickers Defence Systems . The manufacturer advertises it as the world's most reliable main battle tank...
to serve as reserves for armoured regiments.

Under the restructuring of the Territorial Army announced in March 2006, all five squadrons of the Royal Yeomanry have adopted the role of formation CBRN reconnaissance and the regiment's established strength has increased to 561 personnel. 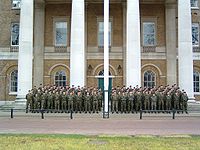 Members of the Royal Yeomanry have served as individual replacements on operations in Kuwait and the Former Yugoslavia. The regiment's most significant deployments have been to Iraq.

In January 2003, W Squadron and A Squadron were mobilised for Operation TELIC
Operation Telic
Operation TELIC was the codename under which all British military operations in Iraq were conducted between the start of the Invasion of Iraq on 19 March 2003 and the withdrawal of the last remaining British forces on 22 May 2011...
, the war in Iraq. The two squadrons were amalgamated with a number of augmentees from the other three squadrons and from the Royal Logistic Corps
Royal Logistic Corps
The Royal Logistic Corps provides logistic support functions to the British Army. It is the largest Corps in the Army, comprising around 17% of its strength...
to form a much-enlarged "Y" Squadron of the Joint NBC Regiment.

This was the first deployment of a formed TA unit (TA soldiers under TA command) for combat operations since the Suez crisis
Suez Crisis
The Suez Crisis, also referred to as the Tripartite Aggression, Suez War was an offensive war fought by France, the United Kingdom, and Israel against Egypt beginning on 29 October 1956. Less than a day after Israel invaded Egypt, Britain and France issued a joint ultimatum to Egypt and Israel,...
in 1956. During the war, officers and soldiers of the Royal Yeomanry found themselves serving with 16 Air Assault Brigade, 7 Armoured Brigade (the Desert Rats) and 3 Commando Brigade
3 Commando Brigade
3 Commando Brigade is a commando formation of the British Armed Forces and the main manoeuvre formation of the Royal Marines. Its personnel are predominantly Royal Marines, supported by units of Royal Engineers, Royal Artillery, The Rifles, and the Fleet Air Arm, together with other Commando...
as NBC specialists, before switching roles to infantry “peace support” operations once Saddam Hussein’s regime had collapsed.

The Royal Yeomanry has maintained a constant presence in Iraq since March 2003. The regiment's soldiers have been mobilised for each of the subsequent TELICs. Of these, the largest deployment was for TELIC 4 in 2004, when soldiers and officers from B, C and S Squadrons were despatched to augment the Queen's Royal Lancers and 1st Battalion the Princess of Wales' Royal Regiment, serving principally as infantry but also in the armoured role. Since 2007, the Royal Yeomanry has provided officers and soldiers as individual replacements on Operation HERRICK
Operation Herrick
Operation Herrick is the codename under which all British operations in the war in Afghanistan have been conducted since 2002. It consists of the British contribution to the NATO-led International Security Assistance Force and support to the US-led Operation Enduring Freedom...
in Afghanistan.

As a result of the regiment's initial service during the Iraq war, the Royal Yeomanry was in 2005 awarded the theatre honour "Iraq 2003", the first battle honour the regiment has won since its formation, and the first - so far the only - battle honour awarded to a Territorial Army regiment since the Second World War.

The squadrons forming the Royal Yeomanry also hold a large number of battle honours won by their predecessor regiments and retain the right to parade their respective guidon
Colours, standards and guidons
In military organizations, the practice of carrying colours, standards or Guidons, both to act as a rallying point for troops and to mark the location of the commander, is thought to have originated in Ancient Egypt some 5,000 years ago...
.