Encyclopedia
Rotherbaum is a quarter of Eimsbüttel
Eimsbüttel
Eimsbüttel is one of the seven boroughs of Hamburg, Germany. In 2006 the population was 246,087.-History:On March 1, 2008 Eimsbüttel lost a part of its area to form the quarter Sternschanze in the borough Altona.-Geography:...
, a borough of Hamburg
Hamburg
-History:The first historic name for the city was, according to Claudius Ptolemy's reports, Treva.But the city takes its modern name, Hamburg, from the first permanent building on the site, a castle whose construction was ordered by the Emperor Charlemagne in AD 808...
, Germany
Germany
Germany , officially the Federal Republic of Germany , is a federal parliamentary republic in Europe. The country consists of 16 states while the capital and largest city is Berlin. Germany covers an area of 357,021 km2 and has a largely temperate seasonal climate...
. In 2006 the population was 16,853.

In German
German language
German is a West Germanic language, related to and classified alongside English and Dutch. With an estimated 90 – 98 million native speakers, German is one of the world's major languages and is the most widely-spoken first language in the European Union....
, "roter Baum" means red tree. The "th", which in general was abolished in the spelling reform of 1900, was preserved in names. Depending on grammatical context, it might also be spelled with n as Rothenbaum.

Since 1800, distinguished and rich Hamburg citizens built the mansions at the bank of the Außenalster
Außenalster
Außenalster or Outer Alster Lake is one of two artificial lakes within the city limits of Hamburg, Germany, which are formed by the river Alster . The size of the Außenalster is 1.6 km²....
lake, to move from the city to a better surrounding area. An example is the building at Alsterufer street #27, built by Martin Haller
Martin Haller
Martin Emil Ferdinand Haller was a German architect, who designed the Hamburg Rathaus and the building of the Consulate General of the United States in Hamburg, and a member of the Hamburg Parliament.- Early life and family :...
—the architect of the Hamburg Rathaus
Hamburg Rathaus
The Hamburg Rathaus is the Rathaus—the city hall or town hall—of Hamburg, Germany, it is the seat of the government of Hamburg, located in the Altstadt quarter in the city centre, near the lake Binnenalster and the central station...
—the building was later owned by Anton Riedemann, the founder of Deutsch-Amerikanischen Petroleum-Gesellschaft; later Esso
Esso
Esso is an international trade name for ExxonMobil and its related companies. Pronounced , it is derived from the initials of the pre-1911 Standard Oil, and as such became the focus of much litigation and regulatory restriction in the United States. In 1972, it was largely replaced in the U.S. by...
. As of 2009 the Consulate General of the United States in Hamburg
Consulate General of the United States in Hamburg
The Consulate General of the United States of America in Hamburg is a diplomatic mission representing the United States of America to the city of Hamburg and the land of Schleswig Holstein in the Federal Republic of Germany. The Government of Hamburg counts the promotion of the then Vice-Consul...
used the building.

From 1946 to 1948, war crime
War crimes of the Wehrmacht
War crimes of the Wehrmacht were those carried out by the German armed forces during World War II. While the principal perpetrators of the Holocaust amongst German armed forces were the Nazi German 'political' armies , the regular armed forces represented by the Wehrmacht committed war crimes of...
trials were held by the British Armed Forces
British Armed Forces
The British Armed Forces are the armed forces of the United Kingdom of Great Britain and Northern Ireland.Also known as Her Majesty's Armed Forces and sometimes legally the Armed Forces of the Crown, the British Armed Forces encompasses three professional uniformed services, the Royal Navy, the...
in the Curiohaus, an office building which is named after Johann Carl Daniel Curio. Located in Rotherbaum's Rothenbaumchaussee 15, it survived the bombing of Hamburg. Among others, subject of the Curiohaus processes were Fritz Knoechlein
Fritz Knoechlein
Fritz Knöchlein was an SS-Obersturmbannführer during the Second World War who was subsequently convicted and executed for war crimes.-Biography:Fritz Knöchlein joined the SS in 1934...
for the Le Paradis massacre
Le Paradis massacre
The Le Paradis massacre was a war crime committed by members of the 14th Company, SS Division Totenkopf, under the command of Hauptsturmführer Fritz Knöchlein...
, the SS-physician Alfred Trzebinski
Alfred Trzebinski
Alfred Trzebinski was an SS-physician at the Auschwitz, Majdanek and Neuengamme concentration camps in Nazi Germany. He was sentenced to death and executed for his involvement in war crimes committed at the Neuengamme subcamps.-Life:Trzebinski was born in Jutroschin, Province of Posen...
from the Neuengamme concentration camp
Neuengamme
The Neuengamme concentration camp, a Nazi concentration camp, was established in 1938 by the SS near the village of Neuengamme in Bergedorf district within the City of Hamburg, Germany. It was in operation from 1938 to 1945. By the end of the war, more than half of its estimated 106,000 prisoners...
, Hamburg's famous football player Otto Harder
Otto Harder
Otto Fritz Harder was a soccer player for the Hamburger SV. He won two German football championships and played 15 times in the German national team...
(sentenced to 15 years imprisonment) and the company Tesch & Stabenow
Tesch & Stabenow
The corporation Tesch & Stabenow was a market leader in pest control chemicals between 1924 and 1945 in Germany east of the Elbe....
which sold Zyklon B
Zyklon B
Zyklon B was the trade name of a cyanide-based pesticide infamous for its use by Nazi Germany to kill human beings in gas chambers of extermination camps during the Holocaust. The "B" designation indicates one of two types of Zyklon...
.

In 2006, according to the statistical office of Hamburg and Schleswig-Holstein, Rotherbaum has a total area of 2.9 km². In the North is the quarter Harvesterhude. The southern border of Rotherbaum to the quarters Neustadt, St. Pauli
St. Pauli
St. Pauli , located in the Hamburg-Mitte borough, is one of the 105 quarters of the city of Hamburg, Germany. Situated on the right bank of the Elbe river, the Landungsbrücken are a northern part of the port of Hamburg. St. Pauli contains a world famous red light district around the street Reeperbahn...
and Sternschanze is along the railway tracks of the city train
Hamburg S-Bahn
The Hamburg S-Bahn is a railway network for public rapid mass transit in the Hamburg Metropolitan Region. Together the S-Bahn, the Hamburg U-Bahn, the AKN railway and the regional railway form the backbone of railway public transport in the city and the surrounding area...
. In the West is the quarter Eimsbüttel
Eimsbüttel (quarter)
Eimsbüttel is one of the 105 quarters in the Eimsbüttel borough of Hamburg, Germany. In 2006 the population was 54,702.-History:On March 1, 2008 the Eimsbüttel quarter lost a part of its area to form the quarter Sternschanze in the borough Altona....
. In the East the lake Außenalster
Außenalster
Außenalster or Outer Alster Lake is one of two artificial lakes within the city limits of Hamburg, Germany, which are formed by the river Alster . The size of the Außenalster is 1.6 km²....
is the border to the quarter St. Georg
St. Georg, Hamburg
St. Georg is a central quarter in the borough Hamburg-Mitte of Hamburg, Germany. In 2006 the population was 10,551.-History:In 1410 the articles 17 and 18 of a contract between the Senate and the citizens were regulating the accommodation of the patients in the hospital St. Georg . This hospital...
.

In 2006, 16,853 inhabitants were living in Rotherbaum. The population density was 5842 PD/sqkm. 11.3% were children under the age of 18, and 13.7% were 65 years of age or older. 22.6% were immigrants. 503 people were registered as unemployed and 4,866 were employees subject to social insurance
Social insurance
Social insurance is any government-sponsored program with the following four characteristics:* the benefits, eligibility requirements and other aspects of the program are defined by statute;...
contributions.

The campuses of the University of Hamburg
University of Hamburg
The University of Hamburg is a university in Hamburg, Germany. It was founded on 28 March 1919 by Wilhelm Stern and others. It grew out of the previous Allgemeines Vorlesungswesen and the Kolonialinstitut as well as the Akademisches Gymnasium. There are around 38,000 students as of the start of...
and the University of Music and Drama of Hamburg
Hochschule für Musik und Theater Hamburg
The Hochschule für Musik und Theater Hamburg is one of the larger universities of music in Germany.It was founded 1950 as Staatliche Hochschule für Musik on the base of the former private acting school of Annemarie Marks-Rocke and Eduard Marks.Studies include various music types from church music...
are located in Rotherbaum. In 2006 there were also one elementary school, the Grundschule Turmweg, and one secondary school, the Sophie-Barat-Schule. The Talmud Tora Schule, which was established in 1805, closed in 1942, and re-opened in 2002, is located in Rotherbaum. Wilhelm-Gymnasium
Wilhelm-Gymnasium (Hamburg)
The Wilhelm-Gymnasium is a university preparatory school in Hamburg, Germany. It is one of Hamburgs oldest schools. It was founded in 1881 and called Neue Gelehrtenschule and soon became a rival of the Academic school of the Johanneum. In 1883 it was renamed Wilhelm Gymnasium to honour the...
was located in Rotherbaum from 1885 to 1945. 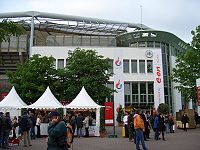 The main tennis court of the (former German Open) Hamburg Masters
Hamburg Masters
The German Open Hamburg, established in 1892, is an annual tennis tournament for male professional players held in Hamburg, Germany and part of the Association of Tennis Professionals Tour. Originally a Grand Prix Tennis Tour event between 1978 and 1989 it was part of the Grand Prix Championship...
tournament is located in the Am Rothenbaum
Am Rothenbaum
Am Rothenbaum is the site of the main tennis court of the Hamburg Masters tournament, played in the Rotherbaum quarter of Hamburg, Germany.Tennis has been played in Rotherbaum since 1927...
stadium.

The hockey club, Club an der Alster, has facilities in Rotherbaum.

Sportplatz at Rothenbaum
Sportplatz at Rothenbaum
Sportplatz am Rothenbaum was a multi-use stadium in Hamburg, Germany. It was used mostly for football matches and hosted the home matches of Hamburger SV. The stadium was able to hold 27,000 people and opened in 1910. It was eventually replaced by Volksparkstadion in 1963 and was closed for good in...
, which was opened in 1910, was the stadium used by Hamburger SV
Hamburger SV
Hamburger Sport-Verein, usually referred to as HSV in Germany and Hamburg in international parlance, is a German multi-sport club based in Hamburg, its largest branch being its football department...
and later by their amateur team and for promotion play-offs at the end of each season, until the stadium was demolished in 1994.

In Rotherbaum were 16 day-care centers for children, 142 physicians in private practice and 9 pharmacies.

Rotherbaum is serviced by the rapid transit
Rapid transit
A rapid transit, underground, subway, elevated railway, metro or metropolitan railway system is an electric passenger railway in an urban area with a high capacity and frequency, and grade separation from other traffic. Rapid transit systems are typically located either in underground tunnels or on...
system of the city train
Hamburg S-Bahn
The Hamburg S-Bahn is a railway network for public rapid mass transit in the Hamburg Metropolitan Region. Together the S-Bahn, the Hamburg U-Bahn, the AKN railway and the regional railway form the backbone of railway public transport in the city and the surrounding area...
with the stations Hamburg Dammtor
Hamburg Dammtor railway station
Hamburg Dammtor is a railway station for long distance, regional and public transport trains on the Hamburg-Altona link line. In front is a bus station of the same name for public transport in Hamburg, Germany....
, located in the homonymous place
Dammtor
Dammtor is a zone of the German city of Hamburg, situated between the quarters of Rotherbaum and Neustadt .-History:...
. Long distance trains are calling this station also. The Hamburg U-Bahn
Hamburg U-Bahn
The Hamburg U-Bahn is a rapid transit system serving the cities of Hamburg, Norderstedt and Ahrensburg in Germany. Although technically an underground, most of the system's track length is above ground. The network is interconnected with the city's S-Bahn system, which also has underground...
service the Hallerstraße station.

According to the Department of Motor Vehicles (Kraftfahrt-Bundesamt), in the quarter Rotherbaum were 5,446 private cars registered (324 cars/1000 people). There were 201 traffic accidents total, including 173 traffic accidents with damage to persons.