Encyclopedia
is the central railway station in the German
Germany
Germany , officially the Federal Republic of Germany , is a federal parliamentary republic in Europe. The country consists of 16 states while the capital and largest city is Berlin. Germany covers an area of 357,021 km2 and has a largely temperate seasonal climate...
city of Rostock
Rostock
Rostock -Early history:In the 11th century Polabian Slavs founded a settlement at the Warnow river called Roztoc ; the name Rostock is derived from that designation. The Danish king Valdemar I set the town aflame in 1161.Afterwards the place was settled by German traders...
. The station was first opened in 1886 by the Deutsch-Nordischer Lloyd, operating a combined railway/ferry line to Nykøbing
Nykøbing
Nykøbing means new city. It may refer to several towns:* Nykøbing Falster, on the island of Falster, Denmark* Nykøbing Mors, on the island of Mors, Denmark* Nykøbing Sjælland, on the island of Sjælland, Denmark* Nyköping Municipality and town in Sweden...
in Denmark. In 1894, the station was renamed to Central-Bahnhof and finally to Rostock Hauptbahnhof at the turn of the 20th century. The station saw further expansion in 1913 and 1922, but was heavily damaged in World War II
World War II
World War II, or the Second World War , was a global conflict lasting from 1939 to 1945, involving most of the world's nations—including all of the great powers—eventually forming two opposing military alliances: the Allies and the Axis...
. The importance of the classic connections to Hamburg and Copenhagen diminished after the German division, with long-distance services focusing on cities within the German Democratic Republic
German Democratic Republic
The German Democratic Republic , informally called East Germany by West Germany and other countries, was a socialist state established in 1949 in the Soviet zone of occupied Germany, including East Berlin of the Allied-occupied capital city...
instead. Electrification reached the station in 1985.

After German reunification, the station was extensively modernised. 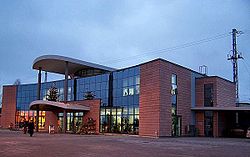 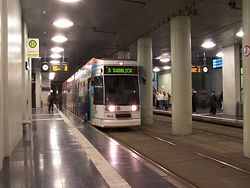