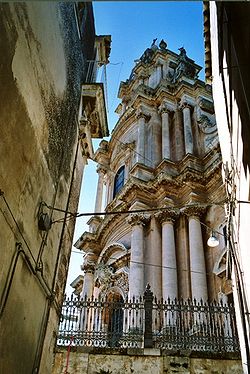 Rosario Gagliardi was a Sicilian
Sicily
Sicily is a region of Italy, and is the largest island in the Mediterranean Sea. Along with the surrounding minor islands, it constitutes an autonomous region of Italy, the Regione Autonoma Siciliana Sicily has a rich and unique culture, especially with regard to the arts, music, literature,...
architect
Architect
An architect is a person trained in the planning, design and oversight of the construction of buildings. To practice architecture means to offer or render services in connection with the design and construction of a building, or group of buildings and the space within the site surrounding the...
born in Syracuse
Syracuse, Italy
Syracuse is a historic city in Sicily, the capital of the province of Syracuse. The city is notable for its rich Greek history, culture, amphitheatres, architecture, and as the birthplace of the preeminent mathematician and engineer Archimedes. This 2,700-year-old city played a key role in...
. He was one of the leading architects working in the Sicilian Baroque
Sicilian Baroque
Sicilian Baroque is the distinctive form of Baroque architecture that took hold on the island of Sicily, off the southern coast of Italy, in the 17th and 18th centuries...
. In spite of never leaving Sicily his work showed great understanding of the style, but was a progression from the style of baroque
Baroque
The Baroque is a period and the style that used exaggerated motion and clear, easily interpreted detail to produce drama, tension, exuberance, and grandeur in sculpture, painting, literature, dance, and music...
as deployed by Bernini. He worked mostly in the Sicilian Baroque beginning with the cathedral at Modica in 1702.

When evaluating his work at San Giorgio in Modica, and the domed Basilica of San Giorgio in Ragusa
Ragusa, Italy
Ragusa is a city and comune in southern Italy. It is the capital of the province of Ragusa, on the island of Sicily, with around 75,000 inhabitants. It is built on a wide limestone hill between two deep valleys, Cava San Leonardo and Cava Santa Domenica...
(designed 1738, built 1744–66), it appears incredible that he was completely untravelled. As the Sicilian baroque style evolved so too did the accomplishment of his work. The Church of San Giorgio is thought to be the prototype for all the other churches in the region. Gagliardi was also responsible for numerous other churches and palazzi
Palazzo
Palazzo, an Italian word meaning a large building , may refer to:-Buildings:*Palazzo, an Italian type of building**Palazzo style architecture, imitative of Italian palazzi...
in Noto
Noto
Noto is a city and comune in the Province of Syracuse, Sicily . Its located 32 km southwest of the city of Syracuse at the foot of the Iblean Mountains and gives its name to the surrounding valley, Val di Noto...
and other places on the island.