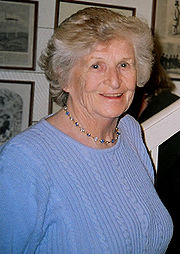 Ronnie Masterson is an Irish
Irish people
The Irish people are an ethnic group who originate in Ireland, an island in northwestern Europe. Ireland has been populated for around 9,000 years , with the Irish people's earliest ancestors recorded having legends of being descended from groups such as the Nemedians, Fomorians, Fir Bolg, Tuatha...
actress.

Masterson trained at the Abbey Theatre
Abbey Theatre
The Abbey Theatre , also known as the National Theatre of Ireland , is a theatre located in Dublin, Ireland. The Abbey first opened its doors to the public on 27 December 1904. Despite losing its original building to a fire in 1951, it has remained active to the present day...
and first appeared on stage there in 1944. At the Abbey, she met and then married actor Ray McAnally
Ray McAnally
Ray McAnally was an Irish actor famous for his performances in films such as The Mission, My Left Foot, and A Very British Coup.-Background:...
in 1945, and they remained married until his death, although they resided in different homes; her husband with Irish actress Britta Smith. McAnally and Masterson had four children, one of whom became a nun.

Masterson has also played in the Edinburgh International Festival
Edinburgh International Festival
The Edinburgh International Festival is a festival of performing arts that takes place in the city of Edinburgh, Scotland, over three weeks from around the middle of August. By invitation from the Festival Director, the International Festival brings top class performers of music , theatre, opera...
and in many Dublin Theatre Festival productions. She has appeared on many series broadcast on RTE
RTE
RTÉ is the abbreviation for Raidió Teilifís Éireann, the public broadcasting service of the Republic of Ireland.RTE may also refer to:* Recep Tayyip Erdoğan, 25th Prime Minister of Turkey...
, BBC
BBC
The British Broadcasting Corporation is a British public service broadcaster. Its headquarters is at Broadcasting House in the City of Westminster, London. It is the largest broadcaster in the world, with about 23,000 staff...
and ITV
ITV
ITV is the major commercial public service TV network in the United Kingdom. Launched in 1955 under the auspices of the Independent Television Authority to provide competition to the BBC, it is also the oldest commercial network in the UK...
and toured extensively in the United States
United States
The United States of America is a federal constitutional republic comprising fifty states and a federal district...
in her own one woman shows. She made her film debut in 1988
1988 in film
-Top grossing films :- Awards :Academy Awards:* Act of Piracy* Action Jackson, starring Carl Weathers, Craig T. Nelson, Vanity, Sharon Stone* The Adventures of Baron Munchausen* Akira* Alice...
, playing 'Bridie' in The Dawning
The Dawning
The Dawning is a 1988 British film, based on Jennifer Johnston's novel, The Old Jest which depicts the Irish War of Independence through the eyes of the Anglo-Irish landlord class...
.

In November 2005, she was in the U.S again, this time to take the lead role in The Sea Captain, a short film directed by her son, veteran television producer, Conor McAnally.