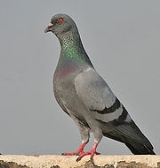 Overview
The Rock Dove or Rock Pigeon, is a member of the bird
Bird
Birds are feathered, winged, bipedal, endothermic , egg-laying, vertebrate animals. Around 10,000 living species and 188 families makes them the most speciose class of tetrapod vertebrates. They inhabit ecosystems across the globe, from the Arctic to the Antarctic. Extant birds range in size from...
family Columbidae (doves and pigeons). In common usage, this bird is often simply referred to as the "pigeon".
The species includes the domestic pigeon
Domestic Pigeon
The Domestic Pigeon was derived from the Rock Pigeon. The Rock Pigeon is the world's oldest domesticated bird. Mesopotamian cuneiform tablets mention the domestication of pigeons more than 5,000 years ago, as do Egyptian hieroglyphics.Research suggests that domestication of pigeons was as early as...
(including the fancy pigeon), and escaped domestic pigeons have given rise to feral populations
Feral Pigeon
Feral pigeons , also called city doves, flying rats, city pigeons or street pigeons, are derived from domestic pigeons that have returned to the wild. The domestic pigeon was originally bred from the wild Rock Pigeon, which naturally inhabits sea-cliffs and mountains. All three types readily...
around the world.

Wild Rock Doves are pale grey with two black bars on each wing, although domestic and feral
Feral
A feral organism is one that has changed from being domesticated to being wild or untamed. In the case of plants it is a movement from cultivated to uncultivated or controlled to volunteer. The introduction of feral animals or plants to their non-native regions, like any introduced species, may...
pigeons are very variable in colour and pattern.

where are rock pigeons located in Wisconsin?
More
x