A roadster is a two-seat open car with emphasis on sporty handling and without a fixed roof or side weather protection. Strictly speaking a roadster with wind-up windows is a convertible but as true roadsters are no longer made the distinction is now irrelevant. While roadsters usually have soft-tops, retractable hard-tops are becoming more common, which while they are not traditional roadsters, manufacturing companys are changing the definition to fit modern cars. The term "speedster" is closely related, and shares near identical terminology. However, it is normally reserved for cars which rely on very minimalist use of a windscreen, if at all, in addition to the altogether lack of any form of weather protection.

Traditionally, roadster bodies were widely available, spanning the gamut from a Ford Model T
Ford Model T
The Ford Model T is an automobile that was produced by Henry Ford's Ford Motor Company from September 1908 to May 1927...
to a Cadillac V-16. They are popular with collectors, often valued even higher than other open styles.

The American hot rod
Hot rod
Hot rods are typically American cars with large engines modified for linear speed. The origin of the term "hot rod" is unclear. One explanation is that the term is a contraction of "hot roadster," meaning a roadster that was modified for speed. Another possible origin includes modifications to or...
is largely based on pre-World War II
World War II
World War II, or the Second World War , was a global conflict lasting from 1939 to 1945, involving most of the world's nations—including all of the great powers—eventually forming two opposing military alliances: the Allies and the Axis...
roadsters and coupes. Late run Model Ts and 1932 Fords are the most popular starting points.

The term roadster was also applied to front-engined AAA/USAC Championship Cars, primarily associated with the Indianapolis 500
Indianapolis 500
The Indianapolis 500-Mile Race, also known as the Indianapolis 500, the 500 Miles at Indianapolis, the Indy 500 or The 500, is an American automobile race, held annually, typically on the last weekend in May at the Indianapolis Motor Speedway in Speedway, Indiana...
. Roadsters are cars with the engine and drive shaft offset from the centerline of the car. This allows the driver to be seated lower in the chassis and facilitates weight offset which is beneficial on the oval tracks. Frank Kurtis built the first roadster for the 1952 Indianapolis 500 and it was driven by Bill Vukovich who led most of the race until a steering failure eliminated him late in the race. The team went on to win the 1953 and 1954 contests with the same car. A. J. Watson and Quinn Epperly were other notable Roadster constructors. Roadsters disappeared from competition by the end of the 1960s, after the introduction, and subsequent domination, of rear-engined machines. The final roadster to make the race was built and driven by Jim Hurtubise in the 1968 race and dropped out early. Hurtubise attempted to run the same car in 1969 but while making his qualifying run at a very good speed the engine failed on the last of the four laps. The car was entered many times after that but was never seriously considered fast enough to start. Some pavement midgets were built and race into the early 1970s but never were dominant. 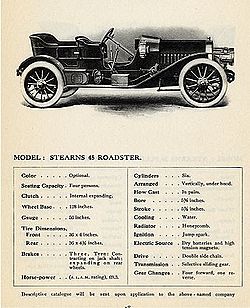 In the strictest sense the term "roadster" when applied to racing cars indicated a car where the driver's seat was beside the drive shaft, instead of over the drive shaft on the chassis centerline as it had been the custom on earlier single seat cars.

Many famous (road) races required a riding mechanic beside the driver.

The term originated with hot rods built from production cars which were popular in California racing following World War II. The commonly believed story is that a team was preparing a new car for Indianapolis and had it covered in a corner of their shop. If they were asked about their car they would try and obscure its importance by saying that it was just their (hot rod) "roadster". After the Indianapolis racer was made public the "roadster" name was still attached to it.