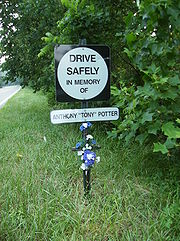 A roadside memorial is a marker that usually commemorates a site where a person died suddenly and unexpectedly, away from home. Unlike a grave site headstone, which marks where a body is laid, the memorial marks the last place on earth where a person was alive - although in the past travelers were of necessity often buried where they fell.

Usually the memorial is created and maintained by family members or friends of the person who died. A common type of memorial is simply a bunch of flowers, real or plastic, taped to street furniture
Street furniture
Street furniture is a collective term for objects and pieces of equipment installed on streets and roads for various purposes, including traffic barriers,...
or a tree trunk. A handwritten message, personal mementos etc. may be included. More sophisticated memorials may be a memorial cross
Memorial Cross
The Memorial Cross , often known as the Silver Cross, is a Canadian medal awarded to the mother, widow, widower, or next of kin of any member of the Canadian Forces who loses his or her life in active service, including peacekeeping, and other such international operations.-Design:The Memorial...
or a plaque with an inscription, decorated with flowers or wreaths.

Roadside memorials have been placed for centuries.

The origin of roadside crosses in the United States
United States
The United States of America is a federal constitutional republic comprising fifty states and a federal district...
has its roots with the early Hispanic settlers of the Southwestern United States, and are common in areas with large Hispanic populations. Formerly, in funerary processions where a group would proceed from a church to a graveyard carrying a coffin, the bearers would take a rest, or descanso in Spanish, and wherever they set the coffin down, a cross would be placed there in memory of the event. The modern practice of roadside shrines commemorate the last place a person was alive before receiving fatal injuries in a car crash, even if he should actually die in a hospital after the crash.

In the southwestern United States
Southwestern United States
The Southwestern United States is a region defined in different ways by different sources. Broad definitions include nearly a quarter of the United States, including Arizona, California, Colorado, Nevada, New Mexico, Oklahoma, Texas and Utah...
, they are also common at historic paraje
Paraje
Paraje, a Spanish term in use among English speakers in the southwestern United States, refers to a camping place along a long distance trail where travelers customarily stopped for the night. A paraje can be a town, a village or pueblo, a caravanserai, or simply a good location for stopping...
s on old long distance trails, going back to the roots of the tradition, and also marked the graves of people who died while traveling. A descanso memorial may be decorated especially for the holidays, and for significant anniversaries in the person's life. A descanso memorial for a child may be decorated with special toys, even toy vignettes of family life, and votive candles may be placed there on special nights.

The number of memorials erected in Australia
Australia
Australia , officially the Commonwealth of Australia, is a country in the Southern Hemisphere comprising the mainland of the Australian continent, the island of Tasmania, and numerous smaller islands in the Indian and Pacific Oceans. It is the world's sixth-largest country by total area...
since 1990 has increased considerably. In 2003, it was estimated that one in five road deaths were memorialized at the site of the crash.

In New Mexico, Department of Transportation crews undertaking new construction are not required to protect them, but usually either avoid altering them, or otherwise place them as close to where they originally were as possible once construction has been completed as a courtesy.

Apart from their personal significance, these memorials serve as a warning to other road users, as a general reminder of the dangers of driving, and by extension to encourage safer driving. In the 1940s and '50s
1950s
The 1950s or The Fifties was the decade that began on January 1, 1950 and ended on December 31, 1959. The decade was the sixth decade of the 20th century...
the Arizona
Arizona
Arizona ; is a state located in the southwestern region of the United States. It is also part of the western United States and the mountain west. The capital and largest city is Phoenix...
State Highway Patrol
Highway patrol
A highway patrol is either a police unit created primarily for the purpose of overseeing and enforcing traffic safety compliance on roads and highways, or a detail within an existing local or regional police agency that is primarily concerned with such duties.Duties of highway patrols or traffic...
began using white crosses to mark the site of fatal car accidents. This practice was continued by families of road-crash victims after it had been abandoned by the police. The ghost bike
Ghost bike
A ghost bike or ghostcycle is a bicycle set up as a roadside memorial in a place where a cyclist has been killed or severely injured...
phenomenon, where an old bicycle is painted white and locked up at an accident site, serves the same purpose in relation to cycling casualties.

Historically, roadside memorials were personal memorials, but there is a modern trend toward public memorials of increasingly large size.

The phenomenon of roadside memorials may be associated with another growing trend: public outpouring of grief for celebrities. The death of Diana, Princess of Wales
Diana, Princess of Wales
Diana, Princess of Wales was the first wife of Charles, Prince of Wales, whom she married on 29 July 1981, and an international charity and fundraising figure, as well as a preeminent celebrity of the late 20th century...
, for example, precipitated an avalanche of flowers and wreaths at the Pont de l'Alma
Pont de l'Alma
Pont de l'Alma is an arch bridge in Paris, crossing the Seine. It was named to commemorate the Battle of Alma during the Crimean War, in which the Franco-British alliance achieved victory over the Russian army on September 20, 1854....
road tunnel in Paris, the site of her death, and at Kensington Palace
Kensington Palace
Kensington Palace is a royal residence set in Kensington Gardens in the Royal Borough of Kensington and Chelsea in London, England. It has been a residence of the British Royal Family since the 17th century and is the official London residence of the Duke and Duchess of Cambridge, the Duke and...
, her home in London. While car-crash victims are rarely so well-known, something of the same sort of impulse to make a public display of emotion at the site of a tragedy may be partly responsible for the growing popularity of roadside memorials.

In the United Kingdom
United Kingdom
The United Kingdom of Great Britain and Northern IrelandIn the United Kingdom and Dependencies, other languages have been officially recognised as legitimate autochthonous languages under the European Charter for Regional or Minority Languages...
, the practice of erecting roadside memorials has recently sparked a media debate about the danger these may pose to other road users and to people erecting the memorials in unsafe places. This debate has been sparked by accounts of dangerous actions, such as an adult crossing a main road with a child to place a tribute. Some jurisdictions already enforce local regulations, and police officials and local councillors have suggested that uniform rules be introduced across the country. For example, according to the BBC
BBC
The British Broadcasting Corporation is a British public service broadcaster. Its headquarters is at Broadcasting House in the City of Westminster, London. It is the largest broadcaster in the world, with about 23,000 staff...
, in Merthyr Tydfil
Merthyr Tydfil
Merthyr Tydfil is a town in Wales, with a population of about 30,000. Although once the largest town in Wales, it is now ranked as the 15th largest urban area in Wales. It also gives its name to a county borough, which has a population of around 55,000. It is located in the historic county of...
, memorials will only be allowed where it is deemed safe and appropriate, and they will be removed after three months.

In the United States
United States
The United States of America is a federal constitutional republic comprising fifty states and a federal district...
, the legal situation varies from state to state. In California
California
California is a state located on the West Coast of the United States. It is by far the most populous U.S. state, and the third-largest by land area...
, residents must pay a state fee of $1,000. The states of Colorado
Colorado
Colorado is a U.S. state that encompasses much of the Rocky Mountains as well as the northeastern portion of the Colorado Plateau and the western edge of the Great Plains...
, Massachusetts
Massachusetts
The Commonwealth of Massachusetts is a state in the New England region of the northeastern United States of America. It is bordered by Rhode Island and Connecticut to the south, New York to the west, and Vermont and New Hampshire to the north; at its east lies the Atlantic Ocean. As of the 2010...
, and Wisconsin
Wisconsin
Wisconsin is a U.S. state located in the north-central United States and is part of the Midwest. It is bordered by Minnesota to the west, Iowa to the southwest, Illinois to the south, Lake Michigan to the east, Michigan to the northeast, and Lake Superior to the north. Wisconsin's capital is...
ban such memorials. Other states impose specific requirements. In Birmingham, Alabama
Birmingham, Alabama
Birmingham is the largest city in Alabama. The city is the county seat of Jefferson County. According to the 2010 United States Census, Birmingham had a population of 212,237. The Birmingham-Hoover Metropolitan Area, in estimate by the U.S...
, roadside memorials have been removed from Interstate highways.