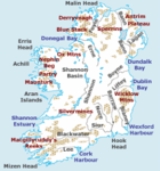 The River Bann is the longest river
River
A river is a natural watercourse, usually freshwater, flowing towards an ocean, a lake, a sea, or another river. In a few cases, a river simply flows into the ground or dries up completely before reaching another body of water. Small rivers may also be called by several other names, including...
in Northern Ireland
Northern Ireland
Northern Ireland is one of the four countries of the United Kingdom. Situated in the north-east of the island of Ireland, it shares a border with the Republic of Ireland to the south and west...
, the total length being 80 miles (129 km). The river winds its way from the south east corner of Northern Ireland to the north west coast, pausing in the middle to widen into the enormous Lough Neagh
Lough Neagh
Lough Neagh, sometimes Loch Neagh, is a large freshwater lake in Northern Ireland. Its name comes .-Geography:With an area of , it is the largest lake in the British Isles and ranks among the forty largest lakes of Europe. Located twenty miles to the west of Belfast, it is approximately twenty...
. According to C.Michael Hogan, the Bann River Valley is a settlement area for some of the first human arrivals in Ireland after the most recent glacial retreat. The river has played an important part in the industrialisation of the north of Ireland
Ireland
Ireland is an island to the northwest of continental Europe. It is the third-largest island in Europe and the twentieth-largest island on Earth...
, especially in the linen
Linen
Linen is a textile made from the fibers of the flax plant, Linum usitatissimum. Linen is labor-intensive to manufacture, but when it is made into garments, it is valued for its exceptional coolness and freshness in hot weather....
industry. Today salmon and eel fisheries are the most important economic features of the river. The river is often used as a dividing line between the eastern and western areas of Northern Ireland, often labelled the "Bann divide". Towns, councils and businesses "west of the Bann" are often seen as having less investment and government spending than those to the east. It is also seen as a religious, economic and political divide, with Catholics, Nationalists and Republicans being in the majority to the west, and Protestants and Unionists in the majority to the east; and with the financial and industrial capital of Greater Belfast
Greater Belfast
Greater Belfast is an area surrounding and including Belfast in Northern Ireland.It includes Belfast and parts of the North Down, Lisburn, Castlereagh and Newtownabbey district council areas. Greater Belfast is the largest urban area in Northern Ireland, and second largest in Ireland...
to the east with the west of the Bann having been more largely agricultural and rural.

The Upper Bann rises in the Mourne Mountains in County Down
County Down
-Cities:*Belfast *Newry -Large towns:*Dundonald*Newtownards*Bangor-Medium towns:...
and flows into Lough Neagh
Lough Neagh
Lough Neagh, sometimes Loch Neagh, is a large freshwater lake in Northern Ireland. Its name comes .-Geography:With an area of , it is the largest lake in the British Isles and ranks among the forty largest lakes of Europe. Located twenty miles to the west of Belfast, it is approximately twenty...
at Bannfoot
Bannfoot
Bannfoot is a small village in the townland of Derryinver, County Armagh, Northern Ireland. It sits where the Upper Bann flows into Lough Neagh. Bannfoot is within the Craigavon Borough Council area.-History:...
, County Armagh
County Armagh
-History:Ancient Armagh was the territory of the Ulaid before the fourth century AD. It was ruled by the Red Branch, whose capital was Emain Macha near Armagh. The site, and subsequently the city, were named after the goddess Macha...
. This stretch is one of the most popular coarse fishing rivers in Europe. Near Portadown
Portadown
Portadown is a town in County Armagh, Northern Ireland. The town sits on the River Bann in the north of the county, about 23 miles south-west of Belfast...
it connects with the now disused Newry Canal
Newry Canal
The Newry Canal, located in Northern Ireland, was built to link the Tyrone coalfields to the Irish Sea at Carlingford Lough near Newry.-History:...
, which once gave access south to the Irish Sea
Irish Sea
The Irish Sea separates the islands of Ireland and Great Britain. It is connected to the Celtic Sea in the south by St George's Channel, and to the Atlantic Ocean in the north by the North Channel. Anglesey is the largest island within the Irish Sea, followed by the Isle of Man...
.

The Lower Bann flows from Lough Neagh at Toome
Toome
Toome or Toom is a small village and townland on the northwest corner of Lough Neagh in County Antrim, Northern Ireland. In the 2001 Census it had a population of 722.-History:...
to the Atlantic Ocean
Atlantic Ocean
The Atlantic Ocean is the second-largest of the world's oceanic divisions. With a total area of about , it covers approximately 20% of the Earth's surface and about 26% of its water surface area...
at Portstewart
Portstewart
Portstewart is a small town in County Londonderry, Northern Ireland. It had a population of 7,803 people in the 2001 Census. It is a seaside resort neighbouring Portrush. Of the two towns, Portstewart is decidedly quieter with more sedate attractions. Its harbour and scenic coastal paths form an...
. The river is a canalised waterway with five locks (Toome, Portna, Movanagher, Carnroe and Castleroe) along its 38 miles (51 km). The river is very popular with water sports enthusiasts, anglers and cruisers and has minimal commercial traffic. It acts as most of the border between County Antrim
County Antrim
County Antrim is one of six counties that form Northern Ireland, situated in the north-east of the island of Ireland. Adjoined to the north-east shore of Lough Neagh, the county covers an area of 2,844 km², with a population of approximately 616,000...
and County Londonderry
County Londonderry
The place name Derry is an anglicisation of the old Irish Daire meaning oak-grove or oak-wood. As with the city, its name is subject to the Derry/Londonderry name dispute, with the form Derry preferred by nationalists and Londonderry preferred by unionists...
. The only commercial port on the river is at Coleraine
Coleraine
Coleraine is a large town near the mouth of the River Bann in County Londonderry, Northern Ireland. It is northwest of Belfast and east of Derry, both of which are linked by major roads and railway connections...
. Ships from Londonderry Port
Londonderry Port
Londonderry Port at Lisahally is a port near Derry, Northern Ireland. It is the United Kingdom’s most westerly port, has capacity for 30,000 ton vessels and accepts cruise ships. The current port is on the east bank of the River Foyle at the southern end of Lough Foyle, by the small village of...
and the Port of Belfast
Port of Belfast
Belfast Harbour is a major maritime gateway in Northern Ireland, serving the Northern Ireland economy and increasingly that of the Republic of Ireland...
transfer coal and scrap metal.