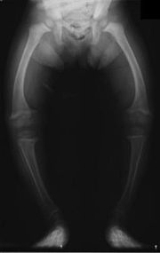 My daughter was diagnosed with rickets at the age of 12months, she was put on vitamin d an d calcium supplements, her weight is 18 and a half pounds ...
More


An X-ray
X-ray
X-radiation is a form of electromagnetic radiation. X-rays have a wavelength in the range of 0.01 to 10 nanometers, corresponding to frequencies in the range 30 petahertz to 30 exahertz and energies in the range 120 eV to 120 keV. They are shorter in wavelength than UV rays and longer than gamma...
or radiograph
Radiography
Radiography is the use of X-rays to view a non-uniformly composed material such as the human body. By using the physical properties of the ray an image can be developed which displays areas of different density and composition....
of an advanced sufferer from rickets tends to present in a classic way: bow legs
(outward curve of long bone of the legs) and a deformed chest. Changes in the skull also occur causing a distinctive "square headed" appearance. These deformities persist into adult life if not treated. Long-term consequences include permanent bends or disfiguration of the long bones, and a curved back
Scoliosis
Scoliosis is a medical condition in which a person's spine is curved from side to side. Although it is a complex three-dimensional deformity, on an X-ray, viewed from the rear, the spine of an individual with scoliosis may look more like an "S" or a "C" than a straight line...
.

The primary cause of rickets is a vitamin D deficiency. Vitamin D is required for proper calcium absorption from the gut. Sunlight, especially ultraviolet light, lets human skin cells convert Vitamin D from an inactive to active state. In the absence of vitamin D, dietary calcium is not properly absorbed, resulting in hypocalcaemia
Hypocalcaemia
In medicine, hypocalcaemia is the presence of low serum calcium levels in the blood, usually taken as less than 2.1 mmol/L or 9 mg/dl or an ionized calcium level of less than 1.1 mmol/L or 4.5 mg/dL. It is a type of electrolyte disturbance...
, leading to skeletal and dental deformities and neuromuscular symptoms, e.g. hyperexcitability. Foods that contain vitamin D include butter, eggs, fish liver oils, margarine, fortified milk and juice, and oily fish
Oily fish
Oily fish have oil in their tissues and in the belly cavity around the gut. Their fillets contain up to 30 percent oil, although this figure varies both within and between species...
es such as tuna, herring, and salmon. A rare X-linked dominant
X-linked dominant
X-linked dominant inheritance, sometimes referred to as X-linked dominance, is a mode of genetic inheritance by which a dominant gene is carried on the X chromosome. As an inheritance pattern, it is less common than the X-linked recessive type...
form exists called Vitamin D resistant rickets
X-linked hypophosphatemia
X-linked hypophosphatemia , also called X-linked dominant hypophosphatemic rickets, X-linked vitamin d-resistant rickets or hypophosphatemic vitamin d-resistant rickets , is an X-linked dominant form of rickets that differs from most cases of rickets in that ingestion of vitamin D is relatively...
.

Cases have been reported in Britain in recent years of rickets in children of many social backgrounds caused by inability to make vitamin D because the sun's ultraviolet light was not reaching the skin because of persistent use of strong sunblock, or too much "covering up" in sunlight, or spending too much time indoors. Other cases have been reported among the children of some ethnic groups in which mothers avoid exposure to the sun for religious or cultural reasons, leading to a maternal shortage of vitamin D. The British Medical Journal
British Medical Journal
BMJ is a partially open-access peer-reviewed medical journal. Originally called the British Medical Journal, the title was officially shortened to BMJ in 1988. The journal is published by the BMJ Group, a wholly owned subsidiary of the British Medical Association...
reported in 2010 that doctors in Newcastle on Tyne saw 20 cases of rickets per year.

Rickets may be diagnosed with the help of: 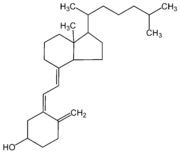 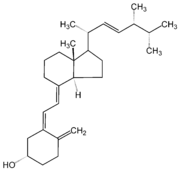 Treatment involves increasing dietary intake of calcium, phosphates and vitamin D. Exposure to ultraviolet B light (sunshine when the sun is highest in the sky), cod liver oil
Cod liver oil
Cod liver oil is a nutritional supplement derived from liver of cod fish. It has high levels of the omega-3 fatty acids, EPA and DHA, and very high levels of vitamin A and vitamin D. It is widely taken to ease the symptoms of arthritis and for other health benefits...
, halibut-liver oil, and viosterol
Ergosterol
Ergosterol is a sterol found in fungi, and named for ergot, a common name for the members of the fungal genus Claviceps from which ergosterol was first isolated. Ergosterol does not occur in plant or animal cells...
are all sources of vitamin D.

A sufficient amount of ultraviolet B light in sunlight each day and adequate supplies of calcium and phosphorus in the diet can prevent rickets. Darker-skinned babies need to be exposed longer to the ultraviolet rays
Ultraviolet
Ultraviolet light is electromagnetic radiation with a wavelength shorter than that of visible light, but longer than X-rays, in the range 10 nm to 400 nm, and energies from 3 eV to 124 eV...
. The replacement of vitamin D has been proven to correct rickets using these methods of ultraviolet light therapy and medicine.

Recommendations are for 400 international unit
International unit
In pharmacology, the International Unit is a unit of measurement for the amount of a substance, based on biological activity or effect. It is abbreviated as IU, as UI , or as IE...
s (IU) of vitamin D a day for infants and children. Children who do not get adequate amounts of vitamin D are at increased risk of rickets. Vitamin D is essential for allowing the body to uptake calcium for use in proper bone calcification and maintenance.

Sufficient vitamin D levels can also be achieved through dietary supplementation and/or exposure to sunlight. Vitamin D3 (cholecalciferol
Cholecalciferol
Cholecalciferol is a form of vitamin D, also called vitamin D3 or calciol.It is structurally similar to steroids such as testosterone, cholesterol, and cortisol .-Forms:Vitamin D3 has several forms:...
) is the preferred form since it is more readily absorbed than vitamin D2. Most dermatologists
Dermatology
Dermatology is the branch of medicine dealing with the skin and its diseases, a unique specialty with both medical and surgical aspects. A dermatologist takes care of diseases, in the widest sense, and some cosmetic problems of the skin, scalp, hair, and nails....
recommend vitamin D supplementation as an alternative to unprotected ultraviolet exposure due to the increased risk of skin cancer associated with sun exposure. Endogenous production with full body exposure to sunlight is approximately 250 µg (10,000 IU) per day.

In developed countries, rickets is a rare disease
Rare disease
A rare disease, also referred to as an orphan disease, is any disease that affects a small percentage of the population.Most rare diseases are genetic, and thus are present throughout the person's entire life, even if symptoms do not immediately appear...
(incidence of less than 1 in 200,000).

Those at higher risk for developing rickets include:

Individuals with red hair
Red hair
Red hair occurs on approximately 1–2% of the human population. It occurs more frequently in people of northern or western European ancestry, and less frequently in other populations...
have been speculated to have a decreased risk for rickets due to their greater production of vitamin D in sunlight.

Children ages 6 months to 24 months are at highest risk, because their bones are rapidly growing. Long-term consequences include permanent bends or disfiguration of the long bones, and a curved back.
The source of this article is wikipedia, the free encyclopedia.  The text of this article is licensed under the GFDL.