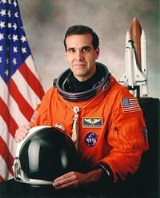 Encyclopedia
Richard Alan "Rick" Mastracchio (born February 11, 1960) is an American
United States
The United States of America is a federal constitutional republic comprising fifty states and a federal district...
engineer
Engineer
An engineer is a professional practitioner of engineering, concerned with applying scientific knowledge, mathematics and ingenuity to develop solutions for technical problems. Engineers design materials, structures, machines and systems while considering the limitations imposed by practicality,...
and a NASA
NASA
The National Aeronautics and Space Administration is the agency of the United States government that is responsible for the nation's civilian space program and for aeronautics and aerospace research...
astronaut
Astronaut
An astronaut or cosmonaut is a person trained by a human spaceflight program to command, pilot, or serve as a crew member of a spacecraft....
. He has flown on three NASA Space Shuttle missions as a mission specialist
Mission Specialist
A Mission Specialist is a position held by certain NASA astronauts during Space Shuttle missions. A Mission Specialist is assigned to a limited field of the mission, such as for medical experiments or technical quests....
. Mastracchio is currently assigned as the Flight Engineer on the Soyuz TMA-11M
Soyuz TMA-11M
Soyuz TMA-11M is a planned 2013 flight to the International Space Station. It will transport three members of the Expedition 38 crew to the International Space Station. TMA-11M will be the 120th flight of a Soyuz spacecraft, the first flight launching in 1967...
/Expedition 38
Expedition 38
Expedition 38 is scheduled to be the thirty-eighth expedition to the International Space Station.-Crew:Sources:JAXA, NASA, ESA-External links:*...
/Expedition 39
Expedition 39
Expedition 39 is scheduled to be the thirty-ninth expedition to the International Space Station. It will also mark the first time the ISS is under command of a Japanese astronaut - space veteran Koichi Wakata...
long duration spaceflight scheduled for 2013-2014.

Richard Mastracchio was born in Waterbury, Connecticut
Waterbury, Connecticut
Waterbury is a city in New Haven County, Connecticut, on the Naugatuck River, 33 miles southwest of Hartford and 77 miles northeast of New York City...
and graduated from Crosby High School in 1978. He received a Bachelor of Science degree in electrical engineering/computer science from the University of Connecticut in 1982, a Master of Science degree in electrical engineering from Rensselaer Polytechnic Institute
Rensselaer Polytechnic Institute
Stephen Van Rensselaer established the Rensselaer School on November 5, 1824 with a letter to the Rev. Dr. Samuel Blatchford, in which van Rensselaer asked Blatchford to serve as the first president. Within the letter he set down several orders of business. He appointed Amos Eaton as the school's...
in 1987, and a Master of Science degree in physical science from the University of Houston–Clear Lake
University of Houston–Clear Lake
The University of Houston–Clear Lake is a state university, and is a component institution of the University of Houston System. Its campus spans 524-acre in Pasadena, with a satellite campus in Pearland. Founded in 1971, UHCL has an enrollment of more than 8,000 students...
in 1991.

Mastracchio worked for Hamilton Standard in Connecticut as an engineer in the system design group from 1982 until 1987. During that time, he participated in the development of high performance, inertial measurement units and flight control computers.

In 1987, Mastracchio moved to Houston, Texas
Houston, Texas
Houston is the fourth-largest city in the United States, and the largest city in the state of Texas. According to the 2010 U.S. Census, the city had a population of 2.1 million people within an area of . Houston is the seat of Harris County and the economic center of , which is the ...
, to work for the Rockwell Shuttle Operations Company at the Johnson Space Center. In 1990, he joined NASA as an engineer in the Flight Crew Operations Directorate. His duties included the development of space shuttle flight software requirements, the verification of space shuttle flight software in the Shuttle Avionics Integration Laboratory, and the development of ascent and abort crew procedures for the Astronaut Office.

From 1993 until 1996, he worked as an ascent/entry Guidance and Procedures Officer (GPO) in Mission Control. An ascent/entry GPO has both pre-mission and real time Space Shuttle support responsibilities in the areas of onboard guidance, navigation, and targeting. During that time, he supported seventeen missions as a flight controller.

In April 1996, Mastracchio was selected as an Astronaut Candidate and started training in August 1996. Having completed two years of training and evaluation, he is qualified for flight assignment as a mission specialist. Mastracchio has worked technical issues for the Astronaut Office Computer Support Branch, for Space Station Operations, and the EVA Branch. He next served as lead for cockpit avionics upgrades.

Mastracchio flew as a mission specialist on STS-106
STS-106
STS-106 was a Space Shuttle mission to the International Space Station flown by Space Shuttle Atlantis.-Crew:-Mission parameters:*Mass:**Orbiter Liftoff: **Orbiter Landing: **Payload: *Perigee: 233 mi...
. His next mission was STS-118
STS-118
- Crew notes :Astronaut Clayton Anderson originally was slated to be launched to the ISS on this mission, but was moved to STS-117. His replacement was Alvin Drew....
in August 2007, followed by STS-131
STS-131
STS-131 was a NASA Space Shuttle mission to the International Space Station . launched on 5 April 2010 at 6:22 am from Kennedy Space Center's launch pad 39A, and landed at 9:08 am on 20 April 2010 on runway 33 at the Kennedy Space Center's Shuttle Landing Facility...
on April 2010. He has logged over 283 hours in space. 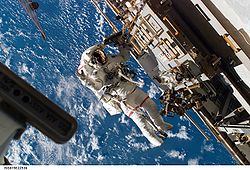 STS-106 Atlantis (September 8-20, 2000). During the 12-day mission, the crew prepared the International Space Station for the arrival of the first permanent crew. The five astronauts and two cosmonauts delivered more than 6,600 pounds of supplies and installed batteries, power converters, a toilet and a treadmill. Two crewmembers performed a space walk to connect power, data and communications cables between the newly arrived Zvezda Service Module and the other station modules. Mastracchio was the ascent/entry flight engineer, the primary robotic arm operator, and responsible for the transfer of items from the Space Shuttle to the Space Station. STS-106 orbited the Earth 185 times, and covered 4.9 million miles in 11 days, 19 hours, and 10 minutes.

STS-118 (August 8-21, 2007) was the 119th space shuttle flight, the 22nd flight to the station, and the 20th flight for Endeavour. During the mission Endeavour's crew successfully added another truss segment, a new gyroscope and external spare parts platform to the International Space Station. Mastracchio was the ascent/entry flight engineer and participated in three of the four spacewalks. Traveling 5.3 million miles in space, the STS-118 mission was completed in 12 days, 17 hours, 55 minutes and 34 seconds.

STS-131 Discovery (April 5-20, 2010), a resupply mission to the International Space Station, was launched at night from the Kennedy Space Center. On arrival at the station, Discovery’s crew dropped off more than 27,000 pounds of hardware, supplies and equipment, including a tank full of ammonia coolant, new crew sleeping quarters, and three experiment racks. As the EVA lead, Mastracchio performed three spacewalks during this mission and logged 20 hours and 17 minutes of evtravehicular activity. On the return journey, the Leonardo Multi-Purpose Logistics Module
Multi-Purpose Logistics Module
A Multi-Purpose Logistics Module is a large pressurized container used on Space Shuttle missions to transfer cargo to and from the International Space Station . An MPLM was carried in the cargo bay of a Shuttle and berthed to the Unity or Harmony modules on the ISS. From there, supplies were...
inside Discovery’s payload bay was packed with over 6,000 pounds of hardware, science results, and trash. The STS-131 mission was accomplished in 15 days, 02 hours, 47 minutes, 10 seconds, and traveled 6,232,235 statute miles in 238 orbits.