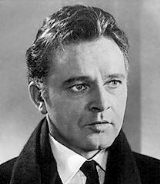 Overview
Richard Burton, CBE
Order of the British Empire
The Most Excellent Order of the British Empire is an order of chivalry established on 4 June 1917 by George V of the United Kingdom. The Order comprises five classes in civil and military divisions...
(10 November 1925 5 August 1984) was a Welsh
Welsh people
The Welsh people are an ethnic group and nation associated with Wales and the Welsh language.John Davies argues that the origin of the "Welsh nation" can be traced to the late 4th and early 5th centuries, following the Roman departure from Britain, although Brythonic Celtic languages seem to have...
actor. He was nominated seven times for an Academy Award, six of which were for Best Actor in a Leading Role (without ever winning), and was a recipient of BAFTA, Golden Globe and Tony Award
Tony Award
The Antoinette Perry Award for Excellence in Theatre, more commonly known as a Tony Award, recognizes achievement in live Broadway theatre. The awards are presented by the American Theatre Wing and The Broadway League at an annual ceremony in New York City. The awards are given for Broadway...
s for Best Actor. Although never trained as an actor, Burton was, at one time, the highest-paid actor in Hollywood. He remains closely associated in the public consciousness with his second wife, actress Elizabeth Taylor
Elizabeth Taylor
Dame Elizabeth Rosemond "Liz" Taylor, DBE was a British-American actress. From her early years as a child star with MGM, she became one of the great screen actresses of Hollywood's Golden Age...
; the couple's turbulent relationship was rarely out of the news.
Richard Burton was born Richard Walter Jenkins in the village of Pontrhydyfen
Pontrhydyfen
Pontrhydyfen is a small village in the Afan Valley, in Neath Port Talbot county borough in Wales.-Location:It is situated in the Afan Valley at , at the confluence of the River Afan and the smaller Afon Pelenna, 1.8 miles north of the larger village of Cwmafan and not far from the towns of Port...
, Neath Port Talbot
Neath Port Talbot
Neath Port Talbot is a county borough and one of the unitary authority areas of Wales. Neath Port Talbot is the 8th most populous county in Wales and the third most populous county borough....
, Wales.

Richard Burton and Clint Eastwood starred together in a war movie involving the guns of Navarone. What was the name of the picture
More
x