Encyclopedia
Richard Assmann; (13 April 1845 - 28 May 1918) was a German meteorologist and physician who was a native of Magdeburg
Magdeburg
Magdeburg , is the largest city and the capital city of the Bundesland of Saxony-Anhalt, Germany. Magdeburg is situated on the Elbe River and was one of the most important medieval cities of Europe....
. 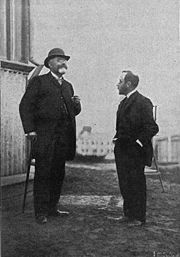 In 1868 he received his medical doctorate in Berlin
Berlin
Berlin is the capital city of Germany and is one of the 16 states of Germany. With a population of 3.45 million people, Berlin is Germany's largest city. It is the second most populous city proper and the seventh most populous urban area in the European Union...
, and from 1870 to 1879 was a general practitioner
General practitioner
A general practitioner is a medical practitioner who treats acute and chronic illnesses and provides preventive care and health education for all ages and both sexes. They have particular skills in treating people with multiple health issues and comorbidities...
in Bad Freienwalde
Bad Freienwalde
Bad Freienwalde is a spa town in the Märkisch-Oderland district in Brandenburg, Germany. It is situated on an old branch of the Oder river at the northwestern rim of the Oderbruch basin, east of Eberswalde, and northeast of Berlin, near the border with Poland...
. In 1879 he returned to Magdeburg to practice medicine. In 1885 he earned a doctorate in secondary studies at the Faculty of Philosophy at the University of Halle, and subsequently became a scientific officer at the Royal Meteorological Institute at Berlin-Grünau. From 1905 to 1914 he was director of the Prussian Royal Aeronautical Observatory at Lindenberg
Lindenberg
Lindenberg is a German name meaning "Tilia tree" and may refer to:* Lindenberg im Allgäu, a town in Bavaria, Germany* Lindenberg, Mecklenburg-Vorpommern, a municipality in Mecklenburg-Vorpommern, Germany...
, and afterwards was an honorary professor at the University of Giessen
University of Giessen
The University of Giessen is officially called the Justus Liebig University Giessen after its most famous faculty member, Justus von Liebig, the founder of modern agricultural chemistry and inventor of artificial fertiliser.-History:The University of Gießen is among the oldest institutions of...
.

Richard Assmann had a particular interest in high altitude research of the Earth's atmosphere and was a pioneer in the field of aerology. With Léon Teisserenc de Bort
Léon Teisserenc de Bort
Léon Philippe Teisserenc de Bort was a French meteorologist who became famous for his discovery of the stratosphere...
(1855-1913), he is credited as co-discoverer of the stratosphere
Stratosphere
The stratosphere is the second major layer of Earth's atmosphere, just above the troposphere, and below the mesosphere. It is stratified in temperature, with warmer layers higher up and cooler layers farther down. This is in contrast to the troposphere near the Earth's surface, which is cooler...
, as both men announced their discovery during the same time period in 1902.

From 1887 to 1892, with airship designer Rudolf Hans Bartsch von Sigsfeld (1861-1902), he developed a psychrometer for accurate measurement of atmospheric humidity
Humidity
Humidity is a term for the amount of water vapor in the air, and can refer to any one of several measurements of humidity. Formally, humid air is not "moist air" but a mixture of water vapor and other constituents of air, and humidity is defined in terms of the water content of this mixture,...
and temperature. This was the first instrument that was able to provide reliable temperature readings with high altitude balloons, as it was capable of shielding its thermometric elements from solar radiation. The technical implementation and production of this device took place in the factory of Rudolf Fuess (1838-1917).

From 1888 to 1899 he was a member of the Verein zur Förderung der Luftschifffahrt, where he organized scientific balloon ascents for atmospheric study. He is also remembered for popularizating the field of meteorology, and played a significant role in several scientific newspapers and magazines during his career. From 1884 until his death he published the popular monthly magazine Das Wetter (The Weather). In 1903 he was awarded the Buys Ballot Medal
Buys Ballot Medal
The Buys Ballot Medal is a prize given out by the Royal Netherlands Academy of Arts and Sciences. It was instituted in 1888 to honor the achievements of meteorologist C.H.D. Buys Ballot...
with meteorologist Arthur Berson
Arthur Berson
Arthur Josef Stanislaus Berson was a Polish meteorologist and pioneer of aerology who was a native of Neu Sandez, Galicia ....
(1859-1942) by Royal Netherlands Academy of Sciences.
The source of this article is wikipedia, the free encyclopedia.  The text of this article is licensed under the GFDL.