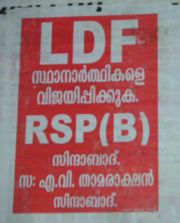 RSP(B) joined the United Democratic Front
United Democratic Front (India)
United Democratic Front is an alliance of political parties of Kerala state in India. This alliance is led by the Indian National Congress....
, the alliance in Kerala which is led by the Indian National Congress
Indian National Congress
The Indian National Congress is one of the two major political parties in India, the other being the Bharatiya Janata Party. It is the largest and one of the oldest democratic political parties in the world. The party's modern liberal platform is largely considered center-left in the Indian...
. The party won two seats in the Kerala Legislative Assembly, Shibu Baby John (Baby John's son) and Babu Divakaran, in the 2001 state election. In total the party had put up four candidates in the state elections that year. Together the four candidates got 215 562 votes (1,37% of the votes in the state). After the 2001 elections, the RSP(B) became part of the state government. Babu Divakaran became the Minister of Labour in the state government.