Overview
Apparent retrograde motion is the motion of a planet
Planet
A planet is a celestial body orbiting a star or stellar remnant that is massive enough to be rounded by its own gravity, is not massive enough to cause thermonuclear fusion, and has cleared its neighbouring region of planetesimals.The term planet is ancient, with ties to history, science,...
ary body in a direction opposite to that of other bodies within its system as observed from a particular vantage point. Direct motion or prograde motion is motion in the same direction as other bodies.

While the terms direct and prograde are equivalent in this context, the former is the traditional term in astronomy.

Which planets in our soloar system exhibit a retrograde rotation?
More

Apparent retrograde motion is the motion of a planet
Planet
A planet is a celestial body orbiting a star or stellar remnant that is massive enough to be rounded by its own gravity, is not massive enough to cause thermonuclear fusion, and has cleared its neighbouring region of planetesimals.The term planet is ancient, with ties to history, science,...
ary body in a direction opposite to that of other bodies within its system as observed from a particular vantage point. Direct motion or prograde motion is motion in the same direction as other bodies.

While the terms direct and prograde are equivalent in this context, the former is the traditional term in astronomy. Prograde was first seen in an abstract of an astronomy-related professional article in 1963.

The term retrograde is from the Latin word retrogradus–"backward-step". The affix retro- meaning backwards and gradi step or to go. Retrograde is most commonly an adjective
Adjective
In grammar, an adjective is a 'describing' word; the main syntactic role of which is to qualify a noun or noun phrase, giving more information about the object signified....
used to describe the path of a planet as it travels through the night sky, with respect to the zodiac
Zodiac
In astronomy, the zodiac is a circle of twelve 30° divisions of celestial longitude which are centred upon the ecliptic: the apparent path of the Sun across the celestial sphere over the course of the year...
, stars, and other bodies of the celestial canopy. In this context, the term refers to planets as they appear from Earth, to briefly stop and reverse direction at certain times, though in reality they perpetually orbit in the same uniform direction.

"Mercury in retrograde" is a good example of the term used as a noun
Noun
In linguistics, a noun is a member of a large, open lexical category whose members can occur as the main word in the subject of a clause, the object of a verb, or the object of a preposition .Lexical categories are defined in terms of how their members combine with other kinds of...
for retrograde motion. Retrograde is also sometimes used as an intransitive verb
Verb
A verb, from the Latin verbum meaning word, is a word that in syntax conveys an action , or a state of being . In the usual description of English, the basic form, with or without the particle to, is the infinitive...
meaning to become, to appear, to behave—or appear to move—in a retrograde fashion. 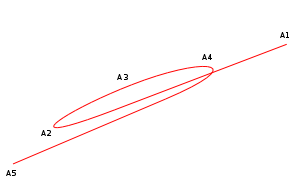 As seen from Earth, all the planets appear to periodically switch direction as they cross the sky. Though all stars and planets appear to move from east to west on a nightly basis in response to the rotation of Earth, the outer planets generally drift slowly eastward relative to the stars. This motion is normal for the planets, and so is considered direct motion. However, since Earth completes its orbit in a shorter period of time than the planets outside its orbit, we periodically overtake them, like a faster car on a multi-lane highway. When this occurs, the planet we are passing will first appear to stop its eastward drift, and then drift back toward the west. Then, as Earth swings past the planet in its orbit, it appears to resume its normal motion west to east. Inner planets Venus
Venus
Venus is the second planet from the Sun, orbiting it every 224.7 Earth days. The planet is named after Venus, the Roman goddess of love and beauty. After the Moon, it is the brightest natural object in the night sky, reaching an apparent magnitude of −4.6, bright enough to cast shadows...
and Mercury
Mercury (planet)
Mercury is the innermost and smallest planet in the Solar System, orbiting the Sun once every 87.969 Earth days. The orbit of Mercury has the highest eccentricity of all the Solar System planets, and it has the smallest axial tilt. It completes three rotations about its axis for every two orbits...
appear to move in retrograde in a similar mechanism, but as they can never be in opposition to the Sun as seen from Earth, their retrograde cycles are tied to their lower conjunctions with the Sun
Sun
The Sun is the star at the center of the Solar System. It is almost perfectly spherical and consists of hot plasma interwoven with magnetic fields...
. Asteroids and Kuiper Belt
Kuiper belt
The Kuiper belt , sometimes called the Edgeworth–Kuiper belt, is a region of the Solar System beyond the planets extending from the orbit of Neptune to approximately 50 AU from the Sun. It is similar to the asteroid belt, although it is far larger—20 times as wide and 20 to 200 times as massive...
Objects (including Pluto
Pluto
Pluto, formal designation 134340 Pluto, is the second-most-massive known dwarf planet in the Solar System and the tenth-most-massive body observed directly orbiting the Sun...
) also exhibit apparent retrogradation.

Interestingly, Galileo's drawings show that he first observed Neptune
Neptune
Neptune is the eighth and farthest planet from the Sun in the Solar System. Named for the Roman god of the sea, it is the fourth-largest planet by diameter and the third largest by mass. Neptune is 17 times the mass of Earth and is slightly more massive than its near-twin Uranus, which is 15 times...
on December 28, 1612, and again on January 27, 1613. On both occasions, Galileo mistook Neptune for a fixed star when it appeared very close—in conjunction—to Jupiter
Jupiter
Jupiter is the fifth planet from the Sun and the largest planet within the Solar System. It is a gas giant with mass one-thousandth that of the Sun but is two and a half times the mass of all the other planets in our Solar System combined. Jupiter is classified as a gas giant along with Saturn,...
in the night sky, hence, he is not credited with Neptune's discovery. During the period of his first observation in December 1612, Neptune was stationary in the sky because it had just turned retrograde that very day. Since Neptune was only beginning its yearly retrograde cycle, the motion of the planet was far too slight to be detected with Galileo's small telescope
Telescope
A telescope is an instrument that aids in the observation of remote objects by collecting electromagnetic radiation . The first known practical telescopes were invented in the Netherlands at the beginning of the 1600s , using glass lenses...
.

The more distant planets retrograde more frequently:
The retrogradation of an hypothetical extremely distant (and non moving) planet would take place during a half-year, with the planet's apparent yearly motion being reduced to a parallax
Parallax
Parallax is a displacement or difference in the apparent position of an object viewed along two different lines of sight, and is measured by the angle or semi-angle of inclination between those two lines. The term is derived from the Greek παράλλαξις , meaning "alteration"...
ellipse.

The period between such retrogradations is the synodic period of the planet.

This apparent retrogradation puzzled ancient astronomers, and was one reason they named these bodies 'planets' in the first place: 'Planet' comes from the Greek word for 'wanderer'. In the geocentric model of the solar system, retrograde motion was explained by having the planets travel in deferents and epicycle
Deferent and epicycle
In the Ptolemaic system of astronomy, the epicycle was a geometric model used to explain the variations in speed and direction of the apparent motion of the Moon, Sun, and planets...
s. It was not understood to be an illusion until the time of Copernicus
Nicolaus Copernicus
Nicolaus Copernicus was a Renaissance astronomer and the first person to formulate a comprehensive heliocentric cosmology which displaced the Earth from the center of the universe....
. The accompanying animated diagram shows the retrograde motion of Mars for the year 2003, which occurs against the background of the constellation Aquarius
Aquarius (constellation)
Aquarius is a constellation of the zodiac, situated between Capricornus and Pisces. Its name is Latin for "water-bearer" or "cup-bearer", and its symbol is , a representation of water....
.

In astrology
Astrology
Astrology consists of a number of belief systems which hold that there is a relationship between astronomical phenomena and events in the human world...
, the retrograde motion of the planets was traditionally thought to be unlucky or inauspicious, as it went against the 'natural' order of movement, and a planet which was retrograde at the time of birth was considered a weak spot in the natal chart
Natal chart
In astrology, a natal chart is a stylized map of the universe with the "native" at the center. It is calculated for the exact time and location of the native's birth for the purposes of gaining insight into the native's personality and potential...
. Retrograde planets were traditionally considered to be weakened or to be rendered unfavorable in influence; however, according to some interpreters, their influence is strengthened, especially if they are malefic
Malefic planet
In astrology, a malefic planet, or simply malefic, is traditionally thought to bring bad luck and misfortune. Mars is considered the lesser malefic, while Saturn is the greater malefic. In modern astrology Uranus, Pluto and for some Ceres are also considered malefic.-See also:*Benefic...
planets. The Sun and the Moon are never retrograde. In the horoscope
Horoscope
In astrology, a horoscope is a chart or diagram representing the positions of the Sun, Moon, planets, the astrological aspects, and sensitive angles at the time of an event, such as the moment of a person's birth. The word horoscope is derived from Greek words meaning "a look at the hours" In...
, retrograde motion is usually noted by the symbol ℞
Rx
RX is the telegraph and radio abbreviation for "receive" or "receiver".Rx, RX, or rx may also refer to:, medical prescriptions* Rx, the symbol used to describe apparent retrograde motion of planets...
.