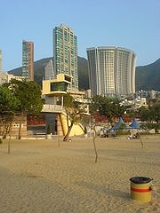 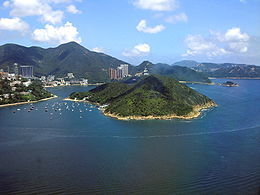 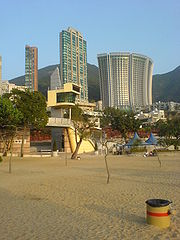 In 1841, the bay was used as a base by pirates and caused serious concern to foreign merchant ships trading with China
China
Chinese civilization may refer to:* China for more general discussion of the country.* Chinese culture* Greater China, the transnational community of ethnic Chinese.* History of China* Sinosphere, the area historically affected by Chinese culture...
. The pirates were subsequently repulsed by the British Fleet; hence the name. Another theory holds that the bay was named after HMS Repulse
HMS Repulse (1868)
HMS Repulse was the last wooden battleship constructed for the Royal Navy.She was laid down as a 90-gun second-rate line-of-battle ship with two decks; having been approved for conversion to a broadside ironclad in 1861, work on her was intentionally delayed until the performance of earlier...
which was stationed at the bay at one point.

The beach was extended artificially, and thus the sand closer to the shore is coarser than that further away.

Until the early 1960s, residential buildings were quite restricted. Three blocks of six storey apartments were developed by Dr. P. P. Chiu and his brother P. W. Chiu, part way up the mountain overlooking Repulse Bay. These were luxury apartments with servants' quarters, with only two apartments per floor in Blocks A and B. Apartments in Block C are smaller. For a long time, these were the only apartments allowed on the mountain.

Occupying the whole of the west side cliff above the beach was a large castle with a swimming pool, greenhouse and tennis court called Eucliffe, one of three castles owned by the millionaire Eu Tong Sween. The Eucliffe structure and historical site was demolished to make way for an elegant row of low apartments.

The former Repulse Bay Hotel was demolished in 2 stages during the 1970s and 1980s. Later a boutique shopping mall was constructed on part of the old hotel site to mimic some of the lost colonial architecture.

Repulse Bay is served by Repulse Bay Road, which connects Wong Nai Chung Gap Road and Tai Tam Road
Tai Tam Road
Tai Tam Road in Hong Kong, links between Chai Wan and Stanley, on Hong Kong Island. The famous Tai Tam Tuk Reservoir's dam is a part of the road, which is a narrow road section.-Bus routes:* 9 - Shau Kei Wan to Shek O...
. It is very convenient for people to travel to Repulse Bay as there many bus routes
Buses in Hong Kong
Bus services in Hong Kong have a long history. As of 2005, five companies operate franchised public bus services. There are also a variety of non-franchised public buses services, including feeder bus services to railway stations operated by MTR, and residents' services for residential estates...
from Central, such as no. 6, 6A, 6X, 260; or the no. 40 minibus
Public light bus
A Public light bus is a common public mode of transport in Hong Kong. It mainly serves the area that standard Hong Kong bus lines cannot reach as efficiently. It is also colloquially known as a minibus or a van, defined as a kind of share taxi....
. Transportation either takes you express through the Aberdeen Tunnel
Aberdeen Tunnel
Aberdeen Tunnel is a two-tube tunnel linking Happy Valley and Wong Chuk Hang near Aberdeen on the Hong Kong Island, Hong Kong. It shortens the travel time between the north and the south of the Hong Kong Island. It connects the Wong Chuk Hang Road in the south, and Canal Road Flyover in the...
, or along the slightly longer scenic route.

Beach-goers may also opt to drive there. The beach provides some parking space, and the nearby Repulse Bay Hotel also has parking facilities.