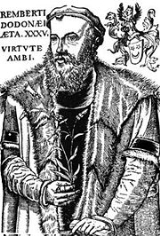 Encyclopedia
Rembert Dodoens was a Flemish physician
Physician
A physician is a health care provider who practices the profession of medicine, which is concerned with promoting, maintaining or restoring human health through the study, diagnosis, and treatment of disease, injury and other physical and mental impairments...
and botanist, also known under his Latinized name Rembertus Dodonaeus.

Dodoens was born in Mechelen
Mechelen
Mechelen Footnote: Mechelen became known in English as 'Mechlin' from which the adjective 'Mechlinian' is derived...
. In 1530 he began his studies in medicine
Medicine
Medicine is the science and art of healing. It encompasses a variety of health care practices evolved to maintain and restore health by the prevention and treatment of illness....
, cosmography
Cosmography
Cosmography is the science that maps the general features of the universe, describing both heaven and Earth...
and geography
Geography
Geography is the science that studies the lands, features, inhabitants, and phenomena of Earth. A literal translation would be "to describe or write about the Earth". The first person to use the word "geography" was Eratosthenes...
at the University of Leuven, where he graduated in 1535. He established himself as a physician
Physician
A physician is a health care provider who practices the profession of medicine, which is concerned with promoting, maintaining or restoring human health through the study, diagnosis, and treatment of disease, injury and other physical and mental impairments...
in Mechelen in 1538. He married Kathelijne De Bruyn(e) in 1539. He had a short stay in Basel
Basel
Basel or Basle In the national languages of Switzerland the city is also known as Bâle , Basilea and Basilea is Switzerland's third most populous city with about 166,000 inhabitants. Located where the Swiss, French and German borders meet, Basel also has suburbs in France and Germany...
(1542–1546). He turned down a chair at the University of Leuven in 1557. He equally turned down an offer to become court physician of emperor Philip II of Spain
Philip II of Spain
Philip II was King of Spain, Portugal, Naples, Sicily, and, while married to Mary I, King of England and Ireland. He was lord of the Seventeen Provinces from 1556 until 1581, holding various titles for the individual territories such as duke or count....
. He became the court physician of the Austria
Austria
Austria , officially the Republic of Austria , is a landlocked country of roughly 8.4 million people in Central Europe. It is bordered by the Czech Republic and Germany to the north, Slovakia and Hungary to the east, Slovenia and Italy to the south, and Switzerland and Liechtenstein to the...
n emperor Rudolph II in Vienna
Vienna
Vienna is the capital and largest city of the Republic of Austria and one of the nine states of Austria. Vienna is Austria's primary city, with a population of about 1.723 million , and is by far the largest city in Austria, as well as its cultural, economic, and political centre...
(1575–1578). He then became professor
Professor
A professor is a scholarly teacher; the precise meaning of the term varies by country. Literally, professor derives from Latin as a "person who professes" being usually an expert in arts or sciences; a teacher of high rank...
in medicine at the University of Leiden in 1582, and remained there until his death.

Dodoens' herb
Herb
Except in botanical usage, an herb is "any plant with leaves, seeds, or flowers used for flavoring, food, medicine, or perfume" or "a part of such a plant as used in cooking"...
al Cruydeboeck with 715 images (1554) was influenced by that of Leonhart Fuchs
Leonhart Fuchs
Leonhart Fuchs , sometimes spelled Leonhard Fuchs, was a German physician and one of the three founding fathers of botany, along with Otto Brunfels and Hieronymus Bock .-Biography:...
. He divided the plant kingdom in six groups. It treated in detail especially the medicinal herbs, which made this work, in the eyes of many, a pharmacopoeia
Pharmacopoeia
Pharmacopoeia, pharmacopeia, or pharmacopoea, , in its modern technical sense, is a book containing directions for the identification of samples and the preparation of compound medicines, and published by the authority of a government or a medical or pharmaceutical society.In a broader sense it is...
.

It was translated first into French
French language
French is a Romance language spoken as a first language in France, the Romandy region in Switzerland, Wallonia and Brussels in Belgium, Monaco, the regions of Quebec and Acadia in Canada, and by various communities elsewhere. Second-language speakers of French are distributed throughout many parts...
in 1557 by Charles de L'Ecluse (Histoire des Plantes), into English
English language
English is a West Germanic language that arose in the Anglo-Saxon kingdoms of England and spread into what was to become south-east Scotland under the influence of the Anglian medieval kingdom of Northumbria...
(via L'Ecluse) in 1578 by Henry Lyte
Henry Lyte (botanist)
Henry Lyte was an English botanist and antiquary. He is best known for two works, A niewe Herball , which was a translation of the Cruydeboeck of Rembert Dodoens , and an antiquarian volume, The Light of Britayne , both of which are dedicated to Queen Elizabeth I.-Life:Henry Lyte was born at...
(A new herbal, or historie of plants), and later into Latin in 1583. In his times, it was the most translated book after the Bible
Bible
The Bible refers to any one of the collections of the primary religious texts of Judaism and Christianity. There is no common version of the Bible, as the individual books , their contents and their order vary among denominations...
. It became a work of worldwide renown, used as a reference book for two centuries.

Dodoens's last book, Stirpium historiae pemptades sex (1583) was the Latin translation of his Cruydeboeck. It was used as a source by John Gerard
John Gerard
John Gerard aka John Gerarde was an English herbalist notable for his herbal garden and botany writing. In 1597 he published a large and heavily illustrated "Herball, or Generall Historie of Plantes", which went on to be the most widely circulated botany book in English in the 17th century...
for his Herball.

Dodoens is commemorated in the plant genus Dodonaea
Dodonaea
Dodonaea is a genus of about 70 species of flowering plants in the soapberry family, Sapindaceae, with a cosmopolitan distribution in tropical, subtropical and warm temperate regions of Africa, the Americas, southern Asia and Australasia. By far the highest species diversity is in Australia...
, which was named after him by Carolus Linnaeus
Carolus Linnaeus
Carl Linnaeus , also known after his ennoblement as , was a Swedish botanist, physician, and zoologist, who laid the foundations for the modern scheme of binomial nomenclature. He is known as the father of modern taxonomy, and is also considered one of the fathers of modern ecology...
. Dodoens indicates Rembert Dodoens when citing a botanical name. 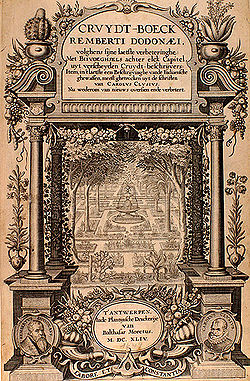