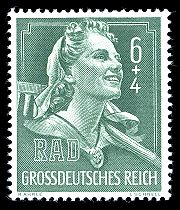 The Reichsarbeitsdienst (or RAD, Reich Labour Service) was an institution established by Nazi Germany
Nazi Germany
Nazi Germany , also known as the Third Reich , but officially called German Reich from 1933 to 1943 and Greater German Reich from 26 June 1943 onward, is the name commonly used to refer to the state of Germany from 1933 to 1945, when it was a totalitarian dictatorship ruled by...
as an agency to reduce unemployment, similar to the relief programs in other countries. During the Second World War it was an auxiliary formation which provided support for the Wehrmacht
Wehrmacht
The Wehrmacht – from , to defend and , the might/power) were the unified armed forces of Nazi Germany from 1935 to 1945. It consisted of the Heer , the Kriegsmarine and the Luftwaffe .-Origin and use of the term:...
.

The RAD was formed during July 1934 as the official state labour service. The RAD was an amalgamation of the many labour organisations formed in Germany during the times of the Weimar Republic
Weimar Republic
The Weimar Republic is the name given by historians to the parliamentary republic established in 1919 in Germany to replace the imperial form of government...
. RAD members were to provide service for various civic, military and agricultural construction projects. Konstantin Hierl
Konstantin Hierl
Konstantin Hierl was a major figure in the administration of Nazi Germany. He was the head of the Reichsarbeitsdienst and an associate of Adolf Hitler before he came to power.Hierl was born in Parsberg, Bavaria...
was its director during the organization's entire lifetime.

The RAD was composed of 40 districts each called an Arbeitsgau (lit. Work District). Each of these districts was headed by an officer with headquarters staff and a Wachkompanie (Guard Company). Under each district were between six and eight Arbeitsgruppen (Workers Groups), battalion-sized formations of 1200-1800 men. These groups were divided into six company
Company (military unit)
A company is a military unit, typically consisting of 80–225 soldiers and usually commanded by a Captain, Major or Commandant. Most companies are formed of three to five platoons although the exact number may vary by country, unit type, and structure...
-sized RAD-Abteilung units. Each rank and file RAD man was supplied with a spade and a bicycle. The RAD symbol, an arm badge in the shape of an upward pointing shovel blade, was displayed on the upper left shoulder of all uniforms and great-coats worn by all personnel.

The RAD was classed as Wehrmachtgefolge (lit. Armed Forces Auxiliaries). Auxiliary forces with this status, while not a part of the Armed Forces themselves, provided such vital support that they were given protection by the Geneva Convention. Some, including the RAD, were militarised.

During the early war Norwegian and Western campaigns, hundreds of RAD units were engaged in supplying frontline troops with food and ammunition, repairing damaged roads and constructing and repairing airstrips.
Throughout the course of the war, the RAD were involved in many projects. The RAD units constructed coastal fortifications (many RAD men worked on the Atlantic Wall
Atlantic Wall
The Atlantic Wall was an extensive system of coastal fortifications built by Nazi Germany between 1942 and 1944 along the western coast of Europe as a defense against an anticipated Allied invasion of the mainland continent from Great Britain.-History:On March 23, 1942 Führer Directive Number 40...
), laid minefields, manned fortifications, and even helped guard vital locations and prisoners.

The role of the RAD was not limited to combat support functions. Hundreds of RAD units received training as anti-aircraft units and were deployed as RAD Flak Batteries. Several RAD units also performed combat on the eastern front as infantry. As the German defences were devastated, more and more RAD men were committed to combat. During the final months of the war RAD men formed 6 major frontline units, which were involved with serious fighting. On the western front Reicharbeitsdienst troops were used as reinforcements to the 9SS Engineer Abt (SS-Captain Moeller) in the fighting to retake the northern end of the Arnhem bridge from British Paratroopers under Col. Frost. This action was during Operation Market-Garden, September, 1944. It was noted that the troops had no combat experience. SS-Captain Moeller's report concluded: "These men were rather sceptical and reluctant at the beginning, which was hardly surprising. But when they were put in the right place they helped us a lot; and in time they integrated completely, becoming good and reliable comrades." Losses for these troops were in the hundreds.